Around 300 secondary students from 50 schools have gathered under the “Bad Students” banner in front of the Education Ministry in Bangkok amid tight security.

They revisited the ministry on Saturday afternoon to repeat their three demands: stop harassing them, scrap outdated regulations and reform the educational system.

The students also delivered an ultimatum — the education minister must resign if he could not meet their demands.

The students sported white ribbons that have become a symbol of the broader youth-led protest movement in recent months. They also blew whistles — mocking Education Minister Nataphol Teepsuwan, a former co-leader of the People’s Democratic Reform Committee, known for blowing whistles to shame those they disapproved of.

They also erected cutouts of Mr Nataphol in a superman outfit and the costumes he wore when he led the PDRC protests, so that demonstrators could take photos with them.

Blasting through the speakers, meanwhile, was a song called Adults … Good Adults, modified from the traditional Children …Good Children, which lists 10 desired qualities of a young person.

The 10 qualities of “good adults”, which the students merrily sang along with, were: be open about religions, value other human beings, have consideration, use kind words, think rationally, respect people with different views, listen to minors once in a while, get rid of self-pride, do not limit experiences, set a good example, and learn to apologise.

Speakers on the stage also issued a caution about children’s rights and a warning against the use of photographs that could identify rally-goers. Some local media have been criticised for publishing images from an earlier event of young people who did not want their families to know they were there.

One speaker talked about harassment at schools by teachers, who always claimed good intentions when they did so. “They always claim students who are beaten are less than 1% of all, which is not true. Some [teachers] even persuaded students to have sex in exchange for good grades. And they are teachers under the ministry,” the speaker said.

Elaborating on their second demand, they said they were done with outdated regulations that they had no part in making. “We should have the right to dress the way we want because it doesn’t affect our ability to learn in any way,” said a speaker.

They also say the current educational system is old-fashioned and aims to draw a line for students to follow without telling them why. “We’re in a system where we’re programmed to obey. Today we come to demand things that we should have had because of the flaws at the ministry.”

“Thai education has made us puppets,” 18-year-old Supicha “Menu” Chailom said. “We are not robots of the system, we are the youth and have the right to express ourselves.”

At 5pm, the students blew whistles calling on Mr Nataphol to come and debate them. The minister, who was strolling inside the walls, talked to a group of students about the format and then agreed to take part.

“The issues that the youth raised are things we can come to an understanding on as long as we respect each other and the rules,” he said.

The event was the second gathering by the Bad Students at the ministry. At the first rally on Aug 19, when Mr Nataphol attempted to take the stage to address the crowd, he as told to go to the back of the queue — just like at school. He did as he was asked and sat down to talk with his young critics.

The teen movement has been communicating extensively via Twitter and one of their hashtags, #หนูรู้หนูมันเลว was the top trending in the country on Saturday. 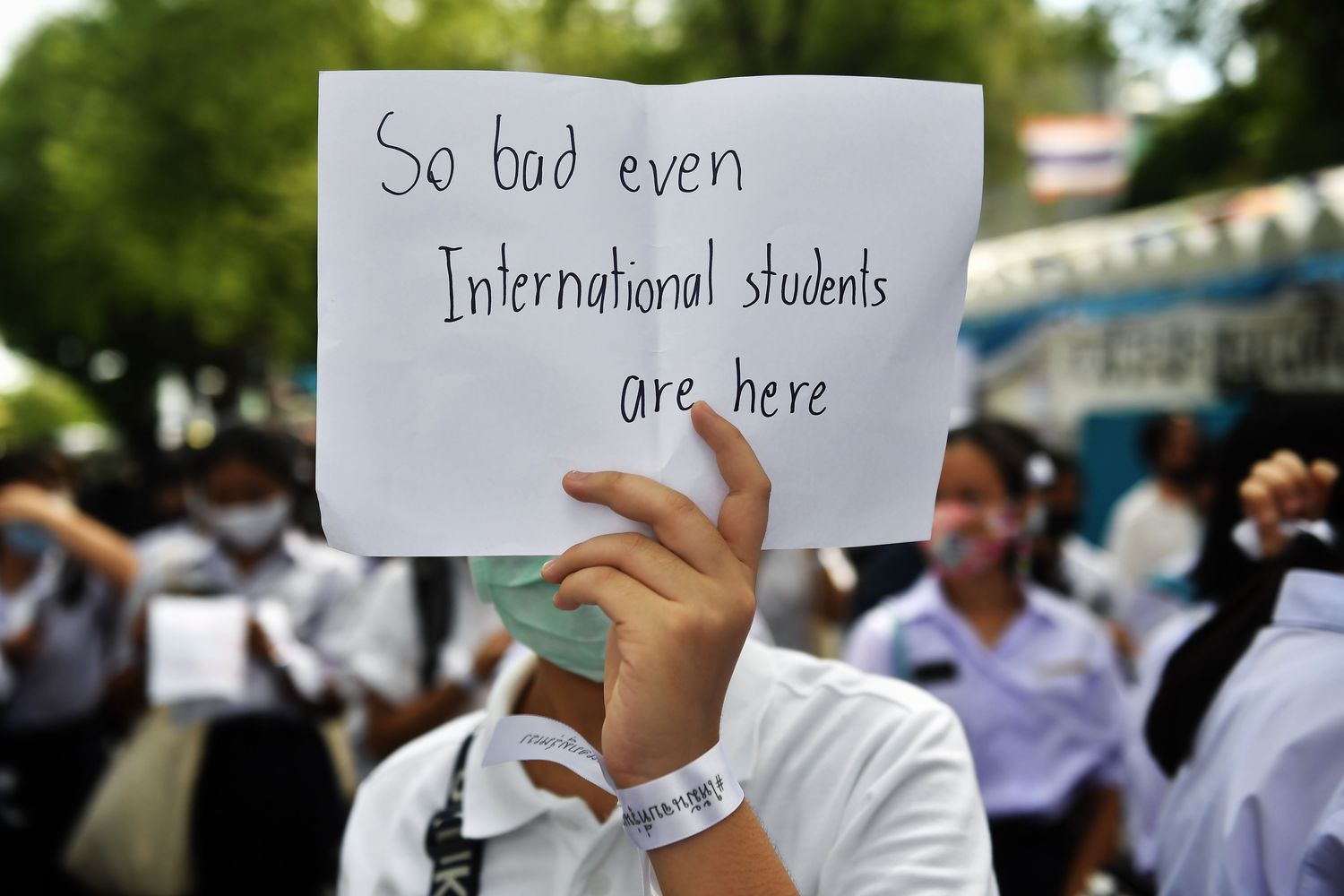 A student speaks his mind at Saturday’s protest. International school students, many of them the children of the wealthy and connected, have been criticised for appearing to have little interest in the protest movement. (AFP photo)