Suspect Arnon Kiram, 21, is caught in a field near his house in Tha Luang district, Lop Buri on Tuesday. (Photo supplied)

Three more members of a major drug network operating in the Central Plains region have been arrested in the adjoining provinces of Lop Buri and Sing Buri.

The arrests brought the total number of gang members held to 16. The network is alleged to have had about one billion baht in circulation.

In the first operation, narcotics suppression officers from the Sayob Pairee task force on Tuesday arrested Arnon Kiram, 21, in a field about one kilometre from his house in tambon Tha Luang district of Lop Buri.

Pol Lt Gen Chinnapat Sarasin, commissioner of the Narcotics Suppression Bureau, said  officers first went to his house, but was locked from the outside. They entered the premises and found a fan was still turned on.

The officers then flew a camera drone over the surrounding area and saw a man running into a corn field. The man was subsequently caught. It was Mr Arnon.

The suspect was wanted on an arrest warrant for colluding in the illicit drug trade.

He is the alleged right-hand man of Jittaphan Meemuang, alias Jun Bordin, an arrested  major dealer in the Central Plains, particularly in Sing Buri and Lop Buri. Mr Arnon runs a soil excavation business and restaurant as a front for his illicit activities, according to police.

Mr Arnon admitted he knew of Jun’s drug network but denied being part of it. He said a member of the network had previously asked him to transfer some money at an ATM, but the amount was not large.

He said he fled because an employee at his restaurant phoned to tell him that police were there looking for him. This frightened him, so he ran to hide.

Another team arrested Pornthep Phucharoenwanit, 30, who was in the monkhood. He was found collecting alms at a village in Muang district of Sing Buri. He was expelled from the order by the temple abbot and then also charged with colluding in the drug trade.

The team also searched a house in Bang Rachan district of Sing Buri, where they arrested Atchariya Chuenchom, 30.

Both Mr Pornthep and Mr Atchariya were also members of Jun’s drug network, according to Pol Lt Gen Chinnapat. Their job was to find new customers and collect money.

Police allege that Mr Jitaphan, or Jun, smuggled illicit drugs from northern border provinces and stored them at a warehouse in Sing Buri province. Members of his network sold the drugs to customers.

He allegedly entered the drug trade in 2010. A court issued a warrant for his arrest in 2018.  Narcotics suppression officers caught him in Sing Buri on June 14 this year.

Authorities had seized more than 50 million baht worth of assets from them, including  three houses, 12 cars, 11 bank accounts, 3 million baht in cash, and motorcycles and mobile phones. 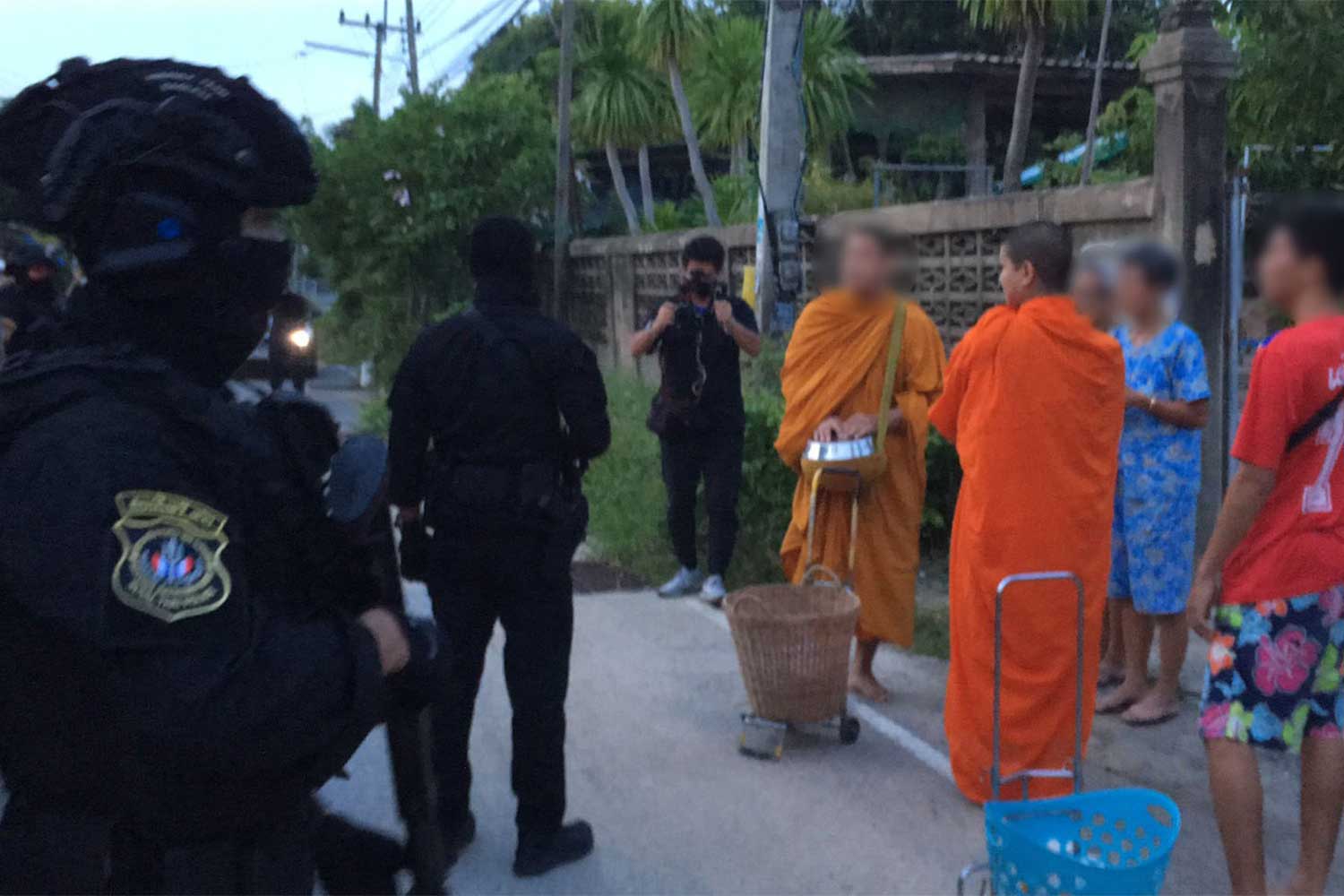 A monk, 30, left, is arrested in Muang district, Sing Buri, on drug charges. Pornthep Phucharoenwanit was expelled from the monkhood and then charged. (Photo supplied)