show of force: Protesters are met by security officers as they converge on the grounds of Sanam Luang yesterday after they moved from the adjacent Thammasat University's Tha Prachan campus.

For many young people attending yesterday's rally, the protest was their first taste of a political gathering.

They shared a similar hope to see what they described as "equality" and "real democracy", although many admitted that their wishes may not come true this time.

She and her mother had signed a petition calling for a charter rewrite.

"I know violence may erupt at the gathering and I couldn't help feeling afraid of what would happen. But I have to be here. Although we won't win today, we will continue fighting for a better future for Thailand," she said.

She said she would try to stay at the gathering for as long as possible but would not stay overnight day as some members of the United Front of Thammasat and Demonstration, the organiser of the two-day demonstration, intended to do.

Toei's mum, 48, said a lack of equality and justice, along with persistent double standards and hierarchal unfairness in Thai society, had prompted them to take part.

"I'm not afraid of anything … I've told my daughter if she is worried about my safety and loves me, she will have to come to the protest," said the mother.

Ink, a Mathayom 4 student at a school in Bangkok, said she hoped to see real democracy and equality in society as well.

She said she might not understand much about charter amendments but all she wanted was equality in society.

"For me, this gathering is a learning experience. It's my first political rally," she said.

It was also the first time for Mac, a 14-year-old student from Ratchaburi. He said he travelled with his uncle to Bangkok to gather a first-hand taste of a political rally. He said he would have to return home to Ratchaburi before the last public vans leave.

"I may not be familiar with the 10 demands put forward by the protest organisers but I think Prime Minister Gen Prayut [Chan-o-cha] had better go now because he has not made Thailand a better country," he said. The demands include charter and monarchical reforms. 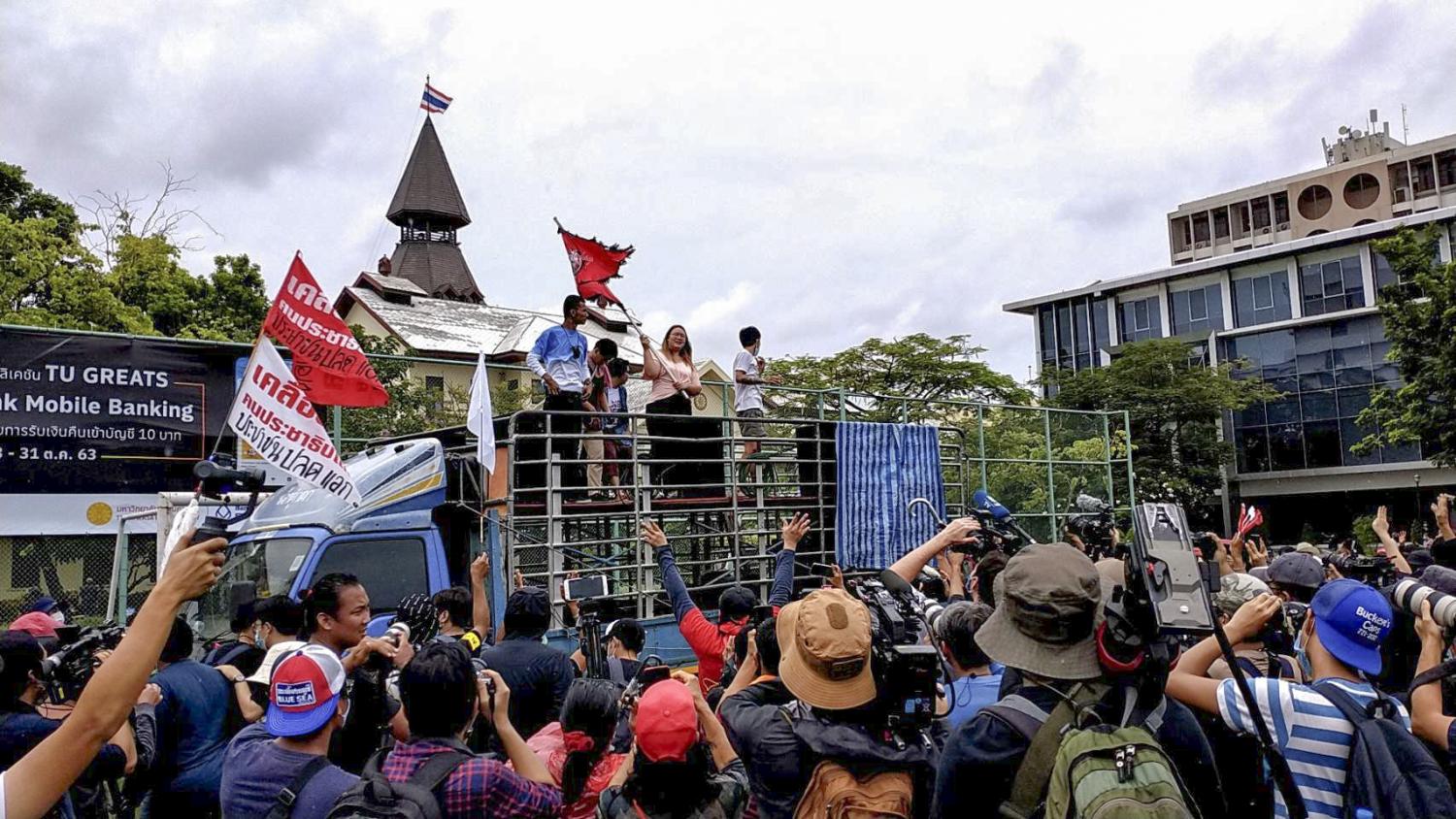 Flying the flag: Panusaya 'Rung' Sithijirawattanakul raises a protest flag before supporters at Thammasat University's Tha Prachan campus. She is a co-leader of the United Front for Thammasat and Demonstration. 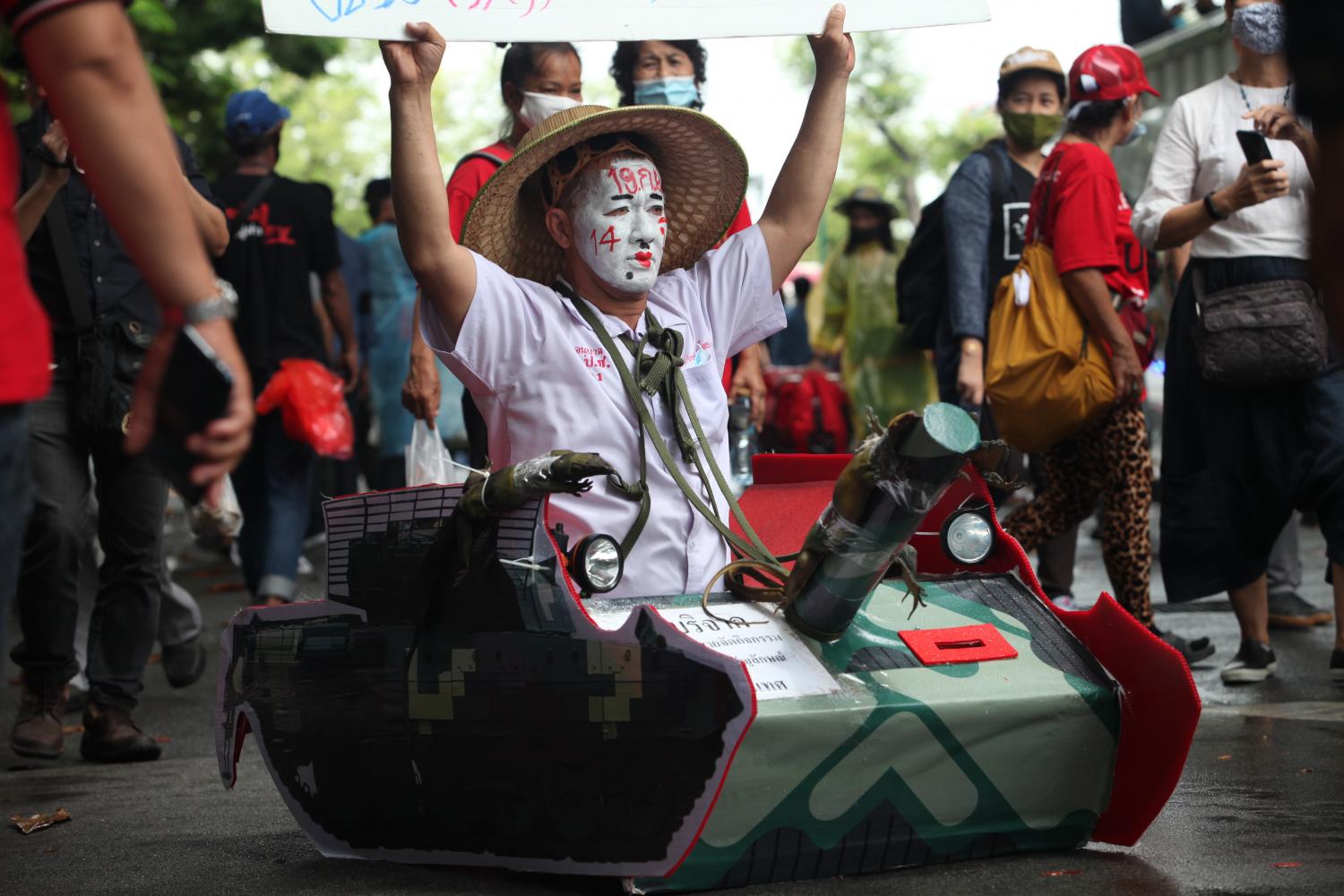 Military mock-up: A man sits in a small replica tank made of cardboard at the protest site at Thammasat University. 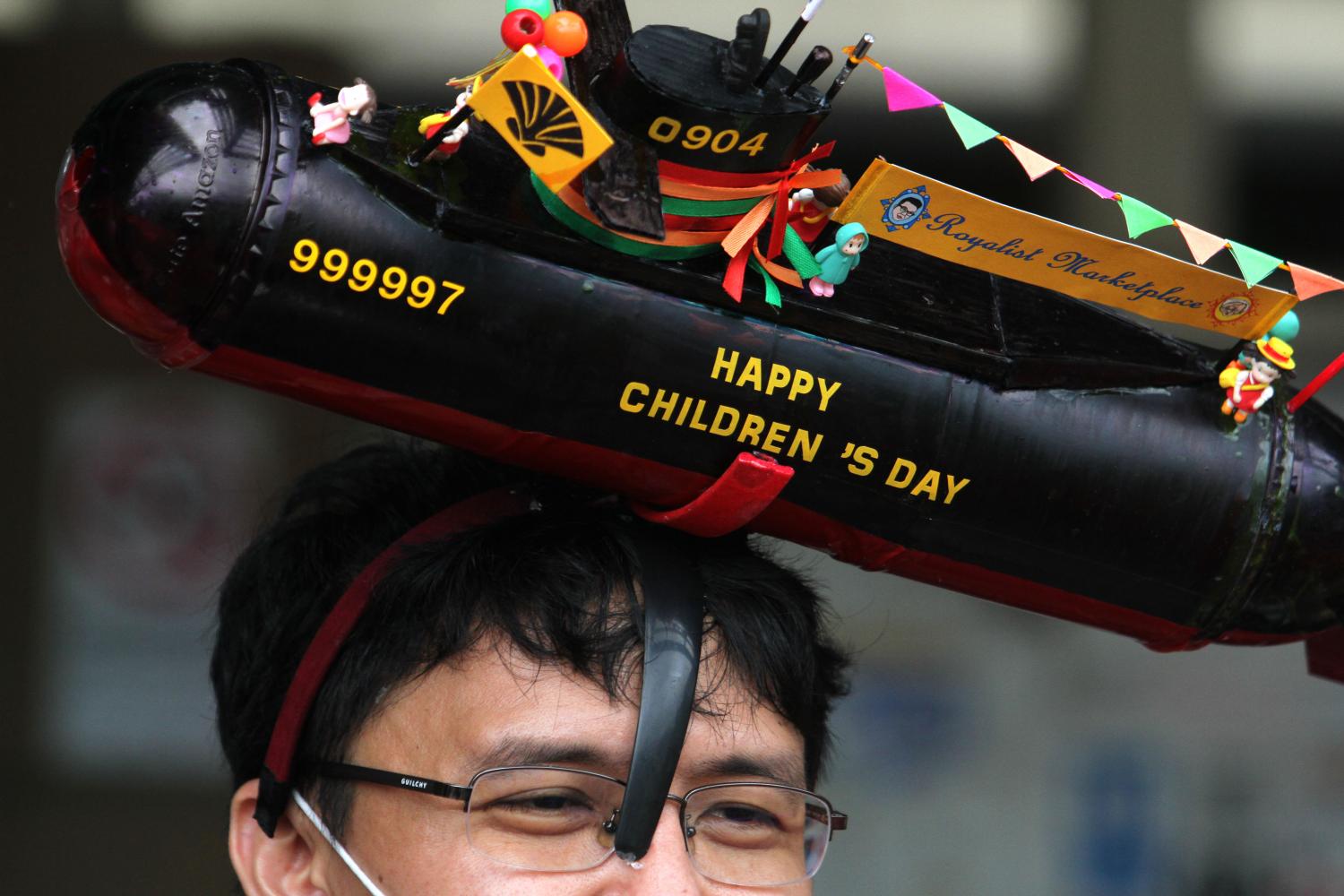 sub standard: A protester shows off headwear adorned with a replica submarine to symbolise his anti-military stance. 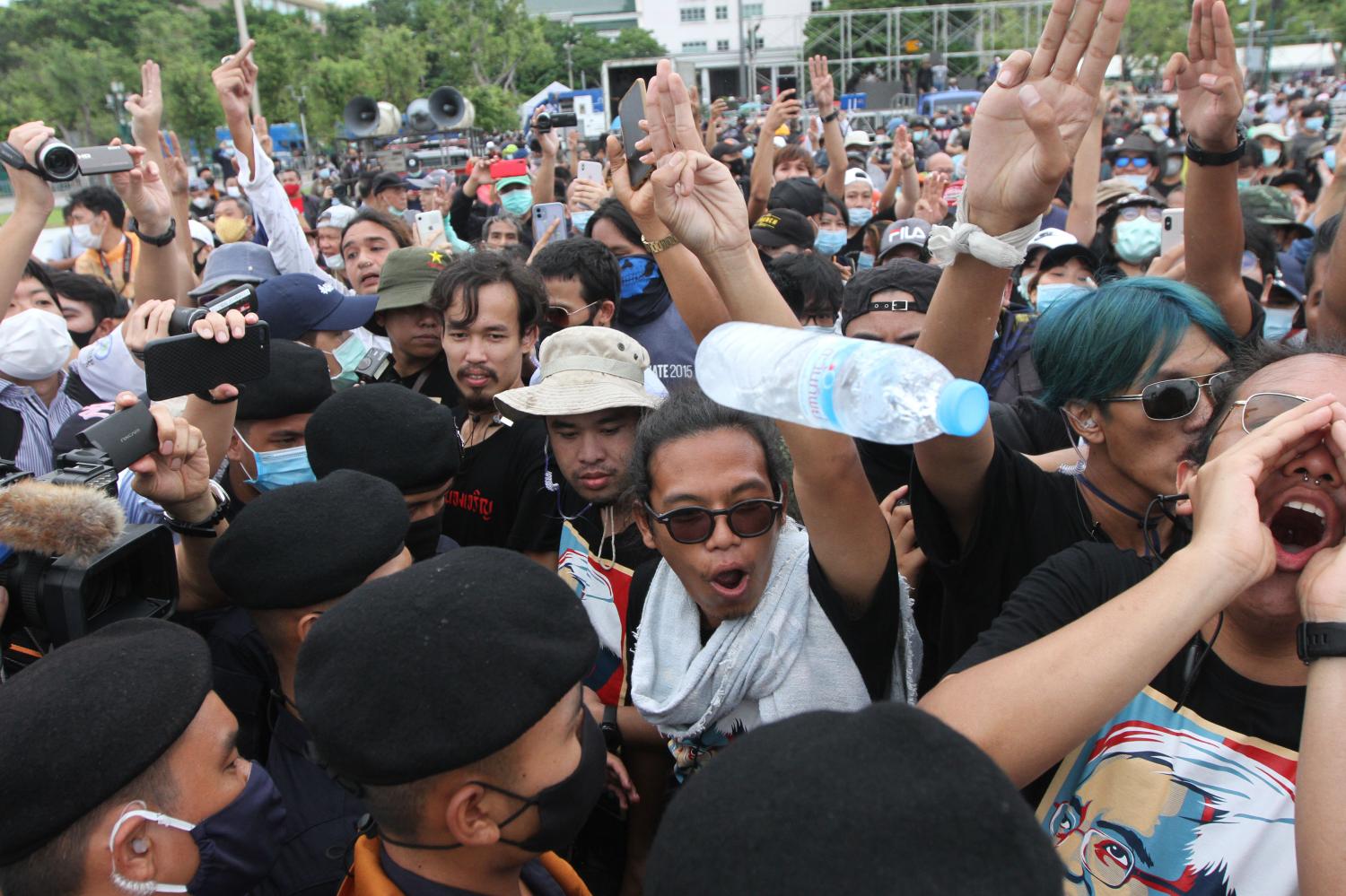 push and shove: Protesters try to push their way into Sanam Luang only to be confronted by security officers. The protesters later gained access to the grounds. 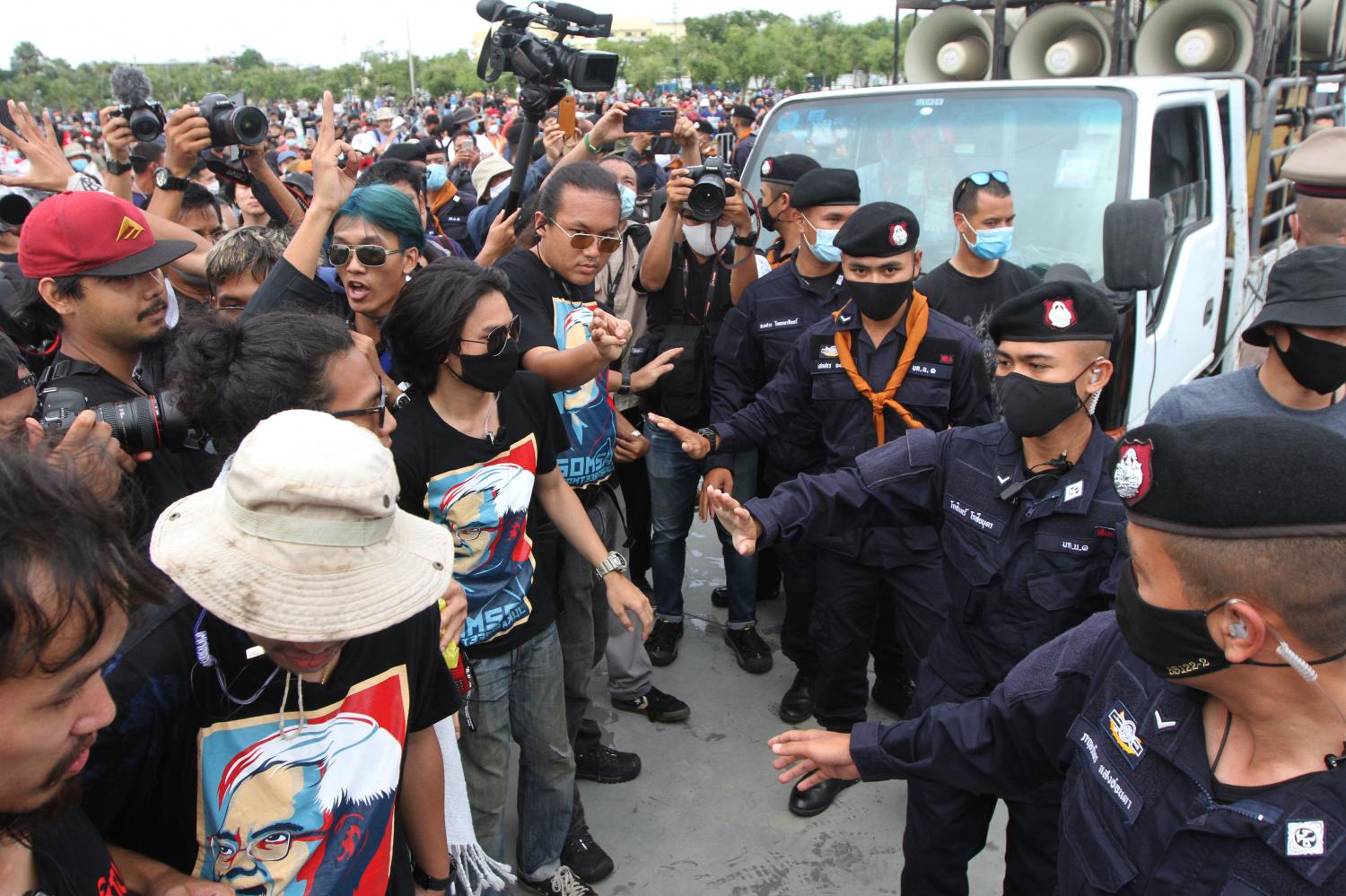 social distancing: Security officers try to keep protesters out of a section of Sanam Luang.