Visitors, mainly Thais, take pictures at the Temple of Emerald Buddha in the compound of the Grand Palace, which reopened to the public in June after months of closure due to the Covid-19 pandemic. Wichan Charoenkiatpakul

The Centre for Covid-19 Situation Administration (CCSA) on Monday approved in principle the entry of foreign nationals to the kingdom including business visitors and tourists to help the country recover from the blows inflicted by the Covid-19 pandemic.

It also agreed to extend the state of emergency for another month until Oct 31 as the global health crisis was not resolved and the virus outbreak in Myanmar was worsening.

CCSA spokesman Taweesilp Visanuyothin said on Monday the easing of travel restrictions was necessary to help many businesses fight the economic downturn and the CCSA meeting, chaired by Prime Minister Prayut Chan-o-cha, endorsed a proposal to welcome in foreign visitors.

They are holders of non-immigrant types of visa who are business people without a work permit; long-stay tourists with a Special Tourist Visa (STV) recently authorised by the government; holders of an Asia Pacific Economic Cooperation Business Travel Card from low-risk countries; and foreigners who wish to stay in Thailand for at least 60 days.

He said the proposal also included a group of foreign athletes participating in the Princess Maha Chakri Sirindhorn's Cup Tour of Thailand 2020 from Oct 6-16 and a group of 340 pilots and crew of Thai Airways International on repatriation flights.

The foreign cyclists will be placed in quarantine for 14 days at the Rattanakosin Hotel before taking part in the interprovincial event from Samut Songkhram, Phetchaburi, Prachuap Khiri Khan, Chumphon and Ranong to Surat Thani.

According to Dr Taweesilp, every group would be required to observe disease control measures and some groups would need to provide a six-month bank statement proving funds of at least 500,000 baht.

The CCSA also approved a proposed leg of the Badminton World Federation tour to be held here in January next year.

Gen Prayut said on Monday the CCSA meeting had discussed reopening the country with a focus on business travellers and tourists while putting in place measures to monitor foreign arrivals and minimise the risk of infections.

He stressed the government would have to come up with a comprehensive plan to drive the economy over the next three months and urged the public to comply with the regulations.

"We must get the economy going over the next three months. If we do nothing, it could get worse," he said. 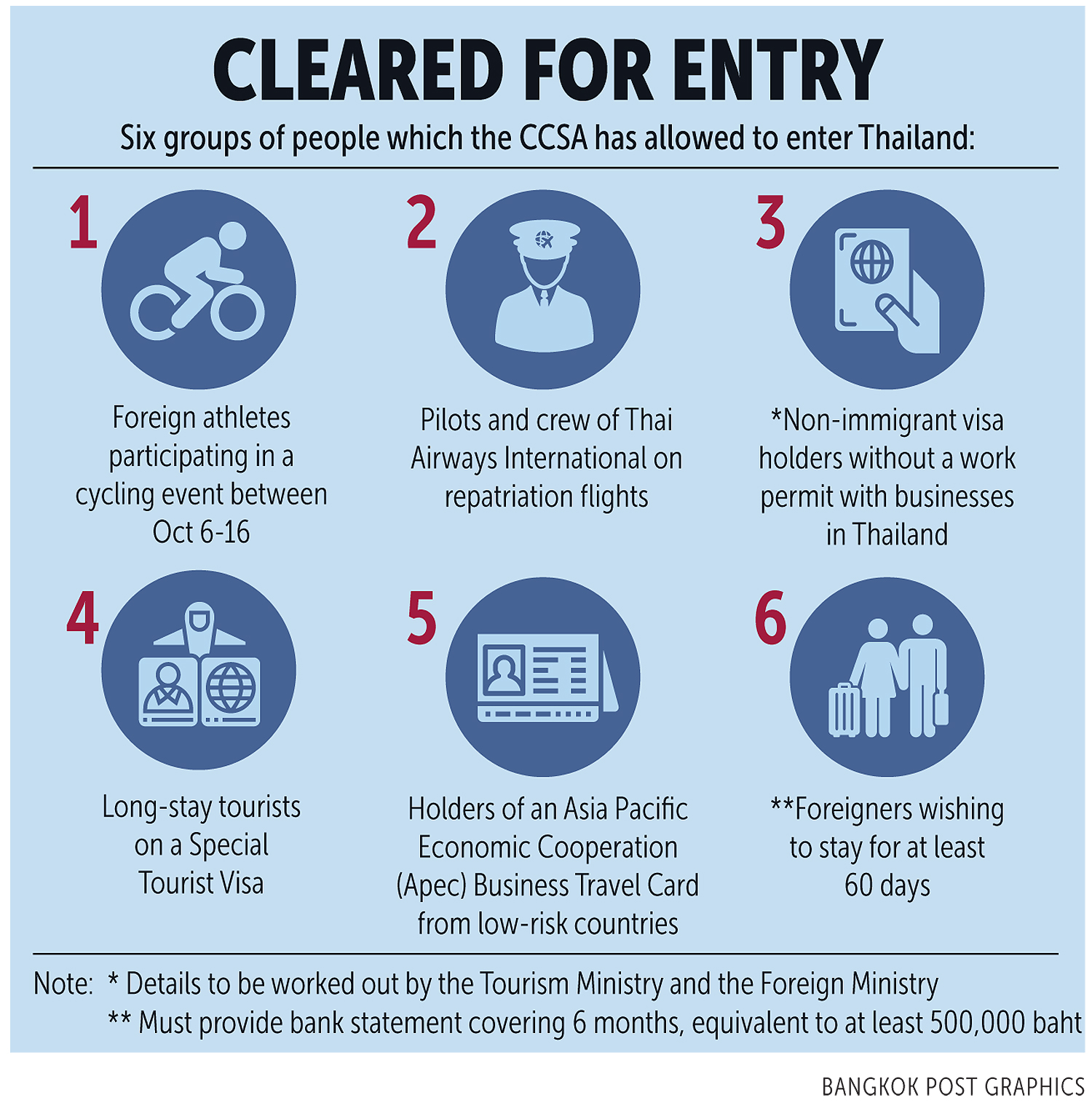 Deputy Prime Minister and Public Health Minister Anutin Charnvirakul said on Monday the easing of travel restrictions had to proceed and insisted the public health community is well-equipped to respond.

Asked about the proposed shortening of the quarantine period, he said the issue is still being debated by concerned parties, but admitted that strict measures may not be necessary for those who arrive from very low-risk countries.

Travel bubble plans might be considered for countries where infections are extremely low, he said.

When asked whether government will continue pushing for the "Phuket Model" to welcome in long-stay foreign tourists, Mr Anutin said there is no longer a "Phuket Model". The Phuket plan encountered opposition and caused a lot of confusion so officials had decided to drop it.

National Security Council secretary-general Somsak Roongsita said the one-month extension of the emergency decree will be forwarded to the cabinet for approval today and was purely for the purpose of public health.

It will be the sixth such extension since the initial order in March. The emergency rules allow the government to enforce mandatory quarantines and streamline disease-control plans without multiple approvals from various agencies.

Meanwhile, Tourism and Sports Minister Phiphat Ratchakitprakarn said on Monday the Interior Ministry will draft regulations related to the granting of STVs and submit them to the Council for State for review.

Mr Phiphat said he expects the regulations, which need the prime minister's signature to take effect, to be in place next month when the first international arrivals are expected. Among them is a group of 150 Chinese tourists from Guangzhou who plan to arrive in Phuket on a chartered flight on Oct 8.

He said that shortening the quarantine period from 14 days to seven days was a possibility but it has to be implemented step by step.

The ministry has proposed halving the period to seven days in mid-November if the first two groups of 300 foreigners complete their 14-day quarantine on Oct 15 and Oct 21 without a positive case.

Tourism is an important part of the economy, contributing about one-fifth of GDP. The pandemic has devastated an industry which provided more than 3 trillion baht in revenue from about 40 million foreign visitors in 2019.