'Nong Chompoo' case: No warrants yet

New national police chief Suwat Jangyodsuk, centre, leads a briefing held on Friday in Bangkok to update the public on the progress of the investigation into the mysterious death of Orawan “Nong Chompoo” Wongsricha in May. (Photo: Apichit Jinakul)

Investigators have gathered a huge trove of evidence in the disappearance and death of “Nong Chompoo”, a 3-year-old girl in Mukdahan, but it is still not enough to make an arrest, the country’s new police chief said on Friday.

One thing is clear, though: the toddler could not have walked the two kilometres on her own to the place where her body was found on May 14, said Pol Gen Suwat Jangyodsuk.

He made the comment at a briefing held in Bangkok to update the public on the case, saying there were some details that police wanted to make public. However, it did not mean the investigation was wrapped up, he added.

Orawan “Nong Chompoo” Wongsricha disappeared from her home in a village in Dong Luang district, near Phu Pha Yon in Mukdahan on May 11. Her parents had gone to run errand, so they let their older daughter look after the child. She reportedly told police that her little sister had simply wandered off and disappeared. Her naked body was found three days later in a forest in Phu Pha Yon National Park.

The case attracted national interest but also touched off a media feeding frenzy, with two TV stations in particular treating it like a reality show with daily updates. One person that some believed to be a suspect became a minor celebrity.

Pol Gen Suwat said officers initially expected to press charges of depriving a child, unlawful detention causing death and concealment of a body. However, he said, they still lack sufficient evidence to seek a warrant to arrest anyone, even after four months of hard work. Investigators are still gathering evidence.

If investigators are unable to indict anyone within one year, they are required to submit their report to public prosecutors under police regulations, said the police chief. However, the investigation will continue even if the report is sent to the prosecution within the deadline.

The statute of limitations in the case is 20 years and investigators will not give up in their efforts to discover who the culprit was, said Pol Gen Suwat. 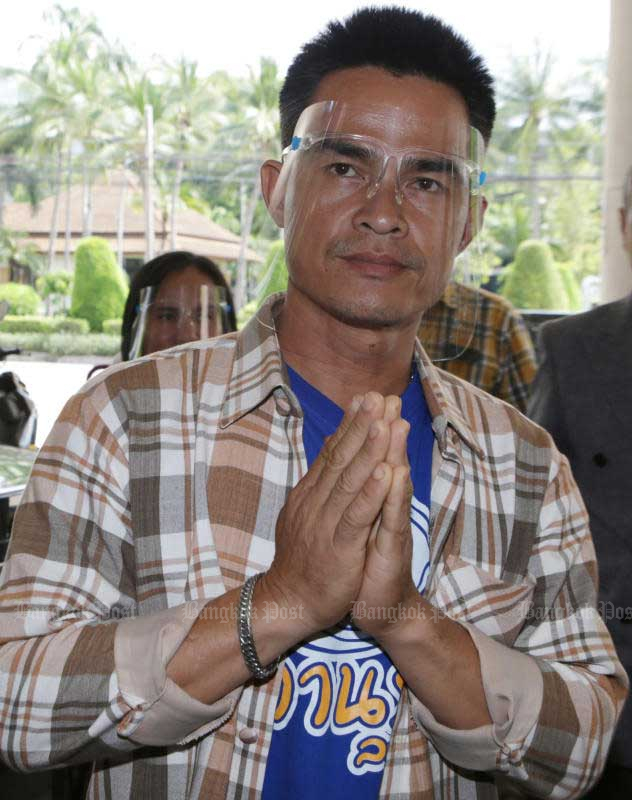 Chaiphol Wipha, the uncle-in-law of “Nong Chompoo”, attended Friday’s briefing on the case as he wanted police to clear lingering doubts that he was one of people suspected to have had a hand in the girl’s disappearance. (Photo: Apichit Jinakul)

In their 918-page report, investigators who studied the autopsy results insisted that Nong Chompoo could not have walked to the Phu Pha Noi forest, part of Phu Pha Yon National Park, on her own, said Pol Col Phadej.

Pol Gen Suwat said the family and relatives of the girl told police that she did not let other people carry her. It was possible that someone close to her might have carried her, or strangers might have forcibly taken her, or a combination of both, he added.

He outlined eight major points that investigators believe showed that the girl could not have walked to the place where she was found dead:

Given all these factors, investigators believed someone took the girl to the area and caused her death, directly or indirectly, said the police chief.

Mr Chaiphol, or Lung Phol (Uncle Phol) showed up as he wanted police to clear lingering doubts that he was one of people suspected to have had a hand in the girl’s disappearance.

Sawittree Wongsricha, the girl’s mother, had earlier raised doubts over the timeline of Mr Chaiphol’s activities on the day Nong Chompoo went missing.

When the story first came to public attention in May, two digital TV channels, Thairath and Amarin, devoted massive amounts of coverage to it, drawing criticism from child rights advocates about privacy violations.

The stations intensively interviewed Mr Chaiphol, his wife, the parents of Nong Chompoo and relatives. Shamans and others claiming to have magical powers of deduction descended on the village. Their claims to know who the suspect might be were widely reported.

TV audiences began to take sides, with some sympathetic to Mr Chaiphol and others backing Nong Chompoo’s parents. Some viewers even made the journey to Mukdahan to show support for the family.

After the girl’s mother raised doubts about Mr Chaiphol, some TV fans rallied to his side. A wealthy couple built a house for him, others donated money, and some businesses got him to promote their products. Luk Thung star Jintara Poonlarp even featured him in a video of her song Tao Ngoi.