The bus and train collided at a location in Chachoengsao province, around 50km east of Bangkok.

CHACHOENGSAO: Eighteen passengers were killed and 44 injured on Sunday when a bus collided with a train in Chachoengsao province, officials said, after earlier saying 20 had died.

The collision happened at about 8.05am at a railway crossing near Khlong Kwaeng Klan railway station, around 50 kilometres east of Bangkok, as the bus passengers were on their way to a temple for a ceremony to mark the end of Buddhist Lent, said a district police chief.

Provincial governor Maitree Tritilanond earlier told reporters that so far about 29 people were injured, but the number was revised upwards to 44, all but 13 of them discharged from hospital by early afternoon.

The injured were sent to Ban Pho, Phutthasothorn and Kasemrat hospitals in Muang district.

State Railway of Thailand governor Nirut Maneephan confirmed the death toll at the site of the crash to reporters.

Footage shared by a government department showed the bus edging from the road onto train tracks before a blue cargo train slammed into its side.

The bus was overturned on its side, the top of it ripped off, and rescue workers said a crane was needed to lift it. 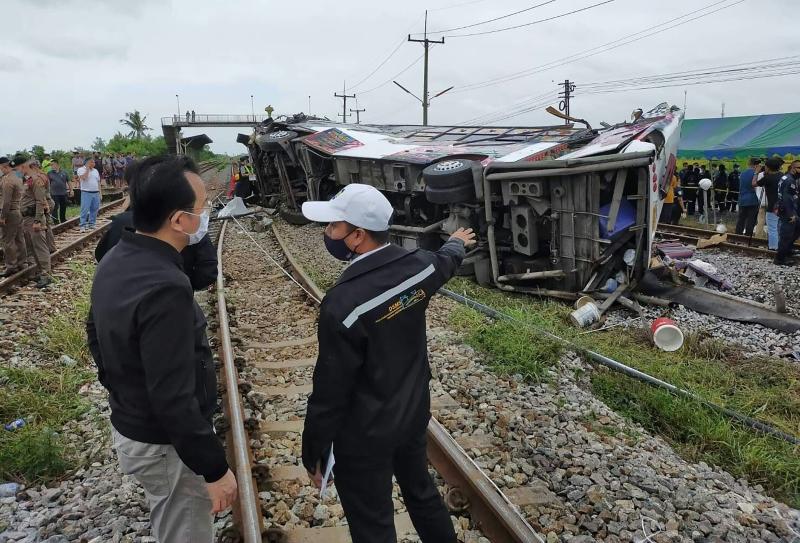 Officials stand near the wreckage of an overturned bus following a deadly collision with a train next to Khlong Kwaeng Klan railway station in Chachoengsao province. (AFP PHOTO / Ministry of Transport)

Freight train No 852 was plying the route between Laem Chabang and Hua Takhae railway stations when it hit the bus at the railway crossing in tambon Bang Toey in Chachoensao's Muang district..

Witnesses said the railway crossing had no barrier, but they heard the noise of a train alarm shortly before the horrific crash.

The bus was taking about 60 people from Samut Prakan province south of Bangkok to Wat Bang Pla Nak temple for the traditional tod kathin, an annual religious ceremony where Buddhists present monks with new robes and make merit to mark the end of the Buddhist Lent. 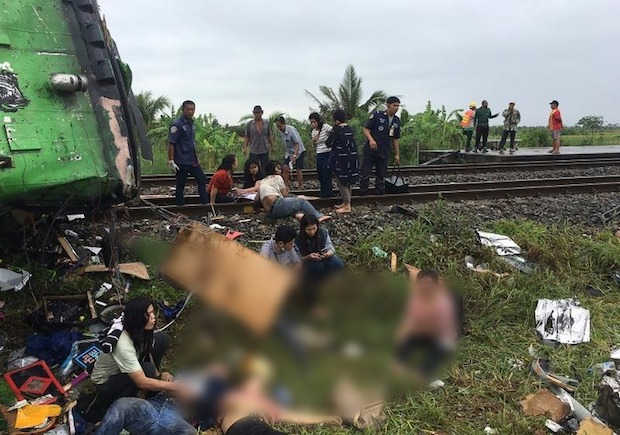 Victims of a collision between a train and bus next to Khlong Kwaeng Klan railway station in Chachoengsao province are seen on Sunday. (AFP PHOTO /Bangpakong Rescue Foundation)

Deadly accidents are common in Thailand, which regularly tops lists of the world's most lethal roads, with speeding, drunk driving and weak law enforcement all contributing factors.

According to a 2018 report by the World Health Organization, the kingdom has the second-highest traffic fatality rate in the world.

Though a majority of the victims are motorcyclists, bus crashes involving groups of tourists and migrant labourers often grab headlines.

In March 2018, at least 18 people were killed and dozens wounded when a bus carrying people returning from holiday in northeastern Thailand swerved off the road and smashed into a tree.