'Mike Rayong' taken to hospital after scuffle with police

An officer carries Panupong “Mike” Jadnok at the Pracha Chuen police station in Bangkok late Friday night. He reportedly fainted after a scuffle with police and was later taken to hospital. (AFP Photo)

Four detained protest leaders were granted temporary release on Friday but three of them were promptly rearrested and one of them ended up in hospital after struggling with police.

Mr Panupong, Mr Parit and Mr Patiwat were being detained at Bangkok Remand Prison and Ms Panusaya was at the Central Women’s Correctional Institution nearby.

Mr Patiwat walked out of Bangkok Remand Prison around 8pm to cheers from supporters waiting to greet him outside.

However, concern about the status of the remaining three rose after a Metropolitan Police Bureau car and a prisoner transport vehicle from the Pracha Chuen police station were seen entering the compound.

Noraseth Nanongtoom, a lawyer for THLR, said he suspected Mr Parit, Mr Panupong and Ms Panusaya would be detained in connection with other cases. The three were not allowed to meet their lawyer, he added.

Shortly after he spoke, the three were taken to the Pracha Chuen station to be booked on charges stemming from their participation in other protest events. A crowd of supporters quickly arrived on the scene.

Video images showed Mr Panupong slumped and being carried from a police van that had brought him from the prison to the station before being taken away in an ambulance. He is being treated at Praram 9 Hospital.

Thai Lawyers for Human Rights said the activist was not in danger but would be kept in hospital overnight. The group said it believed he passed out after being put in a chokehold in the van. Police were not immediately available for comment.

An officer had earlier said he had orders to take them from prison to the police station. A lawyer for the three said they were being taken away to be charged again, arguing that it was unlawful to do so because they had already pleaded not guilty to the same charges.

In chaotic scenes outside the police station, Mr Parit — who stripped off his shirt — and Ms Panusaya gave an impromptu address to scores of supporters who had gathered there. They challenged the legality of their rearrest and pledged to keep protesting peacefully.

“No matter what happens the movement will have to continue. We don’t want violence,” Ms Panusaya said.

They have denied all charges against them.

Mr Parit and Ms Panusaya along with Mr Patiwat — all Thammasat University students — are already facing charges of sedition, as well as other charges for their roles in a Sept 19 pro-democracy rally at Sanam Luang.

Mr Panupong has been charged with inciting unrest or sedition under Section 116 of the Criminal Code. He also faces charges of violating the Act on Ancient Monuments, Antiques, Objects of Art and National Museums, and violating Sections 116 and 215 for his role in installing a new plaque to symbolise people’s power at Sanam Luang on the morning of Sept 20.

Ms Panusaya and Mr Parit were arrested on Oct 15 in connection with a major rally held the previous day. They were held for four days, released and arrested again on Oct 21 and taken back to jail.

All told, more than 80 people have been arrested in connection with the protests staged in recent weeks, according to TLHR. Most are now free on bail but a handful remain behind bars.

Among those still in jail is human rights lawyer Arnon Nampha. He has been charged with sedition in connection with the events of Sept 19 and 20 at Thammasat University and Sanam Luang.

The Court of Appeal upheld a lower court refusal to allow Mr Arnon’s temporary release on Wednesday, but the decision was not made public until Friday.

Also denied bail earlier was activist Ekachai Hongkangwan, who was charged with causing harm to Her Majesty the Queen’s liberty during her motorcade on Oct 14. 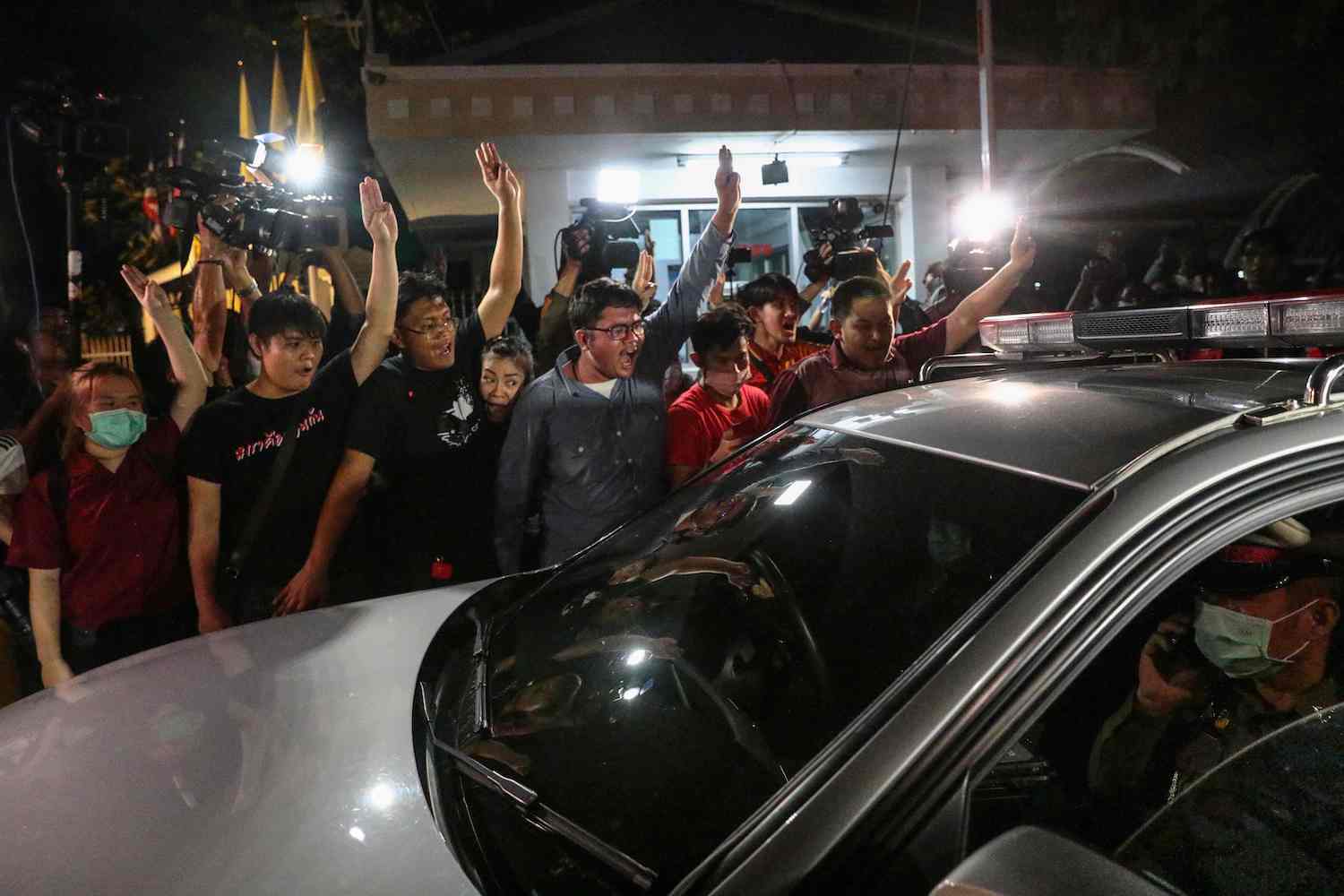 Protesters give the three-finger salute to a passing police car as they await the possible release of colleagues from the Bangkok Remand Prison on Friday night. (AFP Photo)