Phan Thopa, 50, during the crime re-enactment at his burned house in Nakhon Phanom on Friday. The man admitted using a hammer to beat his wife and their teenage son senseless, and setting fire to them. (Photo: Pattanapong Sripiachai)

NAKHON PHANOM: A man has been arrested on charges of beating his wife and their 14-year-old son to death with a hammer and setting fire to their bodies and their home on Thursday night.

He is also accused of chasing and attacking another woman with the hammer, before being overwhelmed and restrained by other neighbours.

Phan Thopa, 50, has been charged with with murder, arson and physical assault causing injury.

He was taken back to the partially burned house in tambon Kham Toei of Muang district for a re-enactment of the crime on Friday.

According to police, Mr Phan admitted having beaten his wife Anon Seedawong, 48, and their son Ekkararat Thopa, 14, on their heads with a hammer, rendering them bloody and senseless.

He covered them with blankets and clothing, poured petrol over them and then set it and the house alight, about 8pm on Thursday.

Mr Phan told police he had suffered mental problems for several years. He had not taken his medication for about three months.

Mr Phan had suffered mental problems and had delusions about someone assaulting him, depriving him of his wife and his son and taking all his belongings, he said.

He had not taken his medicine for more than 3 months and had been drinking alcohol.

He had attacked his wife with a hammer while she was doing housework on Thursday night. He then attacked his son with the same hammer. (continues below) 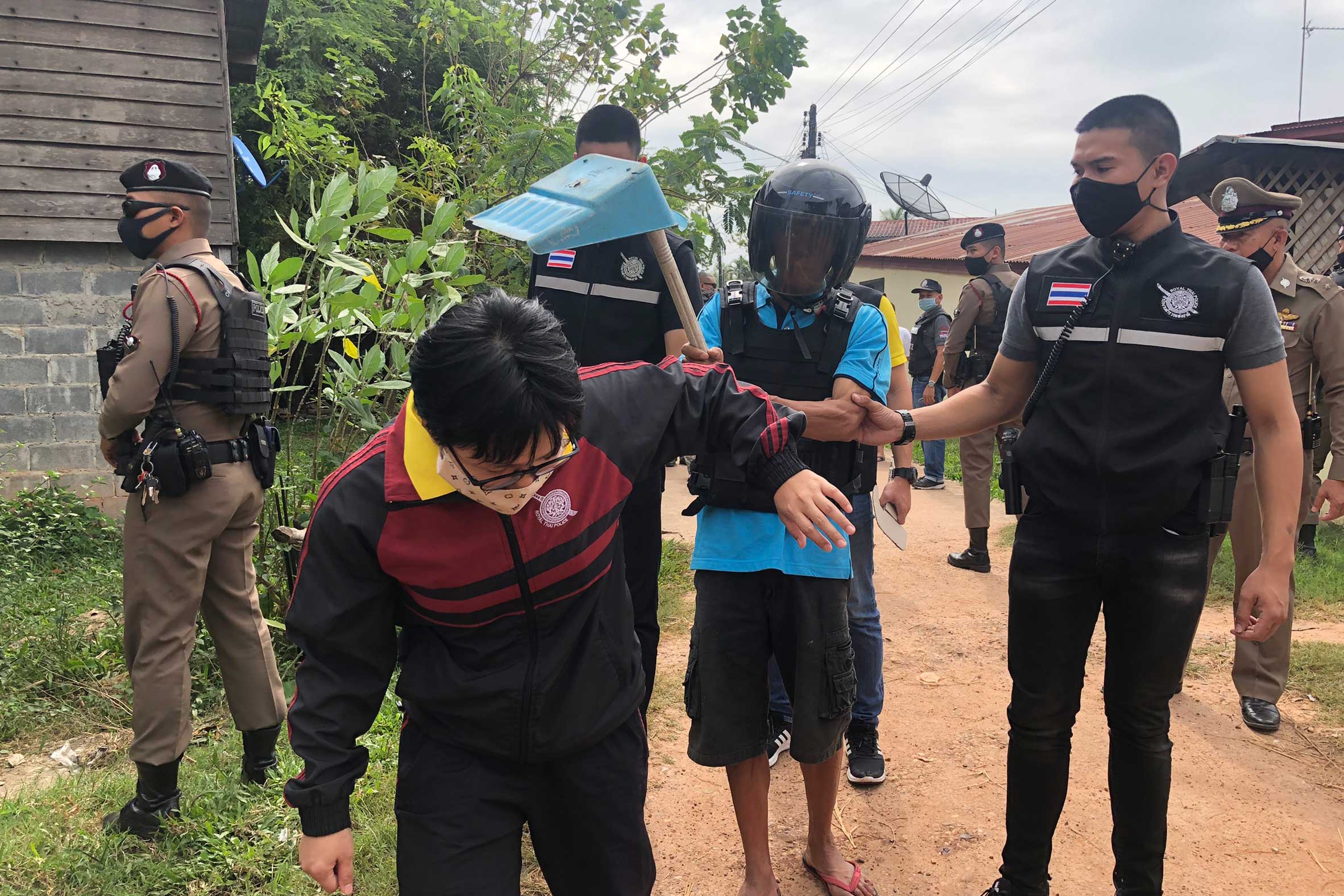 The 50-year-old suspect shows police how he attacked a neigbhour, during a re-enactment of the crime. (Photo: Pattanapong Sripiachai)

The couple had three sons. The eldest, aged 22, was a monk and the second, aged 18, was out at the time, Pol Maj Gen Thanachart said.

The injured neighbour, Lakhon Buata, 59,  said she heard sounds of the beating coming from inside the house, but did not realise what was happening. Mr Phan had been acting normally and showed no sign of aggression towards other people, she said.

Then she saw Mr Phan stalking towards her with a hammer in his hand, and there was smoke coming from his house.

She ran for her life as he began chasing her, and other neighbours came out of their houses to see what was happening, she said.