Hundreds of police take part in a cleaning activity outside the Royal Thai Police headquarters on Saturday following a huge anti-government rally on Wednesday during which demonstrators sprayed paint on structures outside the police headquarters. (Photo by Wassayos Ngamkham)

Prime Minister Prayut Chan-o-cha has thanked volunteers for cleaning up paint and graffiti at walls and streets outside the Royal Thai Police headquarters following the People's Movement rally at Ratchaprasong intersection on Wednesday.

Gen Prayut, also defence minister, praised the volunteers, members of the public and officials for taking part in cleaning the paint-stained walls and streets outside the police compound by the protesters during Wednesday’s rally, said government spokesman Anucha  Burapachaisri. Inappropriate graffiti at various spots in the area were also cleared.

A protest co-leader said they had acted out of anger after police had used water cannons and tear gas to stop them from approaching Parliament where a debate and vote on seven versions of the constitutional amendment bill were taking place on the same day. The bills would pave the way for a rewrite of the charter, one of their key demands.

At least 55 people were injured, 32 of whom by tear gas, and six were shot during clashes with a rival group of royalist demonstrators, according to data of the Erawan emergency medical unit of Bangkok Metropolitan Administration on Wednesday.

The bill the demonstrators supported, submitted by Internet Law Reform Dialogue, was later rejected by senators. The demonstrators subsequently assembled at the Ratchaprasong intersection near the police headquarters.

Mr Anucha said on Saturday the vandalism caused damage to the property of the state and private sector.

The prime minister hoped that demonstrators would exercise their rights within the framework of the law and express their views in a constructive manner, said Mr Anucha.

Pro-government yellow-shirt volunteers gathered in front of the Royal Thai Police Headquarters on Friday morning to clean paint left by anti-government protesters who demanded the resignation of Gen Prayut, constitutional changes and reform of the monarchy.

Spray paints caused damage to the fence and nameboard. Volunteers earlier helped clean up the paint-strained structures, he said.

On legal cases against those involved, police were gathering evidence, he added. 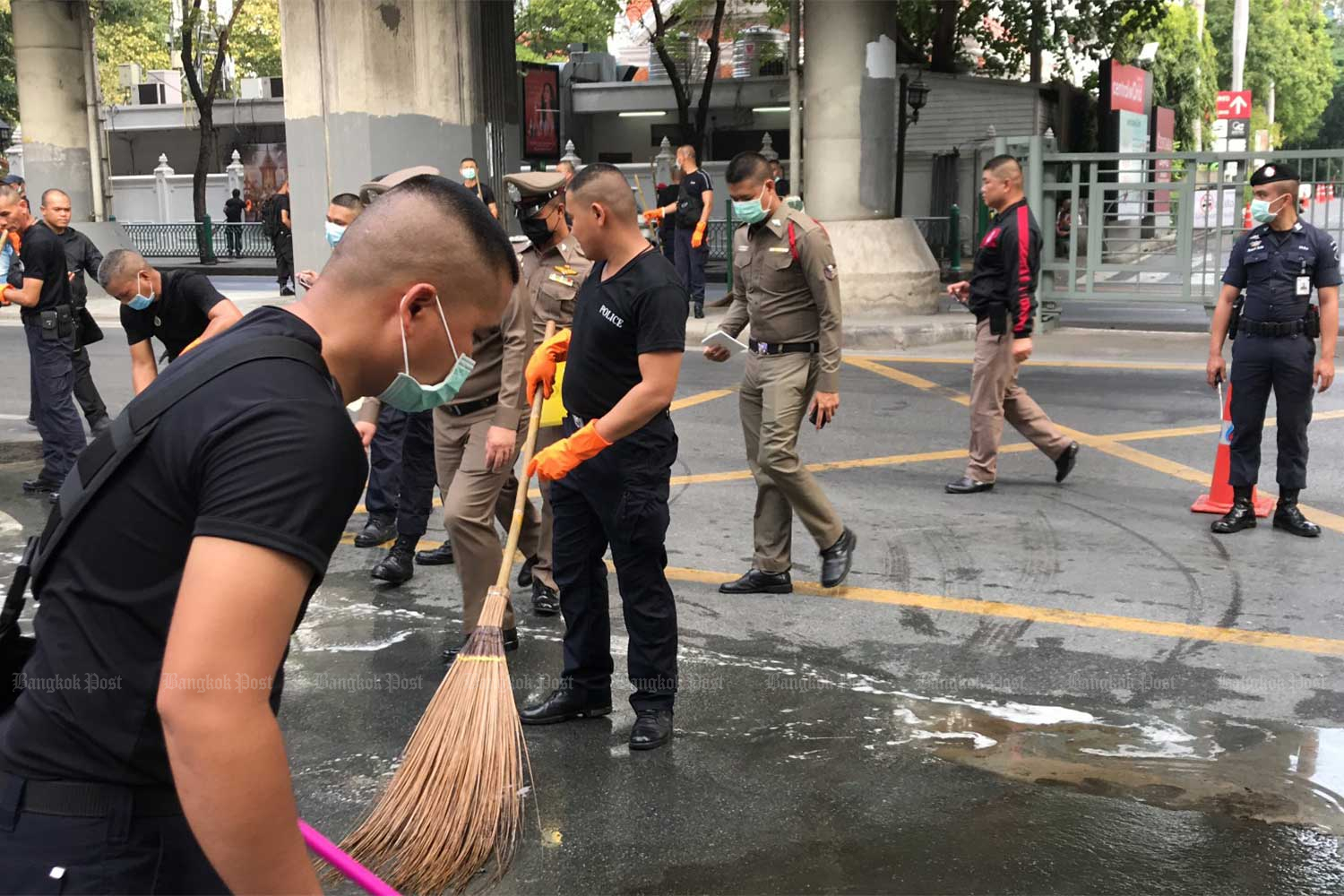 Police clean the street in front of the police headquarters on Saturday after removing spray paint. (Photo by Wassayos Ngamkham)