Veterinarians have been unable to save a protected great hornbill found with a severe gunshot wound on Koh Chang island in Trat province last week.

Niphon Pinyo, chief of Koh Chang national park, said on Nov 20 that a tourist had found the wounded hornbill at the first tier of Khiriphet waterfall on Koh Chang.

It was a female, about 5 years old and had been shot in the head.

Park staff rushed the bird to the animal hospital.

Two men suspected of involvement in the shooting had fled into the nearby forest, Thai media reported.

Vet Phadet Siridamrong said the hornbill’s condition deteriorated rapidly around 9.50pm on Thursday. It stopped breathing and was pronounced dead at 10.05pm, despite their best efforts to save it. 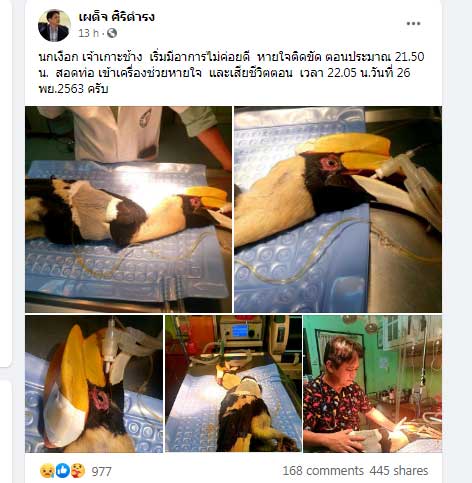 It's time for a rub-down