Intensive programme rolled out for schools

The Education Ministry is planning to launch an intensive English programme requiring all students in public schools to study English for five hours a week to improve national levels of proficiency. 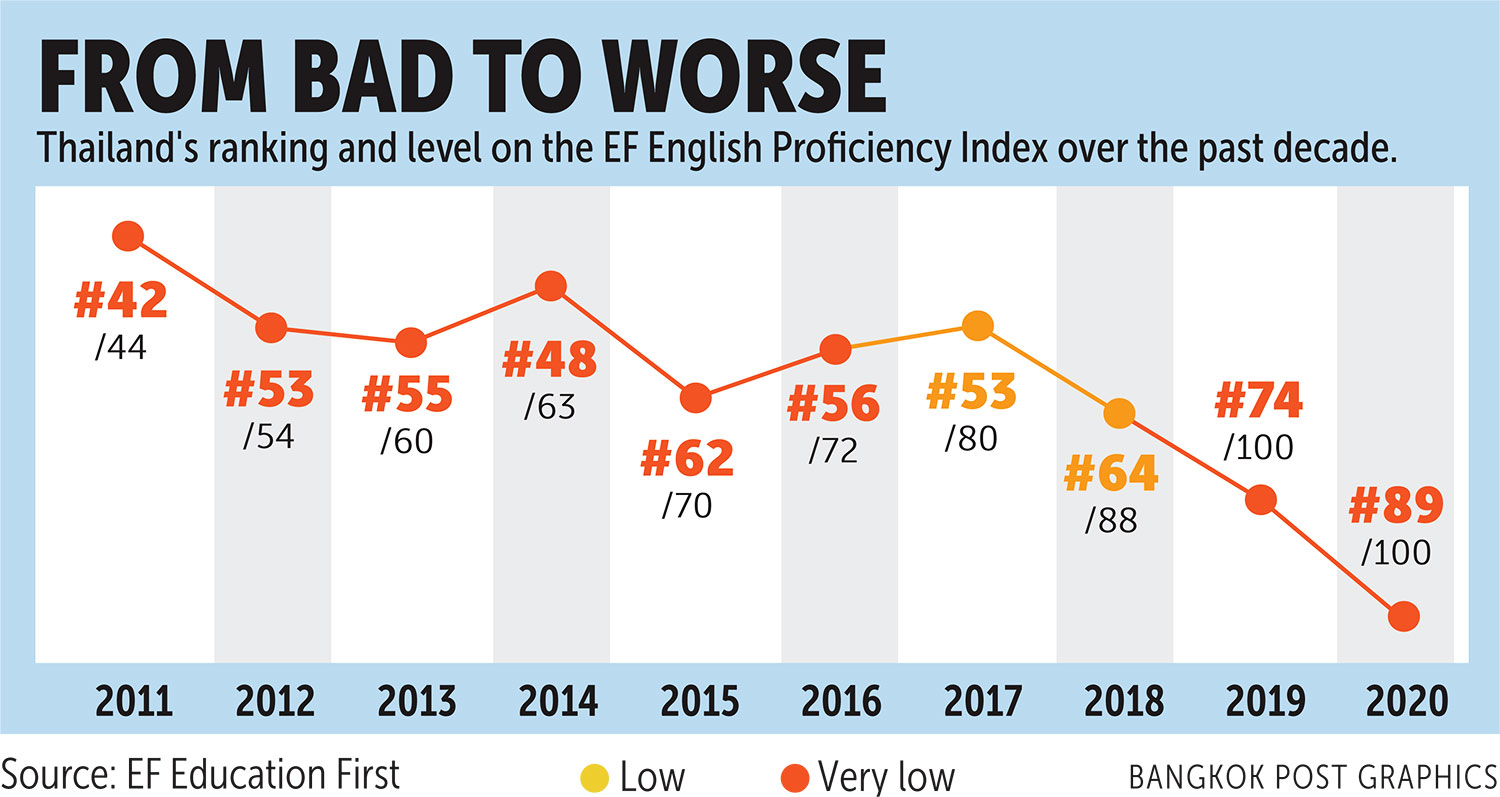 The ministry also plans to introduce bilingual programmes in about 2,000 schools nationwide to boost the English skills of Thai students outside Bangkok.

Education Minister Nataphol Teepsuwan said the programme will be implemented in district schools as soon as possible.

"Under this programme, we need to recruit about 10,000 native English-speaking teachers. The cabinet has earmarked funds for the recruitment, but we still have to wait until the Covid-19 situation improves," he said.

According to the recent English Proficiency Index conducted by the global education company EF Education First, Thailand dropped from 74 to 89 out of 100 countries this year.

Thailand's English language proficiency scored 419 out of 800 under the company's new point scale, which is considered "very low".

The kingdom is currently ranked 7th in Southeast Asia, behind Singapore, the Philippines, Malaysia, Vietnam, Indonesia and Cambodia, respectively, and ahead of Myanmar. It ranks 20th out of 24 countries in Asia.

Wunpen Bongkushstit, a retired associate professor of Thammasat University's Faculty of Liberal Arts, said she is not surprised by the results shown in the rankings as English learning in Thai schools usually focuses on teaching grammar, with the learning largely bookish and repetitive.

This kind of method leaves students unprepared when having to communicate in more practical situations, she added.

"We should focus more on communication rather than the outdated grammar-vocabulary memorisation system. We also need to boost students' confidence in using English and make learning languages more engaging and fun," she said.

However, Patpon Sabpaitoon, an English language tutor with over a decade of experience, said Thais were reluctant people to speak English as they feel likely to be judged for their accent. Meanwhile, teachers' teaching styles lack creativity.

Mr Patpon suggested that a safe environment be provided and that Thais, especially students, should be encouraged to speak more of the English language.

The top 5 in the world according to the English Proficiency Index 2020 are the Netherlands, Denmark, Finland, Sweden and Norway respectively.

EF Education First said it found from this year's study proficiency is improving globally with data also clearly linking the overall level of English spoken in a country with improvements in social and political equality.