Locals in Nan cover soil with hay before pouring water on it, a sufficiency economy tecnique. (Photo by Pattarapong Chatpattarasill)

The sufficiency economy philosophy conceived by His Majesty King Bhumibol Adulyadej The Great is one of his most famous and enduring legacies.

It offers guidelines for sustainable growth and is a tool to strengthen resilience in the face of internal and external challenges.

Shortly after he ascended the throne in 1946, the King initiated several royal projects to promote self-reliant and sustainable farming to ease the plight of the rural poor, but the concept of the sufficiency economy was mentioned for the first time in the King's speech to students during a graduation ceremony at Kasetsart University on July 18, 1974.

The term "sufficiency economy" was given further prominence when the King addressed an audience of well-wishers on Dec 4, 1997 -- on the eve of his 70th birthday -- in the wake of a major economic crisis hitting Thailand and many other countries in the region.

In his speech, King Bhumibol Adulyadej said it was not important for Thailand to become an economic tiger. What mattered was Thais should live a life that would give them enough to eat, so they were capable of supporting themselves financially.

He said progressive economists might consider his idea of promoting a self-sufficient economy obsolete as the country had already been involved in the trade economy.

But he contended it was production with the aim of making local communities self-sufficient that would help pull Thailand out of the crisis. People should produce enough for their own consumption first and then they could sell the rest, he said.

The King continued to stress the importance of the sufficiency economy concept on many other occasions and it has since gained currency and is regarded as an alternative development framework for the country.

Sumet Tantivejkul, secretary-general of the Chaipattana Foundation which promotes King Rama IX's principle of sustainable development, said the King's speech was a wake-up call to all involved to review their way of thinking on economic development and pursue a more balanced and sustainable approach.

He said the philosophy was a development approach based on moderation, reasonableness and prudence to create self-immunity.

"Sufficiency economy does not mean one has to economise or tighten one's belt all the time. You can indulge in luxury once in a while as long as you spend within your means. A person must have moderation and must not overspend," he said. 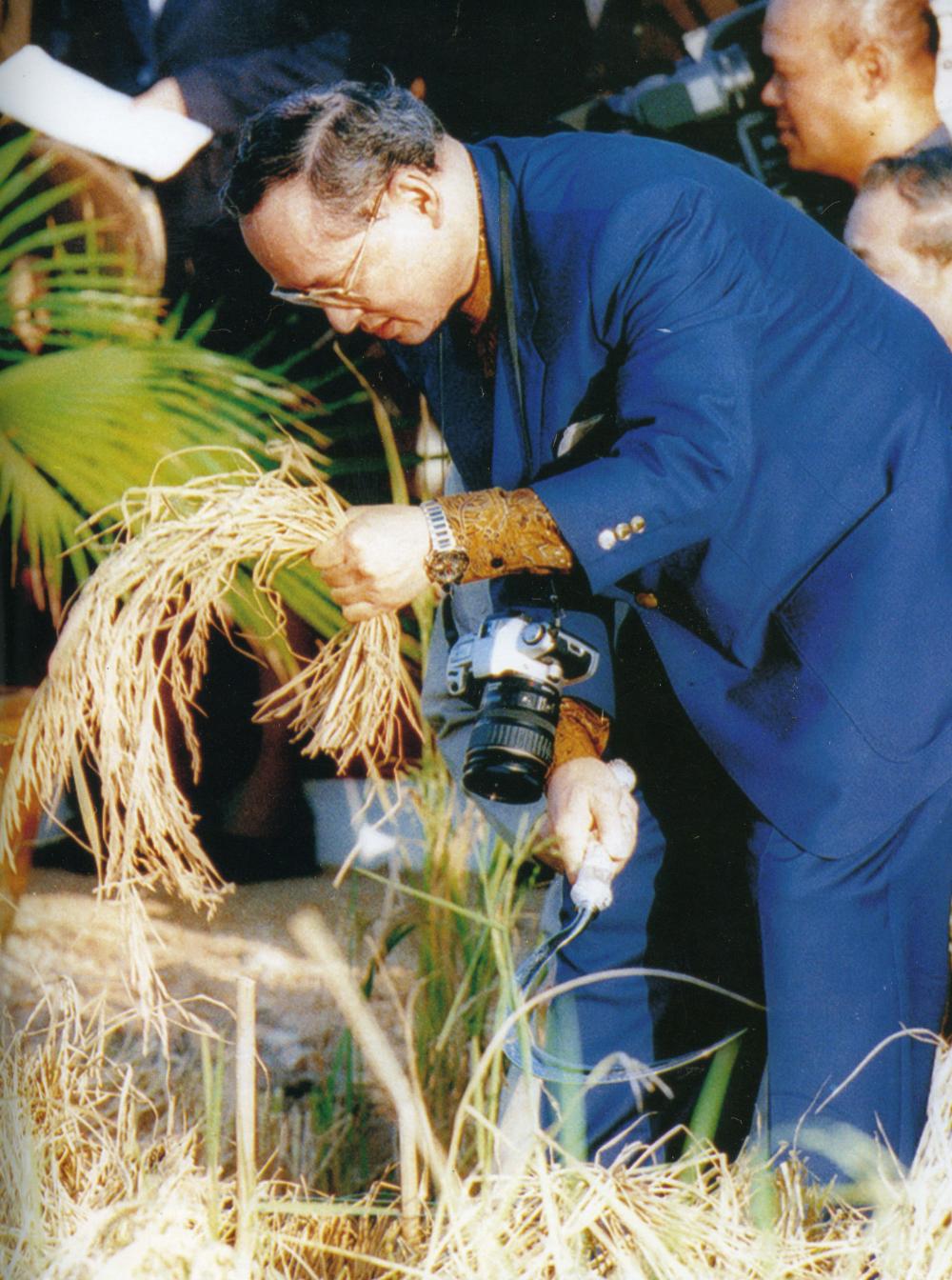 His Majesty King Bhumibol Adulyadej The Great harvests rice planted in a demonstration rice field in Prachin Buri in 2006. (Photo by Somchai Poomlard)

Mr Sumet added that Thailand was fundamentally an agricultural country so the country's economic progress depended mainly on agricultural development.

He said sufficiency economy was a "new theory" which offered guidelines for families and communities to be self-sufficient and self-reliant.

"The sufficiency economy philosophy also teaches us to be diligent and persevering. It helps us reach our full potential. It empowers us to cope with challenges and live happily," Mr Chartchai said.

However, he said it was unfortunate most Thais had not realised the importance of the philosophy partly because they were primarily concerned about struggling to make ends meet.

In light of this, a large-scale management strategy was needed to push for the philosophy to be fully implemented. The state sector alone could not perform the task due to bureaucratic red tape, he said.

Other actors in society must also step in and act as an intermediary to connect state agencies and local people to promote the concept, Mr Chartchai said.

It was also important to encourage and support those who succeed in gaining tangible results from practising the philosophy so they would be a model for others to follow, he added.

On May 26, 2006, then-UN secretary-general Kofi Annan presented the UN's first Human Development Lifetime Achievement Award to King Rama IX in recognition of his sufficiency economy philosophy and his tireless work to help the poor and vulnerable.

He said: "Your Majesty's sufficiency economy philosophy -- emphasising moderation, responsible consumption and resilience to external shocks -- is of great relevance to communities everywhere during these times of rapid globalisation."

The UN also declared 17 sustainable development goals to be achieved by 2030. It was agreed the development approach based on the philosophy was in conformity with those goals.