Traffic builds up on Mittraphap Road in Nakhon Ratchasima on Saturday morning as some people hit the road early to return to work in Bangkok on Monday. (Photo by Prasit Tangprasert)

Eighty people were killed and 709 injured in road accidents nationwide on Friday, bringing the total over the past four days of a road safety campaign to 267 deaths and 2,362 injuries.

A total of 713 accidents were reported on the first day of 2021, according to the Road Safety Directing Centre under the supervision of the Interior Ministry.

Authorities said they had stepped up measures to deal with a rise in traffic during the New Year holiday. More checkpoints were set up to check drivers for alcohol and also a fever in the wake of re-emerging Covid-19.

The road safety campaign was renamed to “New Normal, Drive Safely, No accidents” from “Seven Dangerous Days” used over the past several years to raise awareness of both drivers and passengers for road safety and coronavirus.

Drink driving continued to be the major cause of the accidents (43%) on Friday, followed by speeding (35.2%). 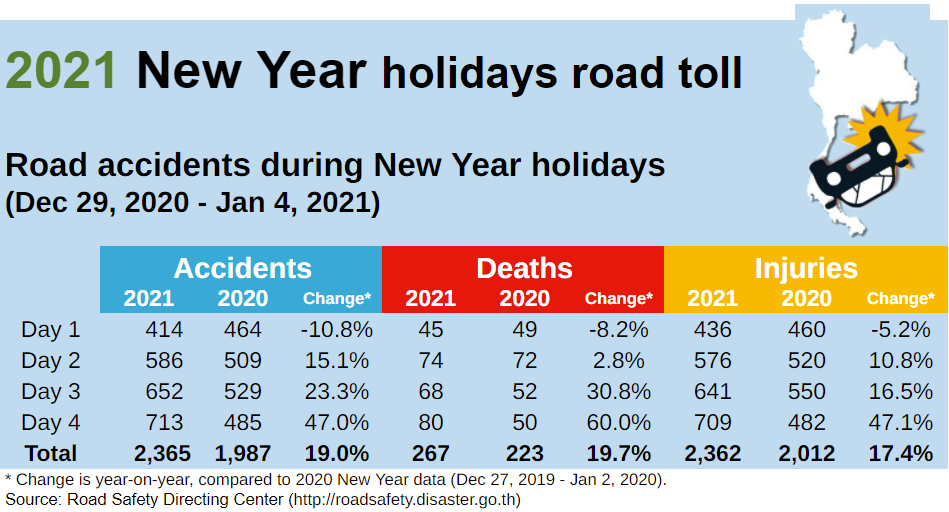 Like in previous days, the vehicle type most prone to accidents was motorcycles (81.7%).

The age group suffered from the most injuries and deaths was those aged 50 or more (21.7%)

The province reporting the most accidents and injuries on Friday was Songkhla (28 and 30 respectively) while Bangkok and Chiang Rai saw the most deaths (five each).

Over the past four days, 11 provinces reported no deaths from road accidents.