The State Railway of Thailand (SRT) conducts a test ride of the Red Line's Bang Sue-Rangsit section from Bang Sue Grand station to Rangsit station. The SRT said both facilities are scheduled to open to the public this year. (Photo by Chanat Katanyu)

Hopes are high that this year, Bangkok will see a reduction in traffic congestion and improvements in air quality, as several mass transit systems under construction for the past few years are scheduled to begin limited trial operations.

Four new electric rail routes will be added to Bangkok's growing rapid transit network this year after three lines were added to the list last year.

The first was the 13-kilometre elevated extension of the MRT Blue Line, which runs between Bang Sue and Tha Phra stations. The extension -- which began operating in March last year -- concluded the project, which was envisioned as a loop around Bangkok. 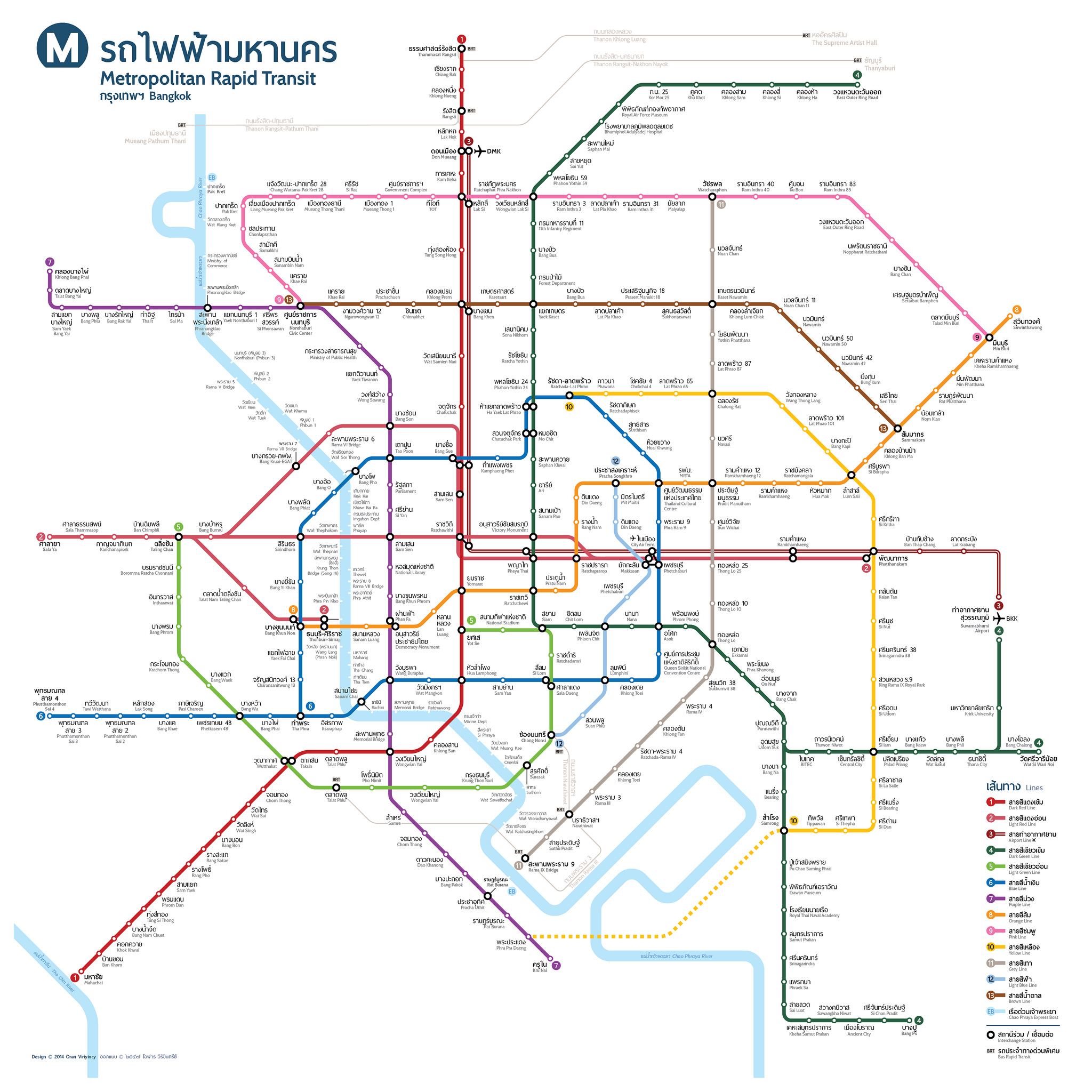 The opening of the 9.8-kilometre extension means the skytrain system now spans 68.25 kilometres with 59 stations from Samut Prakan at one end, to Pathum Thani at the other.

In the same month, Bangkok welcomed the Gold Line -- a 1.72-km monorail that links Krung Thon Buri station with Khlong San district office. The line allows passengers to interchange with the numerous boat services that run along the Chao Phraya River.

The Bangkok Post takes a closer look at the four electric rail routes which are due to come online later in the year.

Designed to accommodate commuter demands in northern Bangkok, the 34.5-km-long rail link between Nonthaburi and Min Buri -- also known as the Pink Line -- is scheduled to commence trial operations in July.

The monorail system, which will have 30 stations in total, will run between Khae Rai in Nonthaburi and Min Buri district in east Bangkok via Ram Inthra Road.

The trial operations were supposed to run almost the entire length of the system, from Min Buri to Nonthaburi Civic Centre station. However, due to technical limitations, the carriages will only run from Min Buri to Wat Phra Si Mahathat station, where passengers can interchange with the Green Line.

While the trial run will be limited, the Pink Line's opening will undoubtedly be welcomed by Bangkokians -- especially those who have had to endure the heavy congestion along Ram Inthra Road.

The monorail will use driverless carriages which will run at a maximum speed of 80km/h. Each rolling stock can accommodate about 1,000 passengers per trip, and full services are expected to begin in October 2022.

The completion of the Pink Line was delayed due to a number of issues, including access to construction areas and complex construction environments which forced the redesign of two stations.

In the same month, the Yellow Line will open for limited trial runs between Wat Sri Iam and Samrong stations.

The 30.4-km monorail system, with 23 stations in total, was envisioned as a minor transit system to shuttle commuters between Lat Phrao in Bangkok and Samrong in Samut Prakan.

While the construction of the Yellow Line is on schedule so far, there is one hurdle before the finish line -- the 2.6-km extension from Ratchada-Lat Phrao intersection to Ratchayothin intersection.

The extension is under scrutiny because some fear the proposed interchange will eat the revenue of the MRT Blue Line, as it would allow commuters to connect with the Green Line without having to go via the Blue Line.

According to a study by the Mass Rapid Transit Authority (MRTA), the number of Blue Line users will drop by about 6,000 people per day if the extension is in service. As such, many observers have said this may prove to be a sticking point.

"But we'll have no real figure [on revenue losses] until the Yellow Line extension opens. We'll talk about compensation later when it's time. And we can assure that a decision will be made with the public interest at heart," a source at MRTA was quoted as saying.

BSR Joint Venture won the bids to construct the Yellow and Pink lines under a public-private partnership (PPP) scheme in 2016.

Meanwhile, Bombardier Transportation Holding (Thailand) is contracted to supply 42 monorail carriages and their engines for the Pink Line and 30 carriages for the Yellow Line.

The other two rail links which are scheduled to open next year are the Bang Sue-Taling Chan and Bang Sue-Rangsit routes. Collectively, they are known as the State Railway of Thailand's (SRT) Red Line.

A trial run, in which the public will be allowed to travel along the line free of charge, is scheduled to begin in July this year, with commercial services to commence in November.

The commuter train system was first approved in 2007, but the first phase of its construction did not begin until 2013.

Construction on the Bang Sue-Taling Chan section was actually completed in 2012, but regular operations could not begin until the required signalling systems are installed.

Some 140 million baht was approved by the government to renovate infrastructure which had laid unused.

When completed, the Light Red line is expected to shuttle 35,000 passengers daily from Taling Chan in the west to Bang Sue station.

Meanwhile, the Bang Sue-Rangsit section, or the Light Red line, was designed to accommodate up a maximum of 300,000, although only about 86,000 commuters are expected to use the line when it opens.

Driving away the smoke