With earnings down 90%, some say Kanchanaburi governor's hotel closure order was overkill

The Bridge on the River Kwai won eight Oscars in 1958, but no awards for spelling. Built during World War II by the Japanese with prisoner labour, it crosses the Kwae Noi River in Muang district of Kanchanaburi. (Photo by Piyarat Chongcharoen)

At the River Kwai bridge in Muang district, usually a magnet for tourists, vendors are the only people visible, setting out stalls filled with souvenirs and other goods in hopes of attracting a local stroller or two.

Kanchanaburi governor Jirakiat Bhumisawasdi took many by surprise when he ordered the hotel closures, effective from Jan 14, as the province had recorded only five Covid infections to date. Two of those people have already recovered.

Hotels that currently have guests are being allowed to remain open until those guests check out, but new guests are not allowed. Mr Jirakiat took the action to reduce the risk of people from other high-risk provinces bringing the virus to Kanchanaburi.

Prior to the order, tourism in the province was already quieter than usual, as central government authorities have been urging people to avoid all interprovincial travel unless it is essential.

The abrupt decision has been a blow to small-scale operators of tourism-related businesses. Many are wondering how they can earn enough to feed their families and continue their businesses. 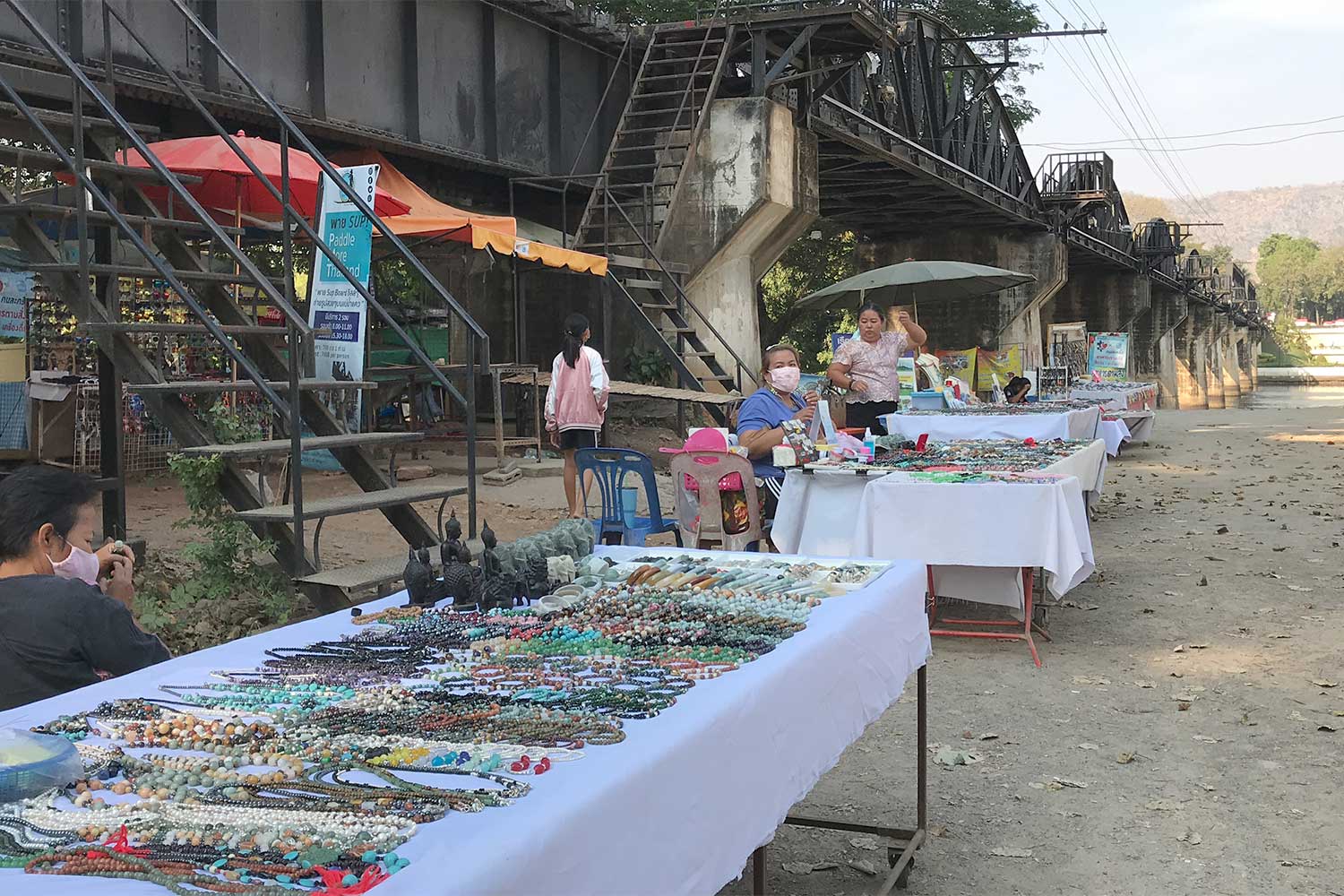 Vendors put their products on display near the River Kwai bridge as usual on Saturday in the hope that visitors might arrive. (Photo by Piyarat Chongcharoen)

Vendors in the area around the River Kwai bridge said that the first wave of Covid travel curbs last year had hit their businesses hard, with their income dropping by 90%. Now the second wave is inflicting more economic harm. Previously, they earned 200-300 baht a day. Now, their income is zero.

However, they continue to show up at their usual spots near the famous bridge in the hope that a few local visitors might come by.

Many of the vendors had received cash handouts from the government as part of an earlier package of Covid-19 remedy measures. Some used the cash to switch from selling souvenirs to selling the likes of grilled fishballs and iced coffee. However, the trade was not successful. Others tried collecting vegetables along the roads to sell at local markets, but they could not sell them, they complained.

Some vendors said they didn’t have or know how to use smartphones, so they could not get updates about government help or access the apps needed to obtain financial relief.

On his Facebook page, Mr Jirakiat said his decision to close the hotels and resorts was for virus prevention as well as an economic measure. The closure would not last more than one month, he wrote.

The governor said authorities and the private sector in the province were preparing to introduce a new form of tourism in the province to boost confidence among visitors and local residents in the wake of the new wave of the pandemic. The closure order was a necessary step back in order to move forward, he said. 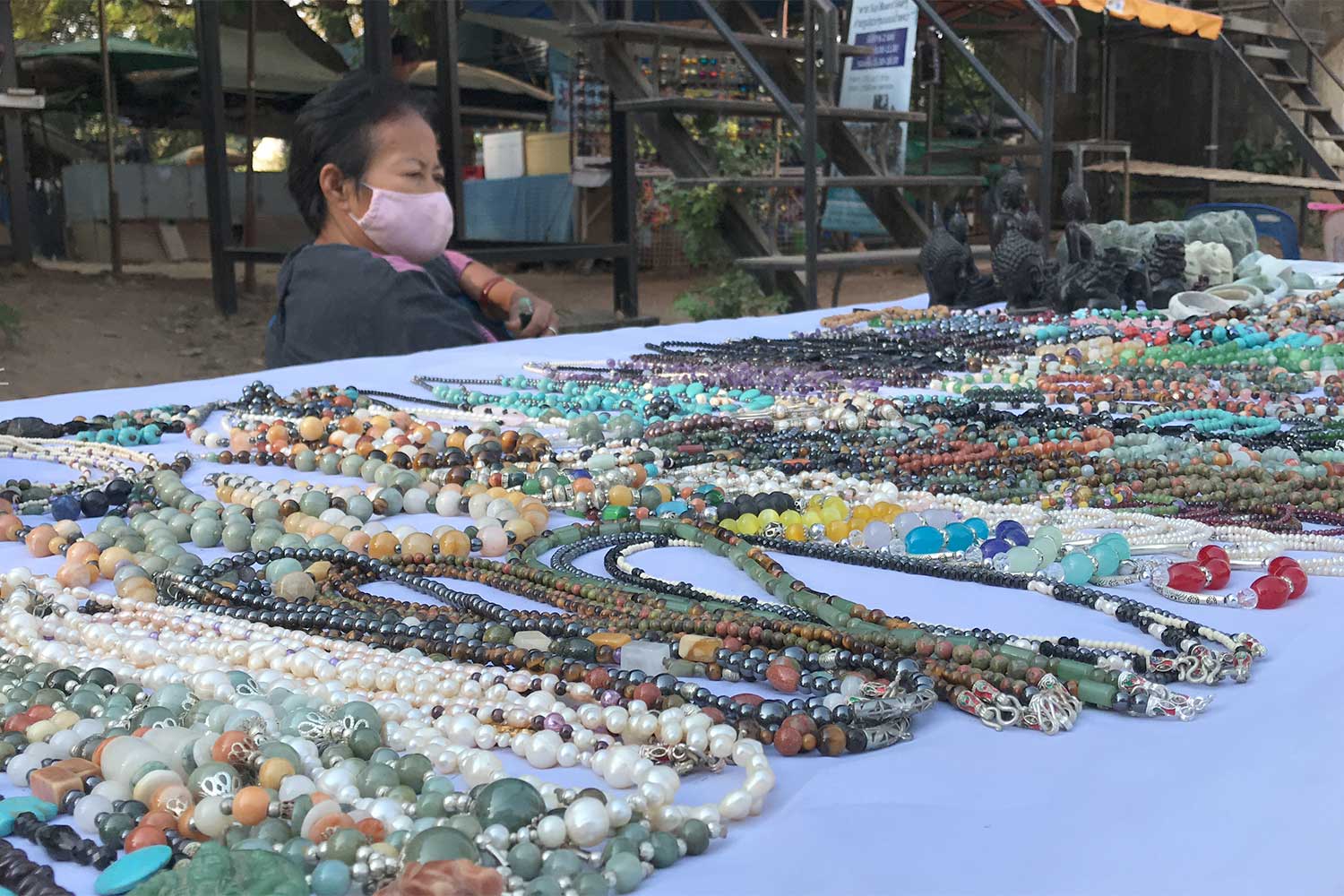 A vendor waits for customers to buy bead necklaces at her stall beneath the River Kwai bridge in Kanchanaburi province. (Photo by Piyarat Chongcharoen)