But netizens fume over 'no cash' rule

Vendors from Thanom Mitr wet market in Bangkok's Bang Khen district queue for Covid-19 tests provided by City Hall. Its public health service office has shut the market for three days, until Thursday, after a vendor there tested positive for the coronavirus. (Photo by Varuth Hirunyatheb)

The cabinet on Tuesday confirmed 210 billion baht of handouts to alleviate hardship caused by the recent Covid-19 outbreak.

Under a new financial aid scheme known as "Rao Chana", the government will provide a total of 7,000 baht per person over two months to cover 31 million people affected by the pandemic

Registration has been scheduled for Jan 29-Feb 12 on www.เราชนะ.com. Two of the criteria used to screen applicants are their annual income and how much they have in their bank accounts.

Those who are approved won't be paid cash, however -- the scheme uses a model similar to the co-payment subsidy programme known as "Khon La Khrueng", in which the money is transferred via the "Pao Tang" app and used to buy food, drinks and essential items.

During a Facebook Live session by Finance Minister Arkhom Termpittayapaisith to unveil the details of the scheme, netizens slammed how the financial aid was being distributed and said they preferred cash.

"Rao Chana" will, however, cover people's travel costs and the money can also be used to pay for public transport, including registered motorcyclist taxis, taxis and passenger vans.

Deputy Prime Minister Supattanapong Punmeechaow said on Tuesday the scheme would be funded by loans the government approved last year to help people affected by the pandemic, repair the financial system and restore economic security.

"Financial relief is not being given in a form of cash. The money will be disbursed in phases to stimulate steady spending on essential goods. We want to inject cash into small businesses like the co-payment scheme," he said.

Mr Supattanapong said recipients must meet the stated criteria of annual income and bank savings. Those with an annual income exceeding 300,000 baht and with savings of more than 500,000 baht as of Dec 31 last year will not qualify.

Others ineligible for financial aid are subscribers of the social security system, government officials and employees of state enterprises. 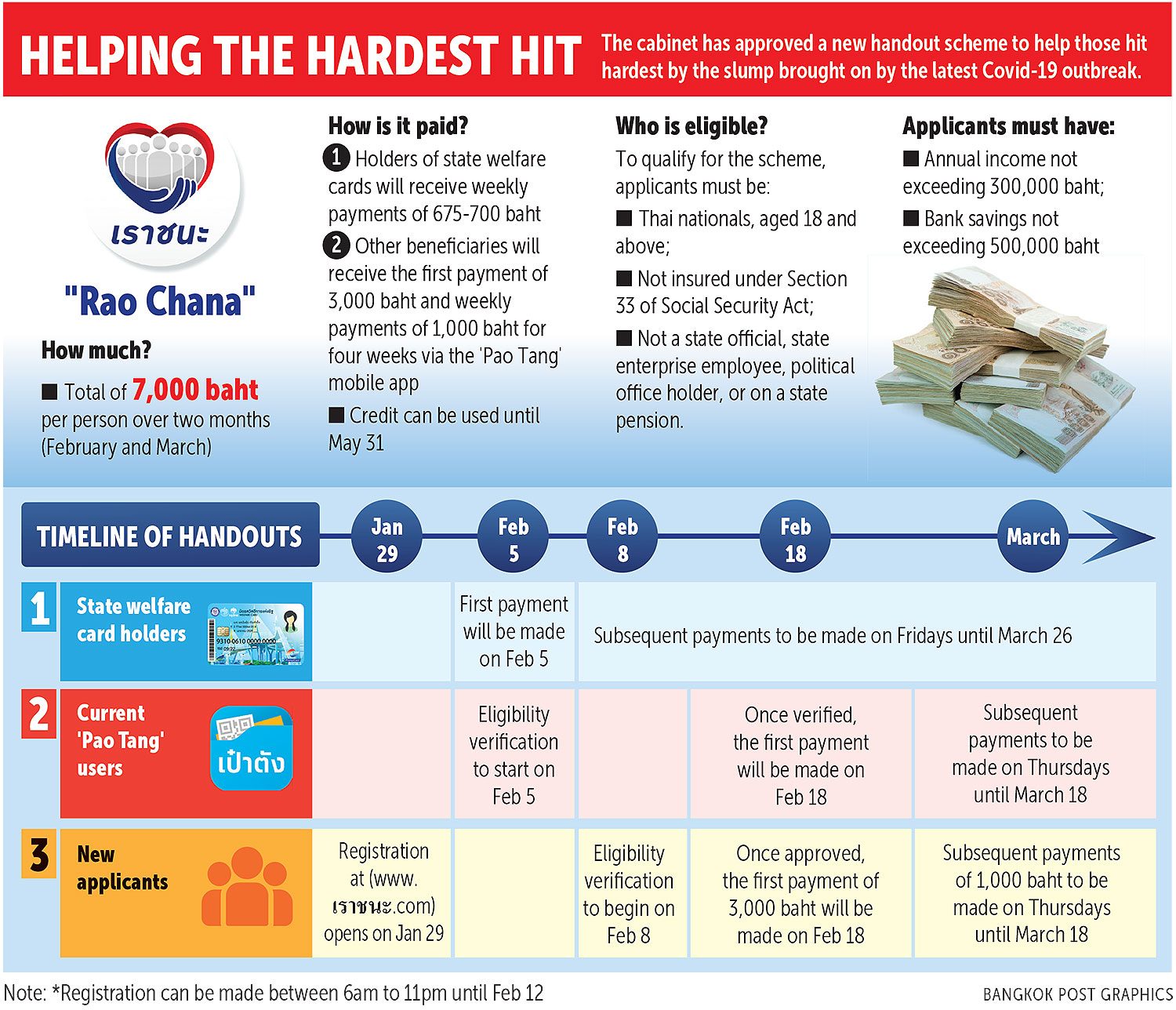 Mr Supattanapong said the Rao Chana scheme had no budget limit and people would be able to accumulate money as payments will be made over several weeks during February-March.

"The amount can be topped up each week if people don't use the money. And there is no requirement as to how much should be spent each day," he said.

He also allayed concerns that some low-income earners could not afford smartphones necessary to use the Pao Tang app, saying the government will see what it can do to help them buy cheap phones.

Mr Arkhom admitted during his Facebook Live session that the handouts would not compensate for the losses people have incurred during the outbreak but said they were designed to mitigate their hardship.

He said that the necessary funds would be drawn from the budget for coronavirus financial aid, which remains at 200 billion baht and that a further 10 billion baht would be transferred from the economic and social rehabilitation budget.

The finance minister pleaded for people's cooperation, saying it was vital in containing the outbreak and boosting consumption as the economy had not not been brought to a complete halt.

He said the cabinet had also approved another registration round for the second phase of the co-payment subsidy after 1.34 million claims were not exercised in round one.

The registration starts today and successful applicants will be able to start spending on Jan 25.

The two monthly payments of 3,500 baht are among a raft of measures designed to ease people's plight.

Electricity and household water bills will be cut in February and March.

Each household using up to 150 units of electricity a month will get the first 90 units for free and there will also be discounts for those using more than 150 units a month.

Water charges for households and small businesses will be cut by 10% for February and March.