The Department of National Parks, Wildlife and Plant Conservation has rejected a request to remove a tracking collar attached to a wild elephant, saying there is no evidence the device made the animal aggressive and caused it to attack and kill an 80-year-old man.

The department on Thursday rejected the call from an activist group which claimed the collar attached to the 35-year old male elephant, known as "Plai Due" or "Phi Due", put it in an irritable state.

The victim was sleeping in a tent in the park's Pha Kluay Mai camping area. After he was killed, the activist group demanded the collar to track the elephant's movements be removed. 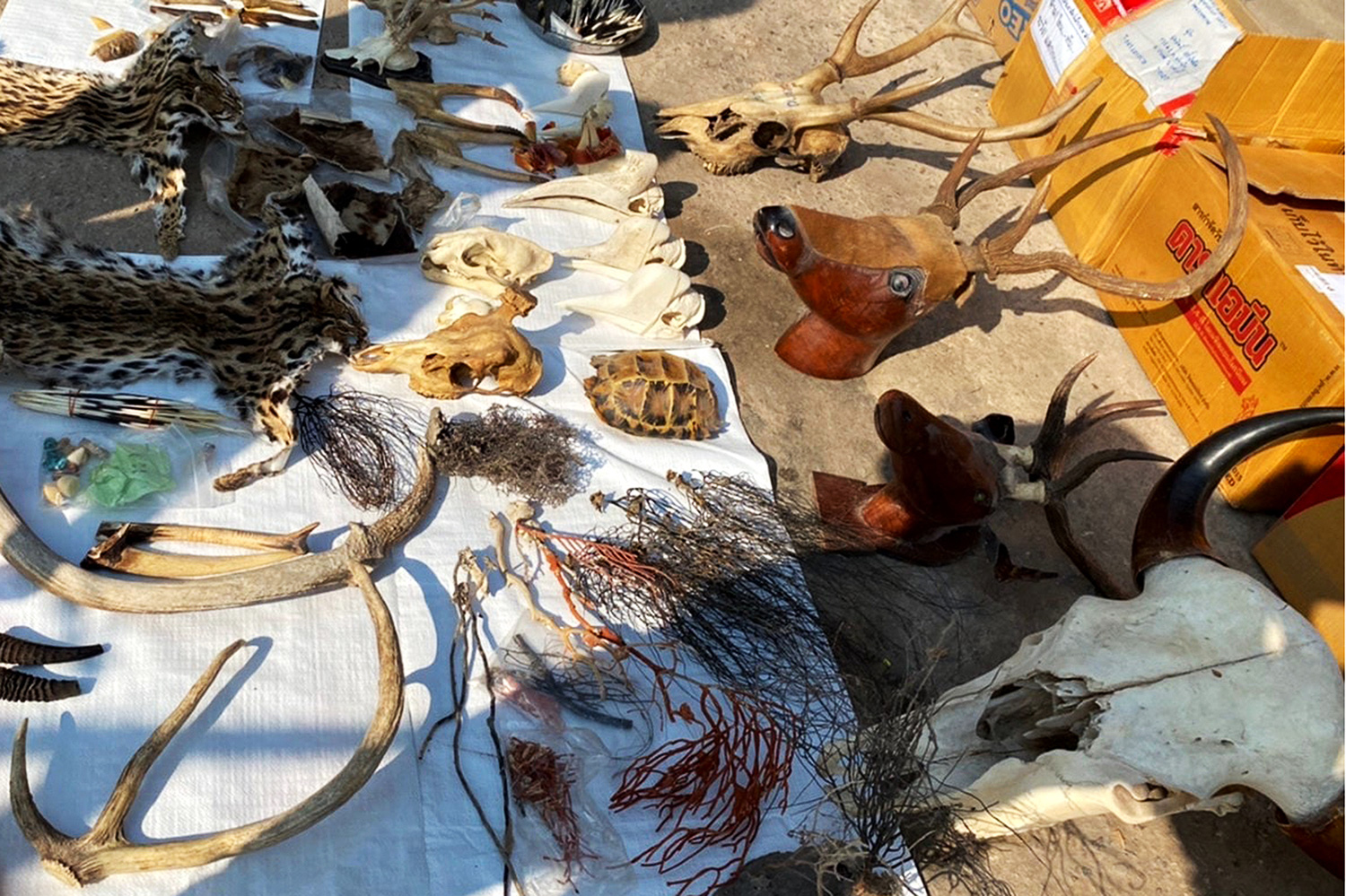 Antlers, tusks, pelts and other wildlife parts confiscated from the suspect. (Photos by DNP)

Department deputy chief Prakit Vongsrivattanakul said he saw no link between the collar and harmful behaviour.

He insisted the collar was useful for the department's wild elephant management plan to reduce conflicts between people and the animals.

He said experts had attached the collar to the elephant in line with international practices, especially animal health welfare models.

However, the department had set up a panel to find out the cause of the attack. As an urgent measure, it had also ordered the closure of Pha Kluay Mai and Lam Ta Khong to camping. 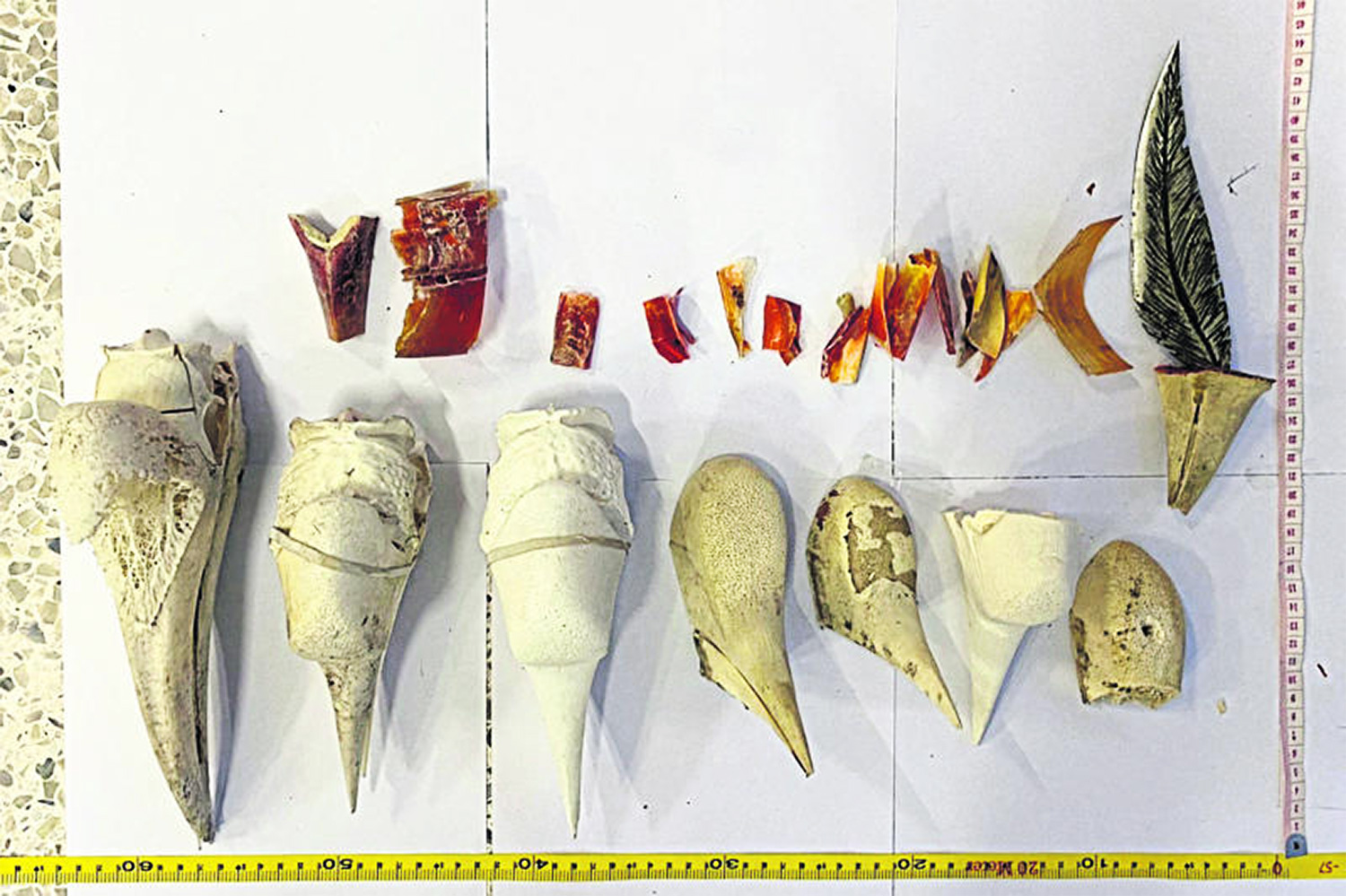 Beaks and skulls harvested from wild animals. Authorities say the goods combined could be worth more than 120,000 baht.

Any person who has paid for camping reservations could get a refund from the department.

"We are thinking of permanently closing Pha Kluay Mai because it is where wild elephants usually find food.

"It might be a good way to reduce confrontations between people and wild jumbos," he said.

There have been reports of many confrontations between people and the jumbos living there. Some of them, including Plai Due, were known to damage cars, injure people or destroy crops.

The 10km collar was attached to Plai Due to monitor its movements.

It was the first elephant in Khao Yai National Park to get one. The project, run by Kasetsart University, was approved last November and is expected to end next year.

Ronglarp Sukmasuang, who oversees the project, said Plai Due was selected for the collar experiment due to its aggressive behaviour against people.

He said the project will provide valuable information for the wild elephant management plan.

Meanwhile, one of the department's wildlife experts, Supagit Vinitponsawan, said the department began attaching collars to wild jumbos in 2018, with 11 elephants in five other protected areas, including seven elephants in Khao Ang Rue Nai Wildlife Sanctuary in Chachoengsao province.

Many conflicts between people and elephants have been reported at the sanctuary.

The expert said there is no evidence a collar has a detrimental effect on their behaviour, adding that elephants usually need just a few days to adjust to wearing the device.

The weight of the collar is less than 0.5% of the animal's total weight, in line with the international code, he said.

"There is no evidence that Plai Due is the killer [in the case of the 80-year-old man], he said.

"The only evidence found was the signal [from its collar] which showed it walked around the crime scene. It might be possible that another elephant killed the man because no one saw it happen."

He said the tracking collar project is useful for wildlife studies, adding it is worth the investment primarily due to its low management cost.

The department said it planned to collar another 67 elephants in 16 protected areas across the country.

Last year the number of deaths caused by elephants stood at 39, down on the 48 cases reported in 2019.