A worker operates a vehicle to spray disinfectant around Wat Ta Khien and the adjacent floating market in Bang Kruai district, Nonthaburi, on Wednesday. The cleaning was conducted ahead of Saturday's reopening of the temple and market, closed recently due to the new Covid-19 outbreak. (Photo by Pattarapong Chatpattarasill)

Dine-in restaurants will be allowed to remain open until 11pm and alcohol can be served in all provinces except Samut Sakhon, which remains a maximum and strict "dark red" control zone.

The adjusted measures were on Wednesday agreed upon by the Centre for Covid-19 Situation Administration (CCSA) subcommittee assigned to consider easing Covid-19 restrictions. The panel is chaired by National Security Council (NSC) secretary-general Natthapol Nakpanich.

These, along with other measures, will be proposed at a CCSA meeting chaired by Prime Minister Prayut Chan-o-cha for approval on Friday, CCSA spokesman Taweesilp Visanuyothin said.

Dr Taweesilp said authorities still plan to keep greater Bangkok zoned red for maximum Covid-19 control but restrictions on businesses and activities could be eased to varying degrees in other areas next month.

He said the CCSA subcommittee on easing business and activity restrictions decided that Bangkok and the adjacent provinces of Samut Prakan, Nonthaburi and Pathum Thani should remain maximum control zones because of their high numbers of new coronavirus cases.

Twenty provinces will be control zones -- 12 provinces in the Central Plains and the North, and eight eastern provinces, Dr Taweesilp said.

Seventeen provinces will have close surveillance zones -- six northern provinces, three northeastern provinces and eight provinces in the Central Plains and the South.

Thirty-five other provinces in the North, the Northeast and the South will be surveillance zones.

In Samut Sakhon, flea markets, restaurants, department stores and factories will be allowed to reopen.

Restaurants will be restricted to takeaways only and department stores must close at 9pm. Factories must impose preventive and virus tracing measures.

Despite its status as a dark red zone, Samut Sakhon reported no new cases in Ban Phaeo district, so Dr Taweesilp said the provincial administration would be allowed to decide whether to reopen businesses and allow activities in each district to resume. 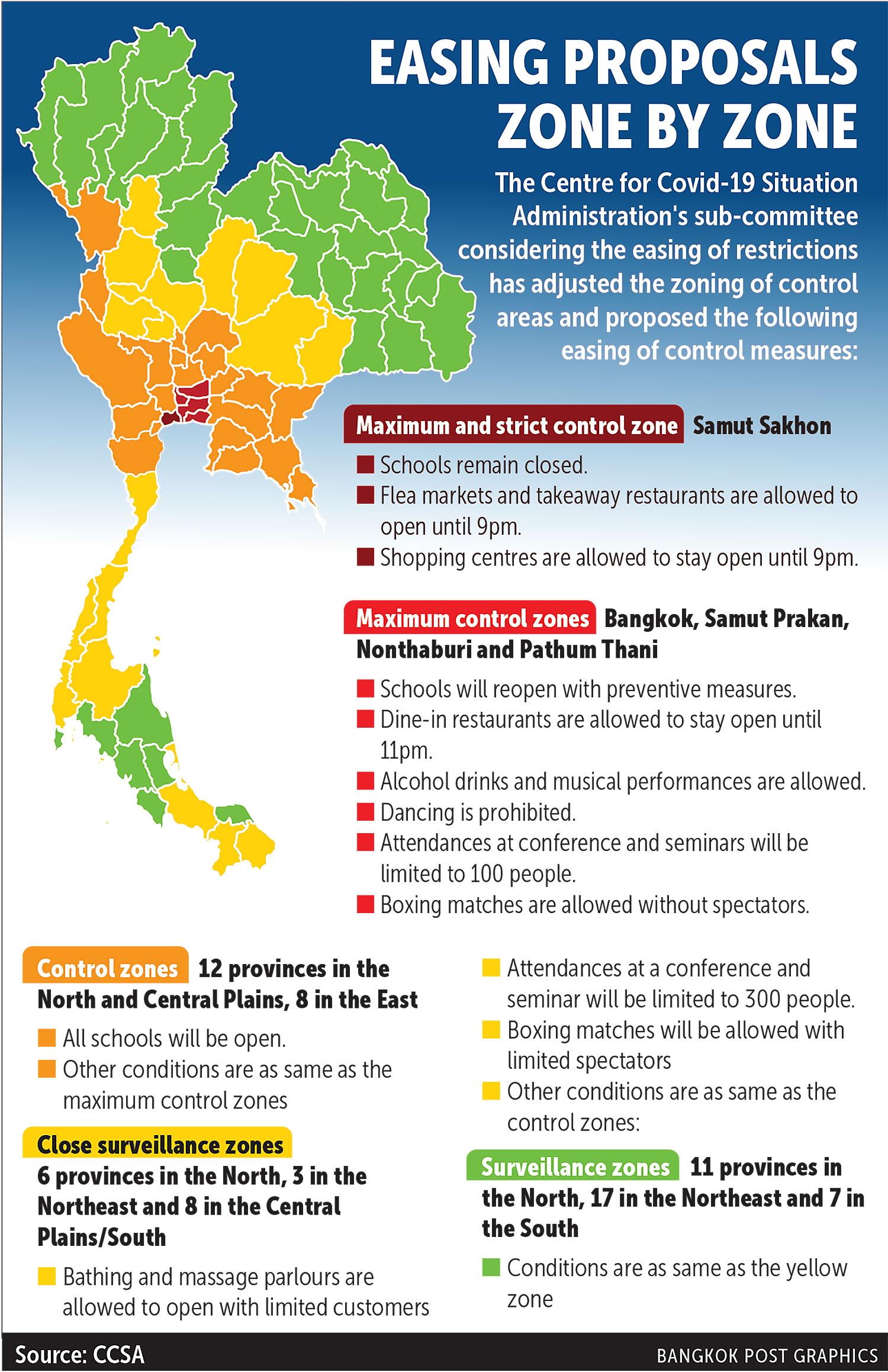 In a maximum control zone, pubs, bars and karaoke parlours must remain closed. Dine-in restaurants must position tables in compliance with social distancing rules and close before 11pm, while the sale of alcohol at restaurants will be allowed until 11pm. Musical performances will be allowed but dancing will be prohibited.

Meetings and seminars in both maximum control and control zones are allowed to have up to 100 people, but with no alcohol consumption or musical performances.

Attendances at meetings and seminars in surveillance and close surveillance zones must be under 300 people, with those same provisos.

Schools in all areas across the country except Samut Sakhon are allowed to reopen but with preventive measures in place such as alternate day school schedules, social distancing and online learning.

Bathing and soapy massage parlours in maximum control and control zones must remain closed, while those in close surveillance and surveillance zones will be allowed to reopen, but with limited customer numbers. Gambling continues to be banned nationwide.

Restrictions will be further eased in other provinces, Dr Taweesilp said.

Education Minister Nataphol Teepsuwan said most schools would be allowed to reopen from next week, including those in Bangkok, in response to localised declines in new coronavirus infections.

The ministry shut schools in 28 provinces at the start of January and would restart classes in all but one of those from Monday, said Mr Nataphol.

The move follows an easing of some curbs last week in Bangkok, including on some sports and leisure activities, but bars and night entertainment venues remain closed.

The announcement comes despite the country reporting on Wednesday its second-highest number of new daily coronavirus cases, with 819 infections.

The majority came as a result of mass testing in Samut Sakhon, the epicentre of the most recent outbreak.