The gates were firmly shut on Friday at the school in Thepha district of Songkhla where the director faces charges of raping a student and carrying a gun during morning assembly. (Photo: Assawin Pakkawan)

SONGKHLA: A school director facing an allegation of raping a girl student now also faces a firearms charge for allegedly pulling out a gun after apologising publicly during morning assembly.

Pol Col Thammarat Phetnongchum, the Thepha police chief, said on Friday that  investigators were now handling two cases against the accused school director - the alleged rape of a girl student, and carrying a firearm in public.

The mother of the Mathayom Suksa 3 student filed a complaint with police, acccusing  Mr Sayan of rape and depriving a child of parental protection.

The mother had provided some evidence to back her charges, he said. Her daughter had been referred to Thepha Hospital for a medical examination, and psychologists and child welfare officials would be present when she was questioned by police.

If the evidence justified it, the director would be summonsed to hear the charges, Pol Col Thammarat said.

Meanwhile, officers would question witnesses to the gun incident.

He said the gun was registered, but Mr Sayan was at fault for carrying it in public.

Investigators would prepare their case, then he would be called in to hear the additional firearms charge, Pol Col Thammarat said. (continues below) 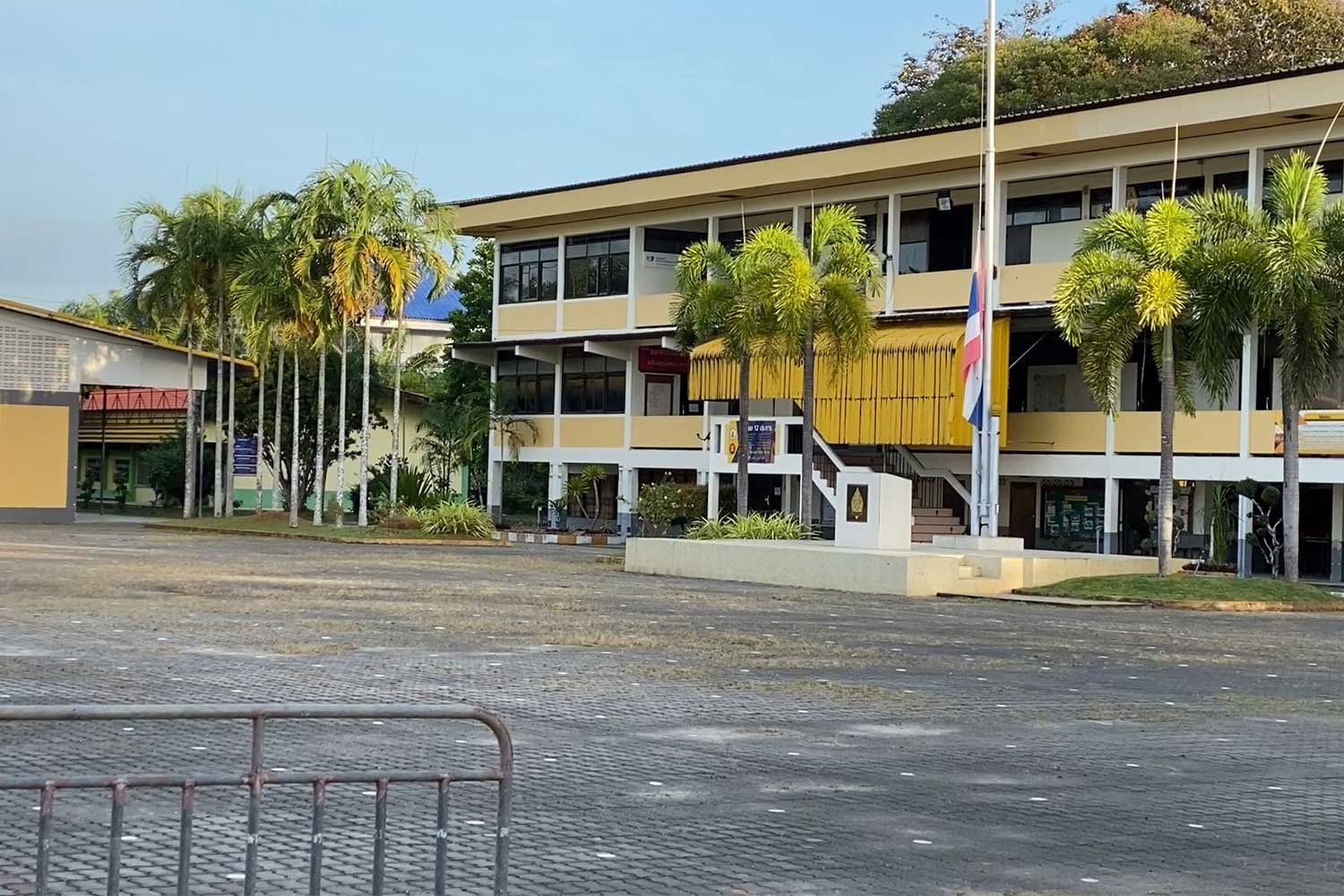 The school diretor is accused of producing a pistol during morning assembly in front of the  flag, causing panic among students and teachers. (Photo:Assawin Pakkawan)

On Thursday, in front of hundreds of students and their teachers, Mr Sayan suddenly flashed a gun after addressing the assembly during morning flag raising.

He had first talked about school management and then changed topic, apologising to everyone for  his "personal problem".

He said, “I have already made my apology to them, and will make this louder than they did.’’ He did not mention names or details.

According to reports, he then unbuttoned his suit jacket and pulled a pistol from his waist, sending students and teachers into shock and panic. As the students fled, some teachers intervened to prevent Mr Sayan from his seeming intention of committing suicide.

Classes were then suspended for the rest of the week and parents called to take their children home. The school gates were closed and outsiders refused entry.

Media reported that Mr Sayan went to Thepha police station by van after the incident and handed the pistol over to police.

Officers found the gun was registered, but asked him to supply documents to confirm  ownership. He then left the police station.

Banchop Phisutthipan, deputy school director, said media reports Mr Sayan had pulled out his gun were incorrect. Mr Sayan only unbuttoned his jacket, and that revealed the gun.

Media reported that investigators questioned the student's father on Friday, and that the mother had handed police copies of chat messages between the director and her daughter.

Officials from the Songkhla Dhamrongtham centre and other agencies also visited the student’s home to offer help. 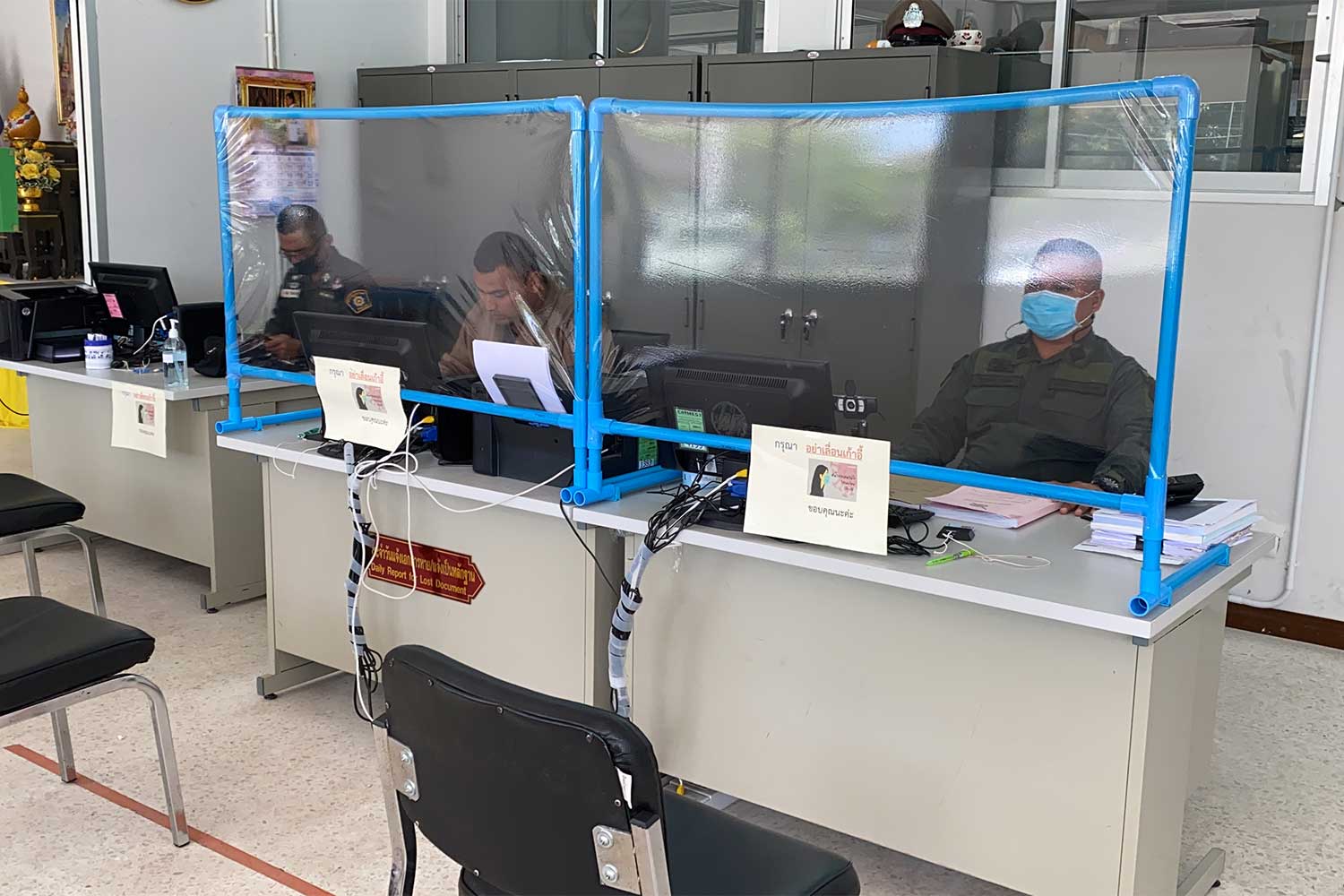 Police at Thepha station are now investigating two cases against the school director -the alleged rape of student and carrying a firearm in public. (Photo: Assawin Pakkawan)