A woman in Chai Nat shows the marriage certificate she brought to a house where her policeman husband was marrying another woman. (Image captured from video clip)

The wedding of a policeman in Chai Nat ended in embarrassment after his wife, dressed in black, crashed the party and produced her marriage certificate to prove the groom was not single.

Worse still, the groom’s mother, who accompanied her daughter-in-law, gave her son a shove and slapped his face while he and his bride were receiving the monks’ blessings. The monks were left stunned but continued with the ceremony.

The would-be bigamist has been the object of heavy criticism — his police superiors are also not pleased — since video of the incident went viral on Facebook on Thursday.

The 33-year-old wife told Thai media on Friday that she went to the wedding at a house in Muang district of Chai Nat on Thursday morning after learning that her 34-year-old husband, was wedding another woman. A police officer at the Muang police station, he had lived with his wife for over 15 years they had two daughters, aged 15 and 5.

She said she was aware that her husband had been romantically involved with the other woman for about one year. A few days earlier, friends told her that the mistress had announced plans to tie the knot.

“I initially did not think that my husband would wed,” she told reporters. “Before the wedding, he was still staying at home with me and told me he would be going out to work a night shift at his station.

“I then said to him, ‘Think twice if you want to get married again.’ He replied, “It’s nothing. Who’s getting married? I’m going out for the night shift.’

“The next morning, I went to the woman’s house to see whether there would be a wedding party or not. When I arrived, I was shocked and sad. I never thought he would get married.”

The woman posted video of the events on her Facebook page hours later. At one point, the groom is heard telling his real wife: “Leave the party. You are not a guest of this house. Please leave.”

Despite the presence of his wife, the groom and his new bride acted as if nothing had happened. They still went ahead with the ceremony.

But a second video showed the groom’s angry mother showing her son in no uncertain terms what she thought of his decision.

Thai media also reported that the groom was facing an investigation by his police superiors over the wedding as he and his wife had not divorced. 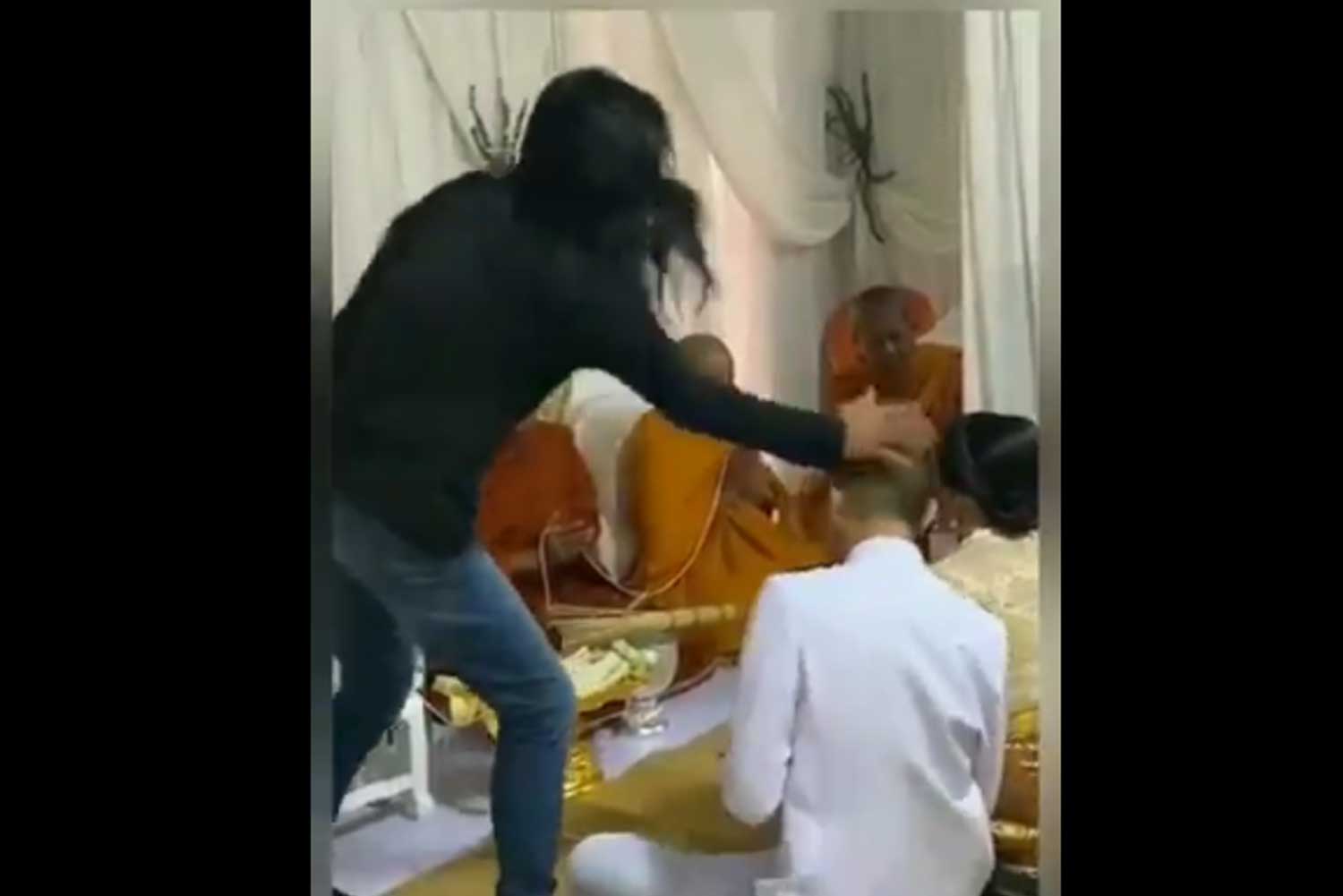 An image from a video shows the groom’s mother cuffing her son on the head before slapping his face in front of monks at the wedding ceremony.