The first 317,000 doses of Covid-19 vaccines from Sinovac and AstraZeneca will arrive in Thailand on Wednesday, with 200,000 of them to be distributed to the 13 provinces considered to be the highest-risk zones.

The doses arriving in Thailand are from two manufacturers -- 117,000 from British-Swedish multinational AstraZeneca and an unspecified number from Chinese firm Sinovac.

Prime Minister Prayut Chan-o-cha's Facebook page said the first 200,000 doses from Sinovac will be given to priority groups within three days. 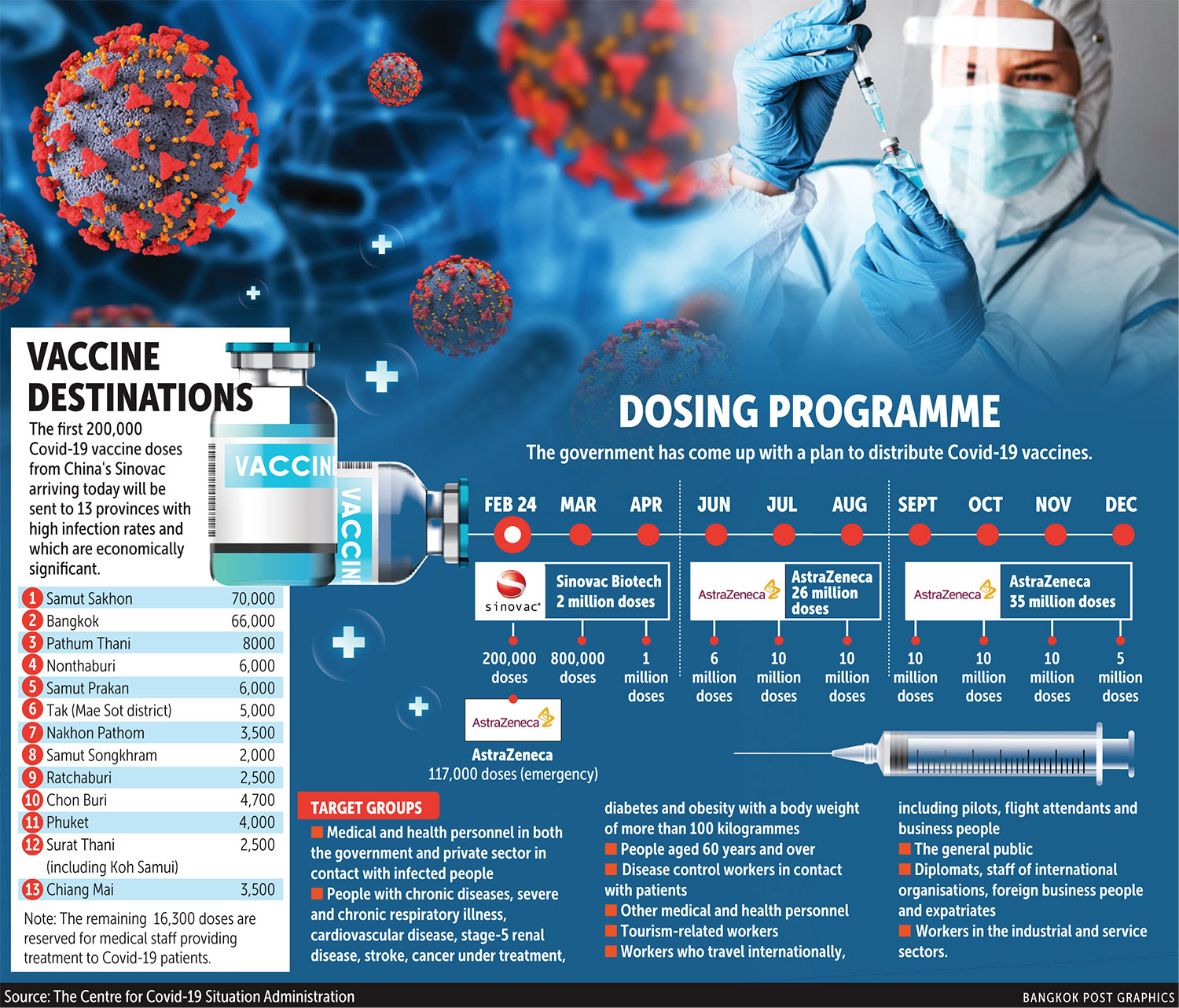 Deputy Prime Minister and Public Health Minister Anutin Charnvirakul said the process could have been even faster. "Had there not been any drama, the vaccines would have arrived sooner," he said.

He did not explain precisely what he meant but Progressive Movement founder Thanathorn Juangroongruangkit had earlier criticised the government's vaccine plan. The opposition Move Forward Party also brought up the issue during the no-confidence debate last week.

Wednesday's shipment of the AstraZeneca vaccine has come as a surprise since there had been no mention before of that version being imported.

It transpires that the director of the National Vaccine Institute procured the AstraZeneca vaccine.

The first Covid-19 jab to be administered in Thailand will be given to the PM and it will be the AstraZeneca version, Mr Anutin declared.

"It's important that Gen Prayut takes the first Covid-19 vaccine shot because he is the country's leader. There will naturally be a risk assessment process by the Department of Disease Control, which is an internationally accepted standard procedure," said Mr Anutin, who is also a deputy prime minister.

"Gen Prayut will receive the vaccine that has no age restrictions -- AstraZeneca."

A Government House source said Gen Prayut was scheduled to be vaccinated at Bamrasnaradura Infectious Disease Institute on Saturday.

Mr Anutin apparently wanted to clear up any confusion caused on Monday, when Gen Prayut declared he would take the first shot to boost public confidence in the vaccine.

A doctor later warned the first batch of vaccines to arrive in Thailand Wednesday, the Chinese-made Sinovac, had been tested only on 18-59-year-olds and its efficacy and side effects were not known in other age groups.

Since Gen Prayut is 67, that vaccine would seem to be unsuitable for him. He will be able to perform his duties normally after having his shot.

The intervals between first and second jabs are 14-28 days for Sinovac and six weeks for AstraZeneca.

The vaccination will initially take place at medical facilities, where people will have to wait 30 minutes after taking the shots so they can be monitored for any side effects.

The first lot of vaccines to arrive were originally due to be 200,000 doses of Sinovac Wednesday, followed by 800,000 doses in March and 1 million more in April.

The rest of the vaccines for Thais in 2021 will be AstraZeneca's, made locally by Siam Bioscience, with 26 million doses to be available from May to June and another 35 million doses afterwards, according to Gen Prayut's Facebook page.

Speaking after Tuesday's cabinet meeting, the PM pointed out that the Covid-19 vaccines belonged to Thais nationwide, not the prime minister.

The vaccines that will arrive Wednesday will be registered by the Food and Drug Administration (FDA) first, he pointed out.

"Vaccines will play a part in helping the tourism industry and business operations to recover," he said. "Those who receive vaccines and have certificates may also be allowed to enter the country without quarantine, though they will have to be tracked just in case of any problems."