Thai Airways International (THAI) says it plans to raise about 50 billion baht over the next two years as the financially struggling flag carrier submitted its business rehabilitation plan on Tuesday.

Chai Eamsiri, acting executive vice president of THAI's Finance and Accounting Department, said an initial amount of 30 billion baht must be raised by June this year to pay for operational costs and compensation for employees who have resigned.

The funds may be sought by borrowing from financial institutions, seeking investment allies or through a debt-to-equity conversion, he said.

In negotiations with creditors over the rehabilitation plan, the company has not asked for haircuts or debt reductions out of fear that creditors may not approve the plan. Instead, THAI has asked for a three-year debt moratorium after which the debt will be repaid, Mr Chai said.

Chansin Treenuchagron, the airline's acting president, said that the company submitted its rehabilitation plan to the Legal Execution Department, with debt amounting to about 410 billion baht and 13,000 creditors in total. THAI's creditors will meet on May 12 to vote on the rehabilitation plan and if the majority of creditors vote in favour, the plan will be forwarded to the Central Bankruptcy Court for consideration, Mr Chansin said.

The court is expected to decide whether to endorse the plan between June and July, he said before adding that if the plan is endorsed, the company will conduct its business according to the plan.

This year, between 6,000 and 7,000 employees are also expected to take part in the company's mutual separation plans, which would lead its workforce to be reduced to about 14,000 to 15,000 by the end of this year which would suit the company's future business plans, Mr Chansin said. 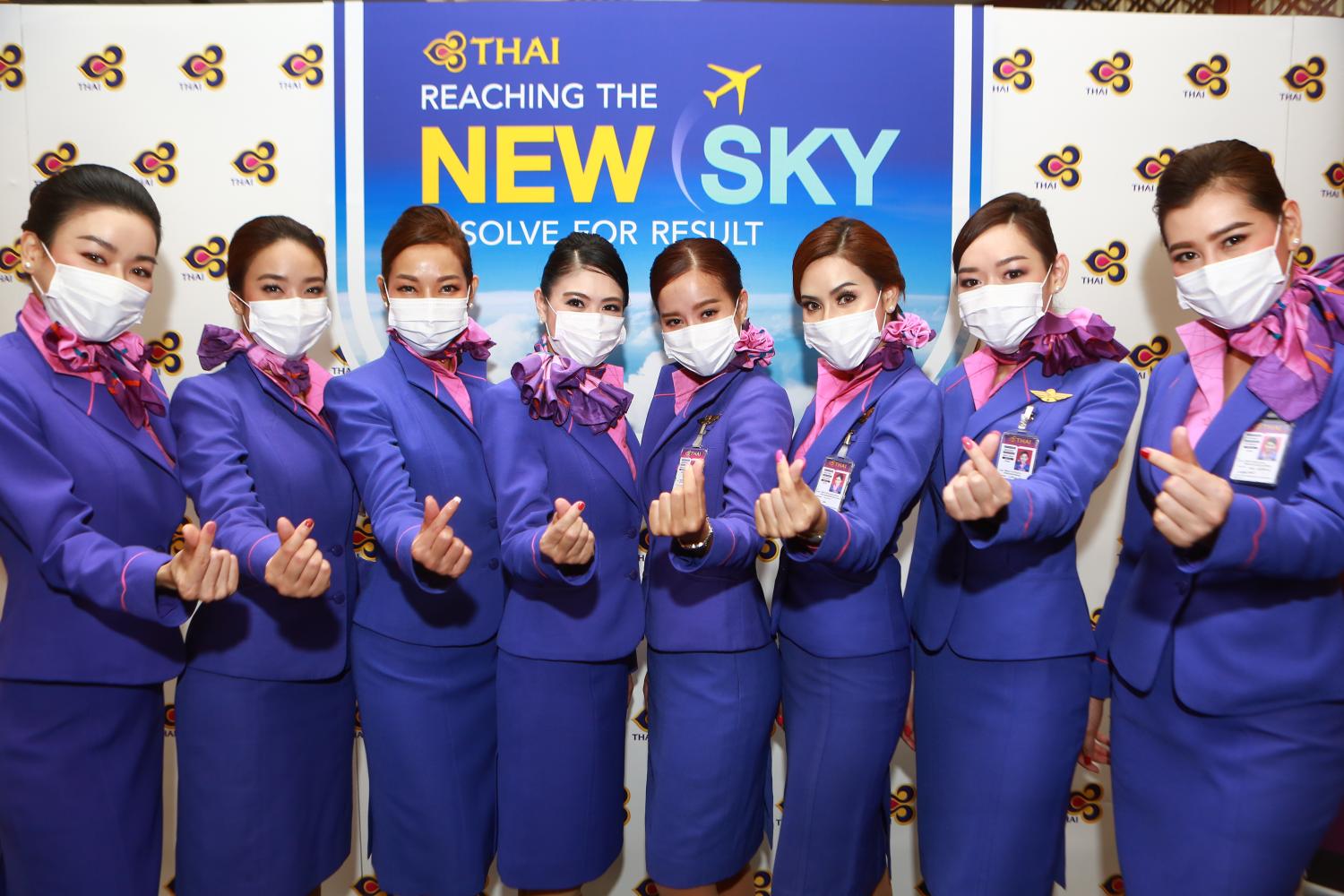 below THAI staff give a mini-heart hand gesture as the financially troubled airline holds a press conference on its business rehabilitation plan at its head office on Vibhavadi-Rangsit Road yesterday.  (Photos by Somchai Poomlard)

In light of this, the rehabilitation planners have negotiated with creditors who are aircraft leasing companies for leasing fees that are flexible according to real-time use. This would enable THAI to reduce costs efficiently, Mr Chansin said.

He also revealed a set of four strategies to strengthen the airline's business operations and boost its income under the theme "Private High Quality Full Service Carrier with Strong Thai Brand, Connecting Thailand to the World and Generating Consistently Healthy Profit Margin".

The first strategy is to make the airline become customers' first choice by presenting its products and services that cater to customers' needs.

The second is to increase the company's commercial potential by strengthening its commercial aspects and gaining more income with returns and profits from additional and alternative services. A focus will be placed on omni-channel commerce both online and offline, with digital investment, Mr Chansin said.

The third strategy involves efficient cost management to ensure the airline's competitiveness in the aviation industry and the fourth strategy is to make the company an organisation that is most efficient in operations and safety and a centre connecting a network of airlines which are its allies that fly to Thailand.

The company has also appointed the chief of its transformation office to carry out the plans, Mr Chansin said.