Visitors are scarce on Khao San Road in Bangkok, once packed with tourists before the Covid-19 pandemic. The government says it will allow the annual Songkran festival to be celebrated next month to stimulate tourism and the economy, but with strict disease control measures in place. (Photo by Pornprom Satrabhaya)

The annual Songkran festival will be allowed to go ahead next month to stimulate tourism and the economy, but celebrations must comply with disease control measures, triggering some health concerns from a senior physician.

Prime Minister Prayut Chan-o-cha on Wednesday signalled further easing of travel restrictions to stimulate the economy, saying the Songkran festival could be celebrated fully, but only if social distancing rules are respected.

He gave an interview at Government House on the government's relaxation of Covid-19 measures for Songkran.

He said he expected it was likely travel curbs would be further eased, which could further boost spirits at festival time.

"The government is in the process of considering what can be allowed, whether to permit some activities or all of them. But if the virus spreads [because of it], the government might be blamed for it," Gen Prayut said.

"So I call for your understanding. Easing restrictions is not an easy call to make since the government has to take responsibility for the whole country." 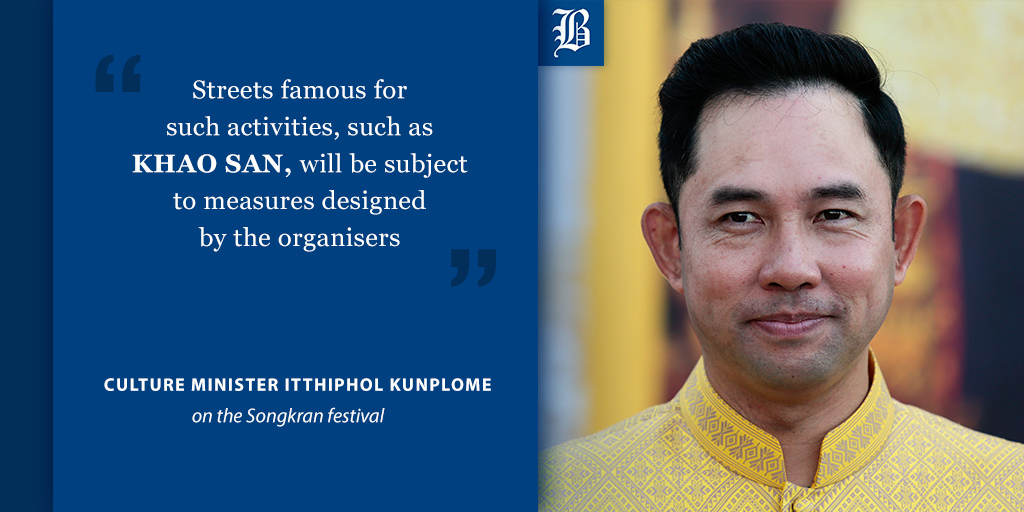 "Chief among the measures are social distancing and capacity limits," he said.

Organisers of Songkran celebrations, particularly those at famous venues such as Khao San Road, were allowed to decide for themselves whether to organise any activities this year, he said.

Sanga Ruangwattanakul, president of the Khao San Business Association and CEO of Buddy Group, said permission for Khao San Road to host the Songkran festival offers hope to entrepreneurs in the area who have been struggling to shore up their cash flow due to the lack of tourists.

"We know that it won't help much as there are still no international tourists, but at least it is a good starting point to reignite business activities on Khao San Road," he said.

Mr Sanga said the economy on Khao San Road has been stagnant since the pandemic hit Thailand last year because 80% of business activities on the famous street rely on foreign tourists.

"At the moment, we can only count on the support of local tourists to survive," he said.

"For some businesses such as massage shops and souvenir shops, there are no customers at all.

"For pubs and bars, there are just a few customers per night. Out of 500 entrepreneurs on the road, only 50 are still operating."

However, Thiravat Hemachudha, director of the Health Science Centre of Emerging Diseases at Chulalongkorn University, on Wednesday expressed his concerns about the government's plan to relax activities during the water festival, raising a question as to whether the decision is made based on correct information.

He said the Centre for Covid-19 Situation Administration (CCSA) has reported a decline in the number of new infections per day, now down to two digits.

But it failed to show 100 infections which had turned up at one plant in Samut Sakhon province.

Businesses on Khao San Road are looking for more help from the state after City Hall gave the area a facelift intended to attract local visitors. (Video by Jetjaras Na Ranong)

Meanwhile, Dr Taweesilp Visanuyothin, the CCSA's spokesman, said the policy of easing restrictions during the festival was still being fleshed out and further details must be discussed by the centre. The public would be brought up to speed when more was known.

Secretary-General of the National Security Council, Gen Natthapon Nakpanich, on Wednesday spoke of progress in using vaccine passports in Thailand, saying the Public Health Ministry was considering the initiative.

Asked if Songkran celebrations would be allowed if nothing unexpected happened, Gen Natthapon answered yes, but noted that infections were likely to persist at the current rate. There would be no longer days with zero cases, he said.

If people thought to have been in contact with the virus were honest about their movements and people they had met, the Covid-19 situation in the country would gradually improve, Gen Natthapon said.