In a statement, the MRTA, the state agency overseeing the project, insisted the chapel and century-plus old pagoda would not be expropriated as feared, and promised only a limited impact from the construction on the temple premises.

The assurance follows a social media uproar against the agency, when the Facebook page run by Wat Iam Woranuch posted that the temple land would be appropriated for the 125-billion-baht mass-transit system.

The Facebook post also stated that 237-year-old chapel known as "Viharn Luang Pu Thuad" and the pagoda on the temple grounds would also be demolished in exchange for an MRTA Purple Line station.

The temple is located on a two-rai plot in Phra Nakhon district near Bang Khun Phrom intersection.

Despite it having been there for centuries, the temple is quiet peaceful without amulet selling and popular Buddhist monks to bless or perform spiritual blessings to visitors.

Early next week the MRTA and the project consultant will meet with temple officials to explain the project in detail, said Sorapong Paithoonpong, deputy permanent secretary for transport. He said the current work involves inspection of land earmarked for construction of the entrances/exits of Bang Khun Phrom station, with one of them located outside the temple.

The cabinet has approved a draft regulation on land appropriation for the project. The MRTA has surveyed more than 410 plots of land covering 102 rai and 264 homes.

The MRTA is scheduled to call a bid early this year for the 23.6km Purple Line extension from Tao Poon-Rat Burana worth a total of 125 billion baht. The bid winner is expected to be announced in August or September, with six years allotted for construction.

Phra Maha Soi Sitthimethee, the temple's secretary, said the temple has lodged a petition with the MRTA after discovering that the portion of temple land to be appropriated had increased from four metres initially to six.

He said the extra two metres have triggered concerns that the white chedi or pagoda, and Viharn Luang Pu Thuad may be damaged or even demolished by the construction.

According to the monk, when the MRTA initially approached the temple in 2013 about the mass-transit project, it did not mention anything about using the temple grounds as part of the train station.

"If the temple is appropriated as planned by the MRTA, it will affect two pavilions, a house which is on the temple grounds, the wiharn and the white chedi," he said. 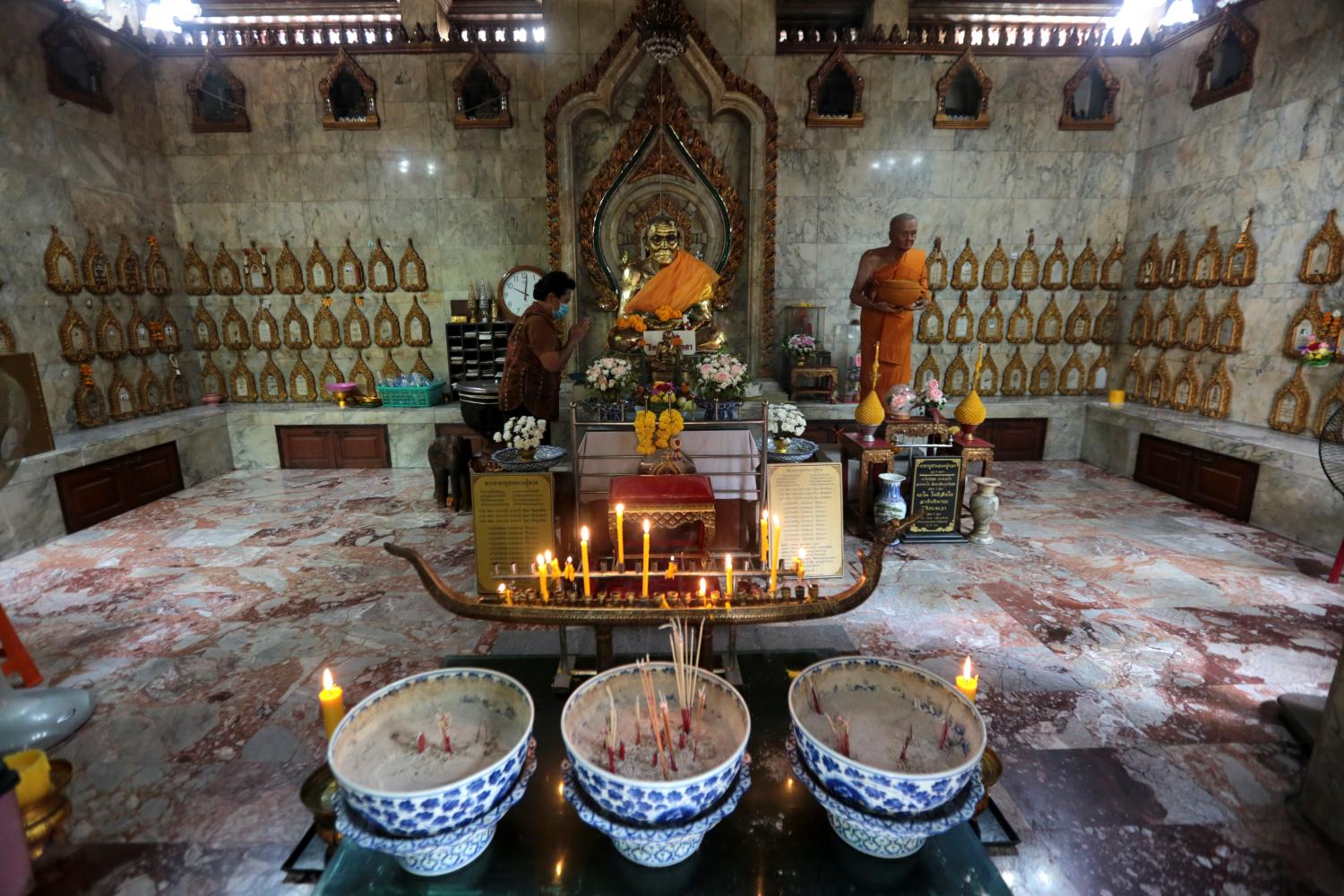 A woman pays respect to the statue of Luang Pu Thuad inside the 237-year-old chapel on the grounds of Wat Iam Woranuch in Bangkok's Phra Nakhon district. The small, quiet temple has attracted public attention following reports that part of the premises will be expropriated for the construction of an MRTA Purple Line station. (Photos by Chanat Katanyu)

Phra Maha Soi said the temple will petition the National Office of Buddhism today seeking intervention and he is hopeful the impact will be minimised.

"It is not just the temple, but other ancient structures, homes and shops in the surrounding community that will also be done away with," said the monk.

Mananya Poonphokha, a 61-year-old noodle vendor, agreed that the MRTA should redesign its station to minimise impacts on the pagoda.

"The temple abbot is very kind and he hardly refuses any requests. It's really bad if they don't honour the agreement made with the temple. The MRTA had better redesign the station, making it smaller," she said.

Firebrand activist Srisuwan Janya, secretary-general of the Association for the Protection of the Thai Constitution, said the appropriation of the temple land for the Purple Line project goes against the constitution.

He said Wat Iam Woranuch is a religious site and closely connected to the Buddhist community and state agencies are required by Section 27(1) of the charter to safeguard sites of religious and cultural importance.

Moreover, the temple is also a listed historical site and thus protected by the Ancient Monuments, Antiques & National Museums Act.

Mr Srisuwan said he will join forces with the Buddhist community in taking the MRTA to the Administrative Court if it does not back down from the land appropriation plan.

"The MRTA has only one choice and that is to find a new site for its train station," he said.