The armed forces plan to trim the number of generals in its ranks by 25% by 2029. (Bangkok Post file photo)

The armed forces are embarking on an ambitious programme to trim the number of generals in its ranks by 25% by 2029, amid doubts that the plan will ever come to fruition.

At present, the number of generals across the three branches of the armed forces, as well as the Royal Thai Armed Forces (RTARF) and the Defence Ministry is estimated to be about 1,400. This figure has remained largely unchanged since about a decade ago.

To achieve the target, Maj Gen Teerapong Pattamasingh Na Ayuthaya, deputy spokesman of the RTARF, said the armed forces have agreed to start small by targeting a 5–10% cutback in the number of generals.

To do so, it was agreed that plans to set up new high-level units that require at least a two-star general in charge will be delayed, while redundant units will be disbanded.

Also, the military leaders agreed two weeks ago that the appointment of "experts, specialists and special experts" who usually hold the rank of general will be aggressively scaled down. When these senior officers retire, they will not be replaced.

When implemented, these measures will help reduce the number of generals across the forces by 5–10%, they said.

The proposed reduction of "experts, specialists and special experts" positions is instrumental to the military's reform and downsizing, according to a source.

These positions, which do not have specific job descriptions, are seen as a mechanism to address problems arising from the allocation of key and commanding posts. 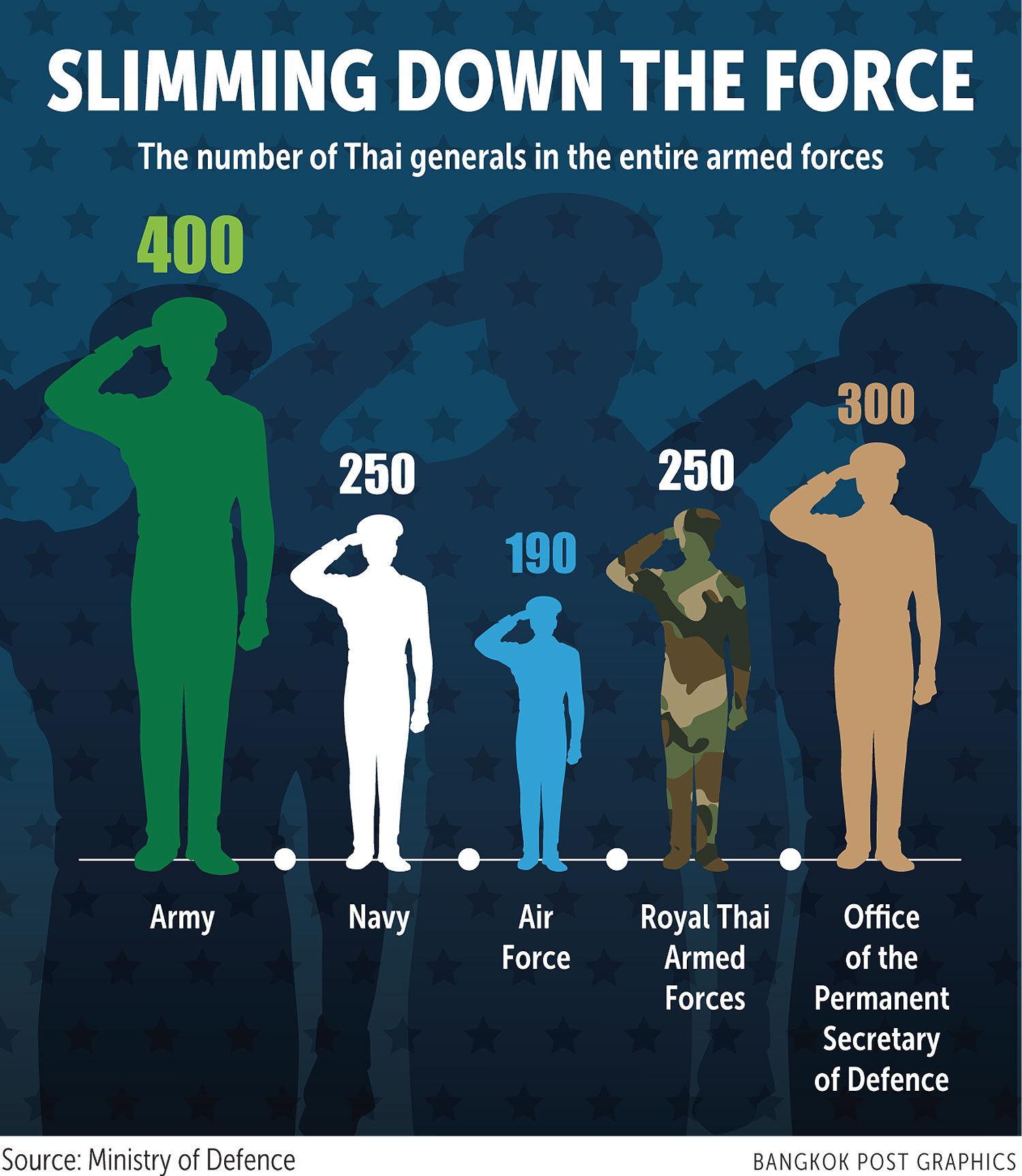 More often than not, they are consolation prizes for senior officers who missed out on key posts, or those who are waiting for their promotions in the next reshuffle, according to the source.

Moreover, these "experts, specialists and special experts" positions come with allowances ranging between 20,000 and 30,000 baht per month, said the source.

The monthly allowances for "experts, specialists and special experts" positions were not granted until 2008 when the late Samak Sundaravej was the prime minister and defence minister.

At that time, Interior Minister Anupong Paojinda was the army commander.

The source said it remains to be seen if the plan can be implemented and noted that the changes may not be reflected in the upcoming mid-year military reshuffle.

The proposed reshuffle -- said to be a minor one involving 200 positions -- has been reviewed at the meeting of a seven-member panel chaired by Prime Minister and Defence Minister Prayut Chan-o-cha on March 2.

The list is being examined before it is forwarded for royal approval by March 15.

Defence Ministry spokesman Kongcheep Tantravanich insisted the downsizing of the armed forces actually started when the cabinet approved the employment of civilians in the Defence Ministry in June last year.

Under the scheme, those recruited by the military to serve in certain fields such as medicine, law, accounting or administrative affairs are not given military ranks, he said.