Riot police raise their shields as they restrain a demonstrator during clashes on Saturday night near Sanam Luang. (Reuters photo)

The confrontation at Sanam Luang came after demonstrators used ropes to pull down part of a wall of shipping containers erected to keep them from advancing toward the Grand Palace. Waiting behind the containers was a line of riot-control officers and a water cannon truck.

After warning the crowd of about 1,000 not to advance any further, police initially fired water cannon into the air from behind the container barricade. But the crowd did not back off and riot police moved in.

Numerous scuffles erupted and the police response intensified. Video from the scene showed rubber bullets being fired, and witnesses said tear gas was also being used.

By 9pm, police had cleared the area around the containers but small skirmishes were continuing in nearby streets. Officers chased down some demonstrators and wrestled them violently to the ground.

Volunteer medics at the scene estimated that about 30 people had suffered injuries, and police said that five people had been arrested.

Some hardline demonstrators began regrouping at the Kok Wua intersection near Democracy Monument. Police were seen donning gas masks as they prepared to move onto Ratchadamnoen Nok Road.

The demonstration organised by the Redem (Restore Democracy) group was preceded earlier in the day by a raid on a publishing house and the seizure of a controversial book about the monarchy.

Redem, one of several groups in the increasingly splintered pro-democracy movement, has made reform of the monarchy the centerpiece of its campaign. It has made no secret of its hardline stand, announcing its latest rally by posting a notice online featuring a red guillotine.

Nonthaburi police, armed with a search warrant, visited Samesky Publishing Co, known for its liberal publications, around noon on Saturday.

They seized 179 copies of a booklet titled Monarchy and Thai Society, which is a transcript of a speech made by lawyer Arnon Nampa during a Harry Potter-themed rally staged near Democracy Monument on Aug 3 last year.

They acted after Redem posted on Facebook that 10,000 copies of the booklet would be distributed by a group calling itself Arnon’s Friends at the Sanam Luang rally site at 7.19pm.

Police said they needed to obtain evidence to build a case, and that the book could be illegal to possess, use or plan to use to commit a crime.

Same Sky Books later said on its Facebook page that while it had copies of the book, “we were not the ones who printed them”.

In response, Redem posted a link where people could freely download a PDF version of the booklet, urging people to read it together at 7.19pm.

Mr Arnon, together with several protest leaders, has been detained at Bangkok Remand Prison for almost a month on royal defamation and other charges. The courts have rejected six bail applications so far.

All told, 73 people are reported to have been charged with lese majeste under Article 112 of the Criminal Code since November, when Prime Minister Prayut Chan-o-cha vowed that “all laws” would be used against critics of his government.

Police told a briefing on Saturday that they had prepared 3,000 men to handle any developments later in the day.

They insisted on the need to erect long barriers of double-stacked container barriers and razor wire to protect important places near Sanam Luang, such as the Grand Palace, Bangkok City Pillar Shrine, Wat Phra Si Rattana Satsadaram and the National Museum.

At least four groups under the Ratsadon umbrella had announced plans to join the rally. They are Free Youth or Redem, from 6pm to 9pm; Free Art (6.30pm), Arnon’s Friends (7.19pm) and Ratsskate, which invited people to skateboard at the site.

In spite of police efforts to stop the distribution of Mr Arnon’s booklet, several physical copies were also handed out at the rally site.

White kites were also sold, and people were invited to have headshots of detained protesters screened on them in colours of their choice. The idea was to fly the kites above the Grand Palace grounds.

Kite-flying was once a common activity at Sanam Laung until it was fenced off and reserved for royal ceremonies almost 10 years ago.

Since last year, police have built 179 cases against protesters, 129 of which have been sent to public prosecutors, according to police. 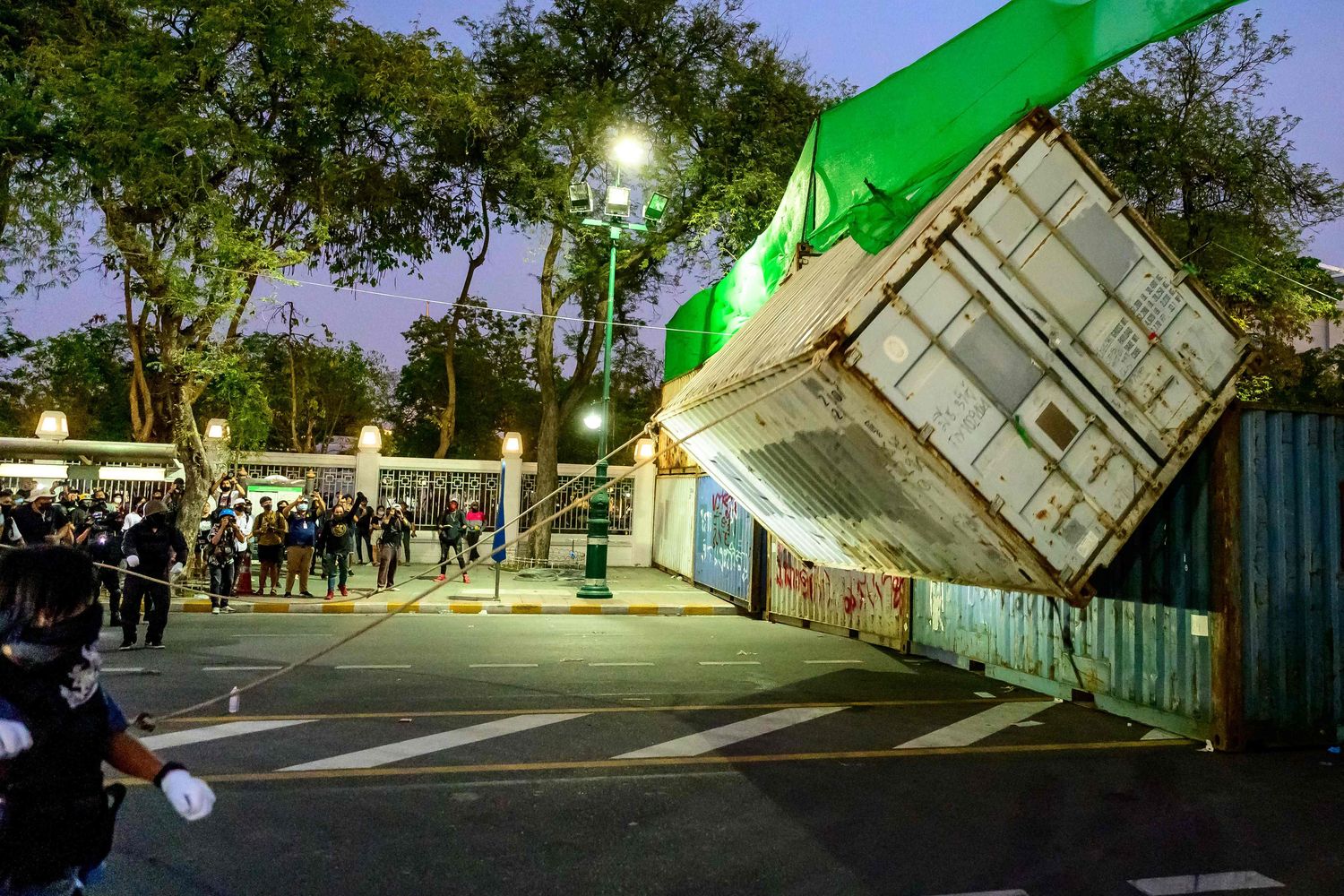 Protesters pull down a shipping container set up to block access to the nearby Grand Palace. (AFP photo) 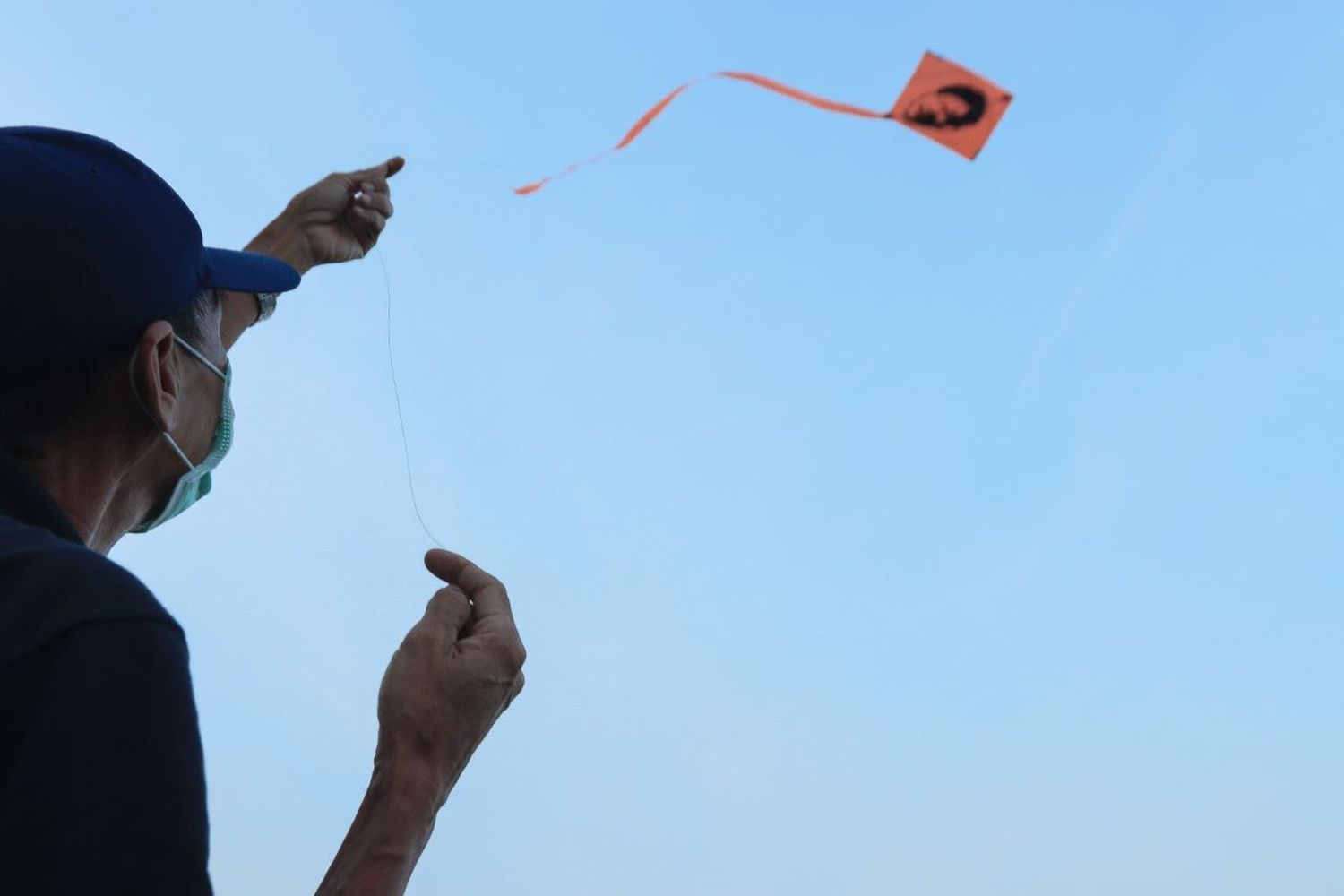 A demonstrator flies a kite bearing an image of jailed activist Arnon Nampa. (Photo by iLaw)