'We did nothing wrong'
Thailand
General

'We did nothing wrong'

Police have defended their harsh actions against protesters at Sanam Luang on Saturday night amid mounting criticism from activists and academics.

The violence left 20 people, including three reporters, and 13 police injured, according to the Erawan Medical Centre. A reporter from Channel 8 TV was hit in the head with a rubber bullet. About 20 protesters were arrested for breaking public gathering laws and insulting the monarchy.

"Violence originated from the protesters' side and police have to defend the law and protect state assets," said a deputy commissioner and spokesman for the Metropolitan Police Bureau.

Police faced a firestorm of criticism after a video clip showing police chasing protesters and hitting them with batons to subdue resisting protesters went viral.

One of the protesters was hit after he fell down with others fleeing police in riot gear. Some protesters abandoned their motorcycles. Another video showed people taking refuge from tear gas in a restaurant.

The incident in the clip took place about 10pm at Chaloem Wanchat Bridge in Bang Lamphu area. Police said they fired tear gas after some protesters hurled Molotov cocktails at them.

Police then decided to arrest them and eight people were nabbed at the scene.

However, protesters slammed police for causing the violence.

"Violence came from them [police] as they used tear gas and water cannons before protesters did anything," said activist Rukchanok Srinork, 27, who was at the rally. "They have helmets, shields, crowd control training. If there is a stone thrown, raise your shields." 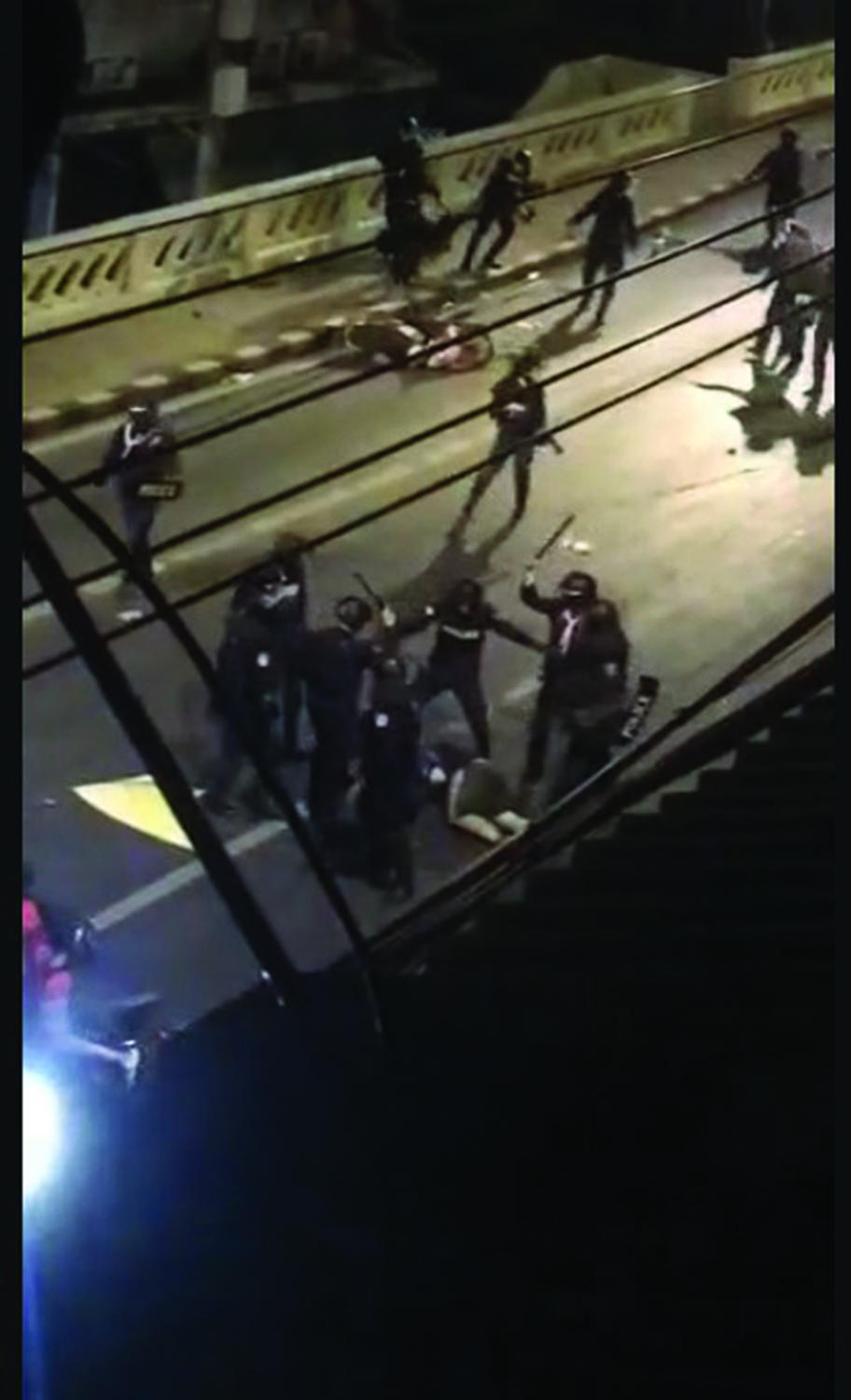 A screen capture from a video clip which has gone viral shows a protester being attacked by anti-riot police on Chaloem Wanchat Bridge on Saturday night.

He said their method of shooting rubber bullets violated a universal guideline on deploying kinetic impact projectile weapons by the Office of the United Nations High Commissioner for Human Rights (OHCHR).

"According to the OHCHR guideline, guns must be aimed below the abdomen or the legs, but as far as I can see, the guns were parallel to the ground which was unlawful as it could cause people [to lose their] lives.

"They also deployed the weapons when people were about to disperse, and towards journalists," he said. Some injured people were hit by bullets in the temple, chest and upper torso.

Six media organisations yesterday called on both protesters and riot police to refrain from using weapons and force and provoking violence. They urged journalists covering such conflicts to ensure their own safety.

"Once again every reporter and cameraman covering a political rally should wear a press armband any time they go out to work.

"After all, the arm band doesn't guarantee their safety but their [police] protective gear does," said the groups in joint remarks.

National Human Rights Commissioner of Thailand Prakairat Tanteerawong said the NHRC would hold a meeting on the issue today.

WASHINGTON: The Pentagon said Thursday that it was tracking a Chinese spy balloon flying high over the United States that appeared to be surveilling highly sensitive nuclear weapons sites.

SAINT-ÉTIENNE, France: A convicted Italian killer, believed to belong to one of the country's most powerful mafia organisations, was arrested on Thursday in France after 16 years on the run, Interpol said.

WARSAW: Polish Sports Minister Kamil Bortniczuk on Thursday said he expected several dozen nations to come out against the inclusion of athletes from Russia and Belarus in the 2024 Paris Olympics.