The cabinet yesterday approved financial relief measures worth 350 billion baht to help the business sector recover from the impact of Covid-19 after the existing 500-billion-baht aid programme underperformed. 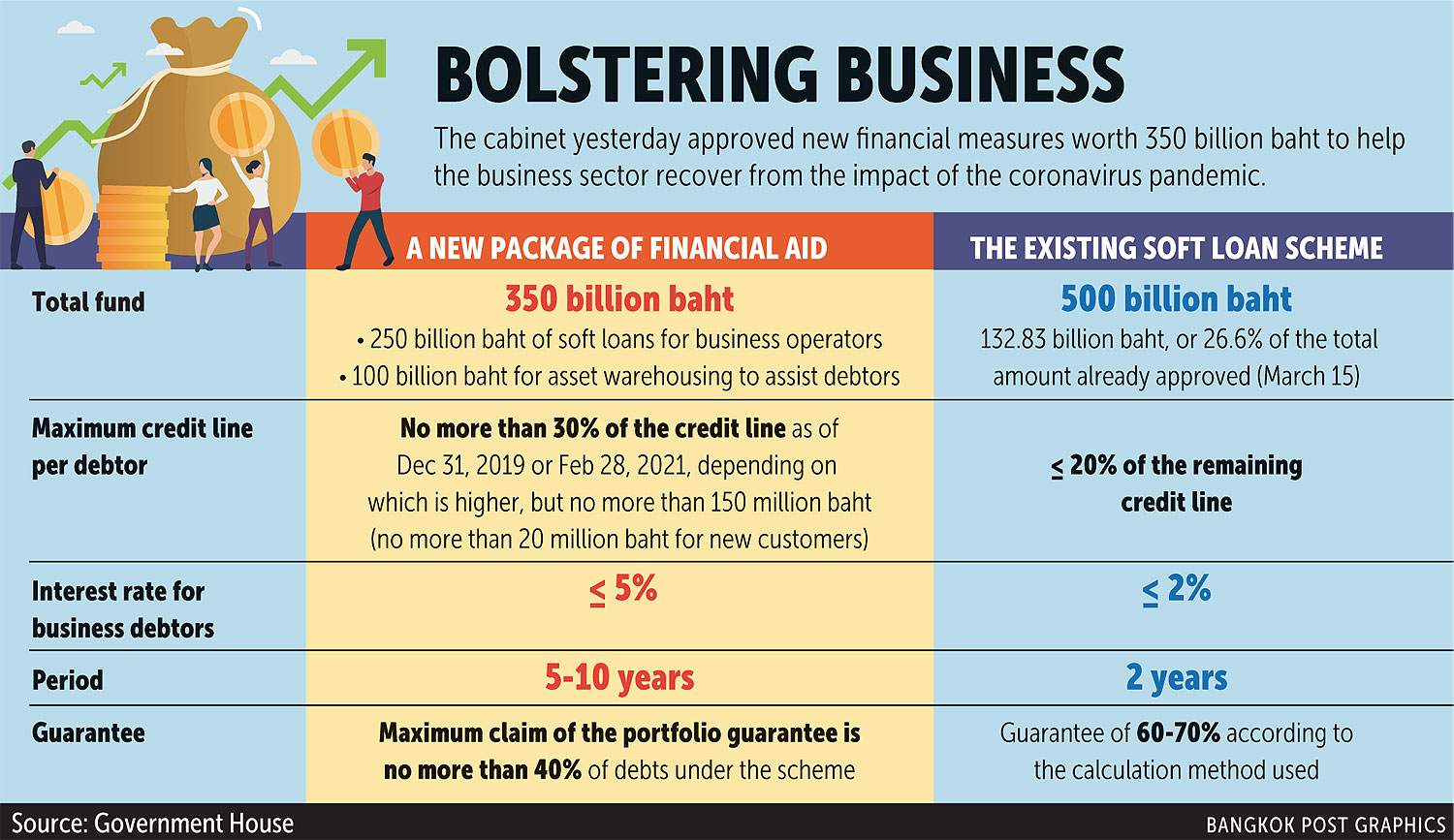 The measures include 250 billion baht of soft loans provided by the central bank and another 100 billion baht for asset warehousing to assist debtors who are still unable to repay loans.

This measure aims to address limitations of the existing 500-billion-baht soft loan measure by expanding the pool of eligible borrowers to include both new and existing borrowers, raising credit limits, lengthening loan tenors, and amending interest rates to better support a business recovery, the Bank of Thailand (BoT) said.

Effective from April 2020, the 500-billion-baht soft loan decree has underperformed, with the disbursement rate falling below expectations.

Some 132.8 billion baht worth of soft loans or only 26.6% of the money under the scheme had been disbursed to SMEs as of March 15, according to central bank data. As for the 100 billion baht for asset warehousing, the measure includes the transfer of collateral assets for debt settlement and giving debtors the right to rent their assets or buy back their assets later.

The programme will prevent businesses such as hotel operators from having to liquidate distressed assets at firesale prices or from going out of business because of their debts.

BoT governor Sethaput Suthiwartnarueput told a briefing yesterday that the economy is expected to return to pre-Covid levels in the third quarter of next year, with the recovery slow and uneven as tourism remains sluggish.

The tourism-reliant economy could take at least four to five years to see the number of foreign tourists return to normal levels, he said.

"The existing measures are not enough to deal with the current sluggish situation which is lasting longer than expected. Therefore, it is necessary to roll out two new measures which are more flexible," Mr Sethaput said.

The cabinet yesterday also approved the extension of the (We Travel Together) scheme to cover an additional 2 million people, to boost domestic tourism.

Earlier, the cabinet had turned down the proposed Rao Tiew Duay Kan extension, after the first stages were found to be riddled with fraudulent claims. It instructed the Tourism Authority of Thailand (TAT) and the Tourism and Sports Ministry to redesign it to prevent further misuse.

At the cabinet meeting on March 9, the TAT presented improvements and proposed extending it to cover more than 2 million more people and lengthening it.

It was due to end on April 30 but under the proposal approved yesterday, it will run to Aug 31.

Launched on July 15, 2020, the domestic tourism stimulus policy was part of the government's effort to spur domestic travel, with foreign tourists still largely refused entry because of the pandemic.