The late Duke of Edinburgh had many strong connections with Thailand, from ex-prime ministers to journalists

Prince Philip, Duke of Edinburgh, was no stranger to Thailand. Accompanying Queen Elizabeth II, he visited the Southeast Asian kingdom twice in 1972 and 1996.

They were the guests at the 50th anniversary (Golden Jubilee) of His Majesty King Bhumibol Adulyadej The Great's accession to the throne in 1996.

A graceful down-to-earth prince who was dedicated to his duties while being a warm family man will remain the impression of the late prince in the minds of many Thais.

Ladavan Bua-Aim recalled the time when she was a Chulalongkorn University student in the audience when the prince, accompanying Queen Elizabeth II, visited the university in 1972. They were shouting "God Save The Prince" after "God Save The Queen" when their majesties walked past them. The prince leaned towards them with a big smile and asked her group whether they were wishing him well too.

Former prime minister Abhisit Vejjajiva also shared an experience when he had an audience with the British monarchs.

"The Duke of Edinburgh has been at Her Majesty Queen Elizabeth II's side for more than seven decades. I shall always remember him as someone who has devoted his life in support of the Queen and providing stability to the institution of the monarchy and the United Kingdom. His down-to-earth style and humour are also standout characters that will be hard to forget," the former prime minister said.

"I had the privilege of being granted an audience when the queen hosted a reception for G20 participants in 2009. While the greetings were formal and the conversation brief, I could still detect his warmth and amicability."

Having been to an English public school, it is easy to see what values he represented, Mr Abhisit added, pointing to the values of striving for excellence, discipline and dedication to fulfilling one's duties.

"There are many similarities between the Thai and the UK political system. The importance of the monarchy is one, and therefore that plays a role in how Thais feel about the British monarchy," Mr Abhisit said.

Surasak Marktavee, a football journalist who has been living in the UK for 23 years echoed the feelings. "I feel connected as I love the monarchy system, just like in Thailand. I see [the monarchy as] the centre of heart and unity," he said.

In 1997, the first year he moved to the UK, Mr Surasak went to pay tribute to the late Princess Diana at Kensington Palace. If there was no Covid-19 this year, he would have done the same for the Duke of Edinburgh, he said. On Saturday, he watched the funeral ceremony on TV, adding he was glad to have accidentally seen the prince in public twice.

Besides being a member of the royal family and the great example of a good husband, Mr Surasak also praised the late prince for his roles in more than 780 charity organisations, plus his French and German language skills that also helped international relations.

Despite only learning about the prince through the Thai media reports, 105-year-old retired army officer Swang Khamasundara said the Duke of Edinburgh, who died on April 9 at the age of 99, had performed his duty nobly and elegantly. "He respectably performed his duty as a member of the royal family and never tried to outshine the Queen," the retired army officer said of his impression of the late prince. 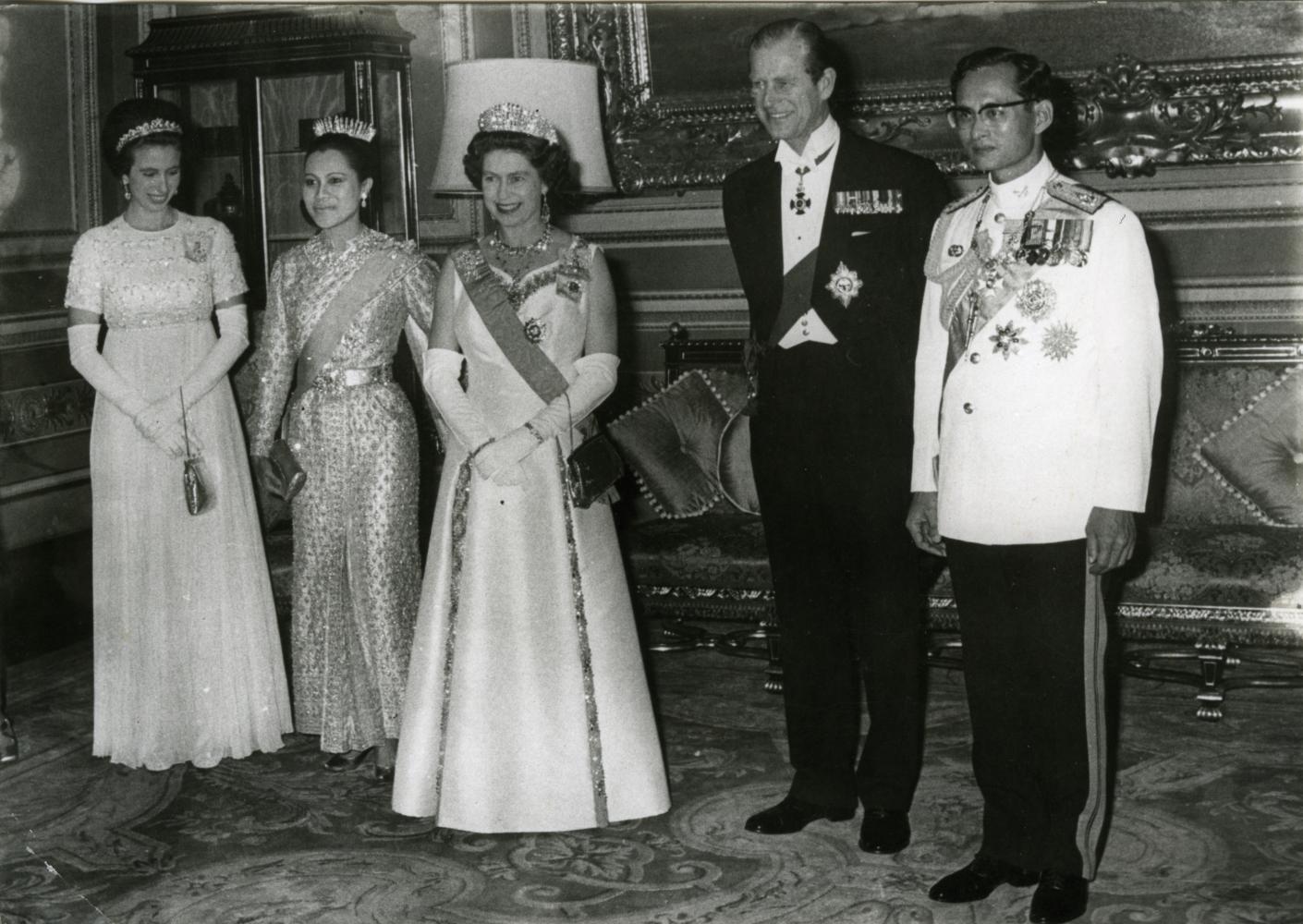 Queen Elizabeth II and Prince Philip join a reception dinner hosted by His Majesty King Bhumibol Adulyadej The Great and Her Majesty Queen Sirikit The Queen Mother at the Chakri Maha Prasat Throne Hall in the Grand Palace on Feb 12, 1972, during the English royals' first official visit to Thailand. Royal Household Bureau

Thairath TV journalist Pensopa Sukontarak said she learnt about the work of the late prince from international news.

"My personal impression of the prince is that he had for a long time stood by the side of Queen Elizabeth II, like a legend of love story. We know that the British monarchy under the queen has passed through so many key events in the world's history for six decades," she said. Ms Pensopa, who is also a movie fan, also recalls the scenes from the Netflix series The Crown.

"He was clearly a family man. He loved to play with children. When he was away for work for a long time he would run around and hug his children."

The recently released picture showing the Queen and Prince Philip looking at ease and are smiling warmly at the Coyles of Muick near the Aberdeenshire town of Ballater, Scottish Highlands, is now Ms Pensopa's favourite image.

Similarly, 39-year-old business analyst Siriarpa Kamjan said that if British actress Emma Watson is a well-known feminist of this generation, then Prince Philip should be praised as a legendary feminist since early 1950s when his wife Queen Elizabeth II ascended to the British throne.

"In my opinion, the late prince played a feminist role for being a man who supported Queen Elizabeth II for more than seven decades and was the bedrock of his family," she said.

"It was not because he kneeled before the queen at the coronation, of course. Learning about Prince Philip's life through a number of articles and TV programmes, I think he was the queen's devoted husband and best friend," she said.

After his death, she discovered that the queen and Duke of Edinburgh had visited Bristol many times. As an alumnus of Bristol Business School, she wishes she could join her friends in Bristol to pay tribute to him.