The Songkran Festival is not just about water-splashing fun. The festival also serves as emotional glue that links many family members who reunite over what is the traditional Thai new year. It has been a time when elders wait for their children who live and work in big cities to return home.

But the spirit of Songkran has withered over the past two years since the Covid-19 pandemic emerged. Last year, the government imposed a travel lockdown, and banned all fun-filled signature activities -- water splashing, and party foam.

The situation was a tad better this year. Even if the government refrained from imposing a travel lockdown, Songkran was a bit dry as the government kept in place its ban on water splashing.

Inter-provincial travel dropped about 25% as provinces issued 14-day quarantine requirements for those who travelled from high-risk provinces. Grandparents begged their grandchildren to stay put and not return home. 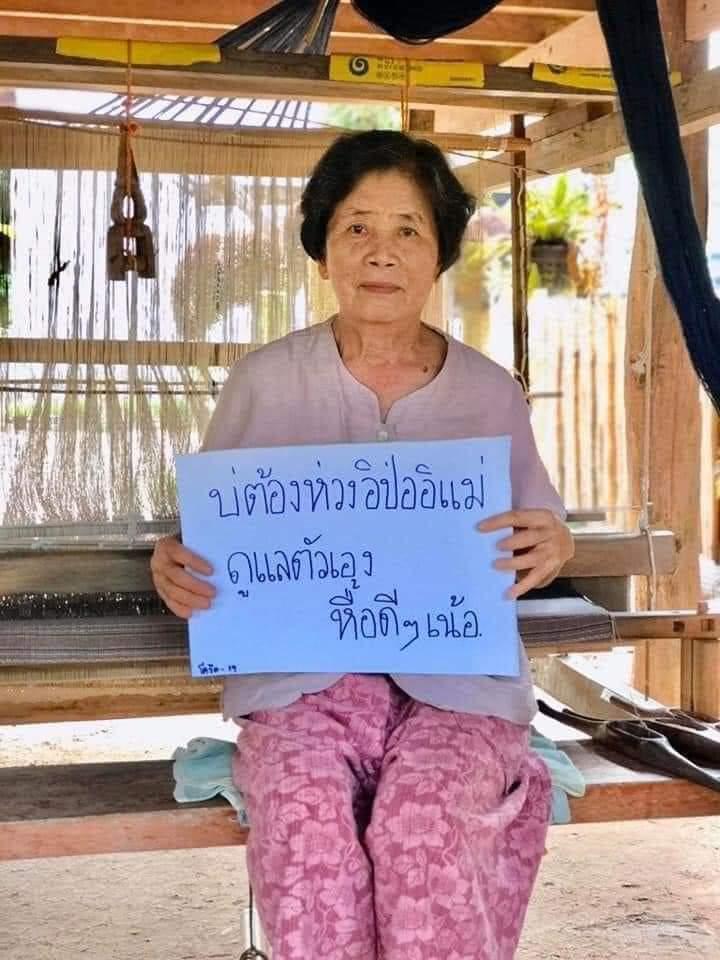 Elderly people display messages, written in thier local dialect, urging thier children and grandchildren to delay their visits and stay safe during the Covid-19 outbreak. photos by Narongrit Baisee

Narongrit Baisee, 35, a business owner, said if Covid-19 drags on for a few more years, the festival could become a dated cultural activity that people will start to forget.

People try to adjust. Mr Narongrit said parents in some northern provinces had posted heartfelt messages on social media in local dialect telling their offspring to stay where they are.

"This technology lets us to express our concern and make us closer again. Grandchildren made video clips to grandma and talked to her on social media," he said.

Purin Sirisupmunkong, 35, who works for a company supplying medical equipment to hospitals, cancelled plans to visit his parents and 90-year-old grandma in Sa Kaeo province.

Usually, he drives home three times a month, and had planned to spend the long weekend with his family over Songkran.

But the third Covid-19 outbreak prompted him to abandon his plan. Mr Purin had visited hospitals and may have been in contact with patients carrying the disease. Also, his hometown is a red zone. With that, he decided to stay at home in Bangkok and worked during the holidays instead.

"I do not want to risk my parents coming into contact with the virus if I am carrying it. I must think carefully when I want to see them as their health is vulnerable and they are in old age," he added.

"The Songkran Festival comes once a year and the elderly look forward to the family reunion which often takes place. So, by abstaining from this, they could end up depressed and unhappy. Therefore, they need special care and attention to heal their feelings."

According to a department survey, 50-60-year-old folks in the provinces are the most inclined to commit suicide, because of their poor financial state and isolation. He suggested technology could help ease the situation.

"Thanks to the technology, we can make a video call and explain why people are concerned for their health amid the outbreak. By doing so, they won't feel so alone. Offspring can also transfer money via bank apps," he added.

EVEN LOVE HAS TO WAIT

The Covid-19 pandemic has been a festival killjoy for sure, but that not all it has touched. It also disrupts once-in-a-lifetime events. Many couples have had to postpone their weddings to observe social distancing rules.

One couple have already postponed their plans to tie the knot twice.

At first, the couple decided to wed on Oct 24 last year but decided to wait for another year. Late last year, they decided to get married and hold the party celebration this April. The third outbreak thwarted their plan again.

"We have already invested a lot in this wedding: to date, 800,000 baht on hotel reservations, dresses, decorations, photographers, card printing, and so on," the bride-to-be said.

She said that all up, by the time everthing is complete, the wedding will have cost 1.7-1.8 million baht.

"Everyone would think that postponing the wedding is just a matter of postponing the date, but actually it is not. It means you have to change almost the entire wedding plan and every change costs a lot. It is a burden for both of us," she said.

Asked why she decided to postpone her wedding next week, she said that as a doctor, she needs to set an example. Among the 500 guests invited, 150 are her colleagues and friends from hospitals. She decided it might not be appropriate for her and her doctor friends to celebrate at such a sensitive time.

"I do not want to make my profession look bad as we constantly tell people to practise social distancing but we go back on our own word," she said.

She will forever remember the Covid-19 pandemic as a party pooper. She even admitted their feelings for each other were no longer as intense as they once were.

"Initially I just thought that 'just get it done. I am tired and sick of this'. But then, a wedding is once-in-a-lifetime activity and I do not want to look back and regret that I did not make it a special event for me, my partner and our guests. So, I decided to wait for the day we can do it again," she said.