PATTANI: Three family members were killed and two pickup trucks burned when assailants opened fire on the vehicles, which burst into flames, in Sai Buri district on Saturday morning.

The attack occurred on Pattani-Narathiwat Road No 42 in tambon Laharn, said Sai Buri police who were alerted around 6.30am. Officers who rushed to the scene found two people dead inside one of the burned-out pickups. Another one was seriously hurt and rushed to a nearby hospital, but he was pronounced dead shortly afterward.

The victims were later identified as Suporn Kittiprapanan, 58, who was found dead in the driver’s seat with gunshot wounds to his head and body, and his daughter Jiraporn Kittiprapanan, who had been badly burned. Santipattana Kittiprapanan sustained serious burns and died in hospital.

More than 30 spent cartridges of M19 and 9mm ammunition were found scattered over the road.

Police said the three family members had travelled from Hat Yai district in Songkhla in their Toyota Hilux Vigo pickup, loaded with foam and plastic products. They were preparing to deliver the goods to customers in Narathiwat province.

As they were driving through tambon Laharn, four assailants on two motorcycles suddenly overtook the pickup and the pillion ridders opened fire on it.

The attack caused Mr Suporn to use control of the vehicle, which hit a roadside tree and plunged into a ditch dividing the road. The gunmen walked toward the pickup and opened fire again before dousing it with petrol and setting it alight. The assailants then fled.

No details were available about a second vehicle that was reportedly burned.

Pol Lt Gen Ronnasil Phusara, chief of Provincial Police Region 9, led police and military officers to inspect the scene on Saturday and ordered a manhunt for the assailants.

Police said they initially believed the attack was related to the sectarian unrest that has troubled the three southern border provinces for the past two decades. 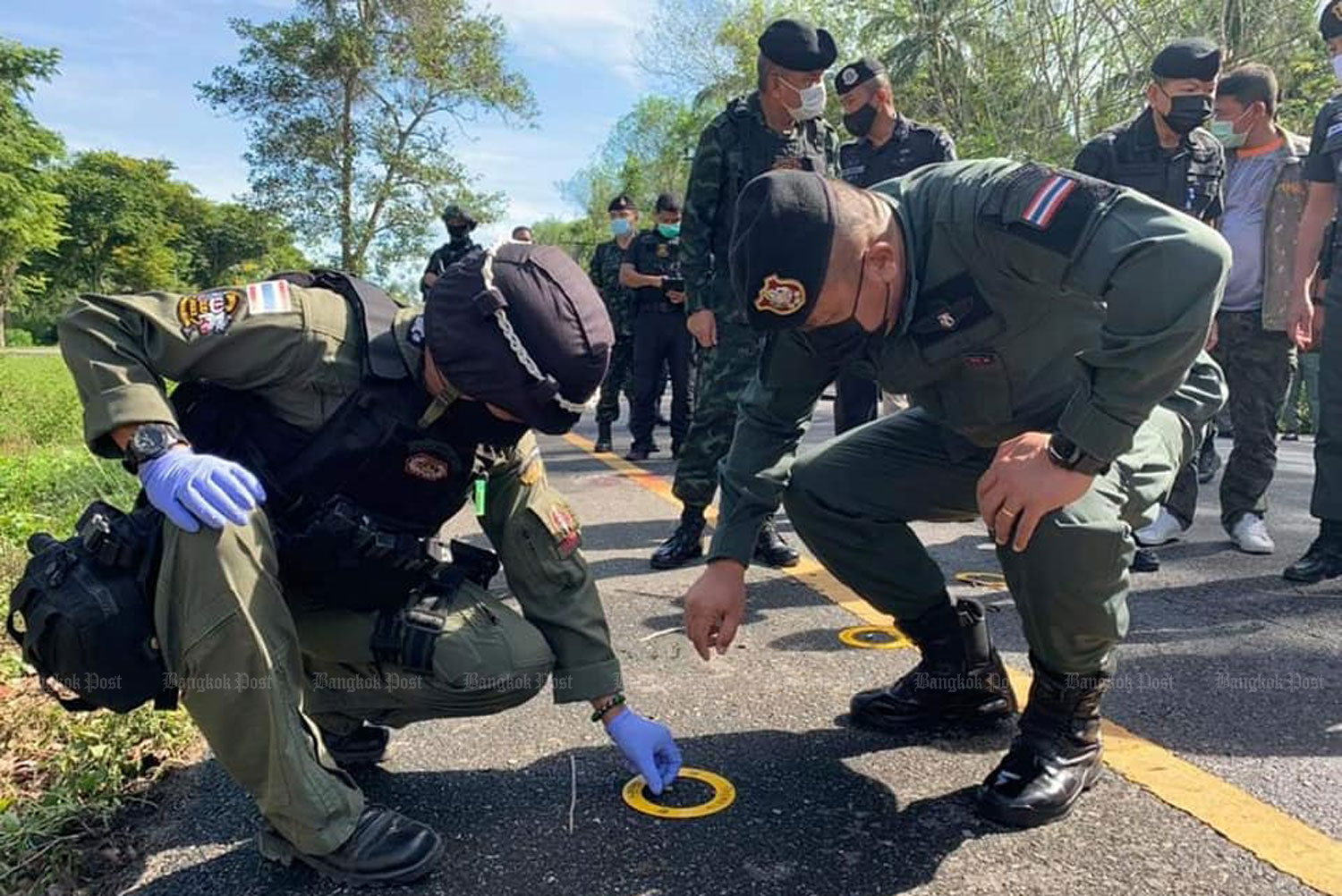 Officers collect spent cartridges from M19 and 9mm ammunition found scattered over the road in Pattani after the attack on Saturday morning. (Photo: Abdullah Benjakat)