Nearly 3,000 inmates at Bangkok's two main prisons -- Bangkok Remand Prison and the Central Women's Correctional Institution -- have been found to be infected with Covid-19.

Corrections Department director-general Aryut Sinthoppan revealed the 2,835 infections on Wednesday after democracy activist Panusaya Sithijirawatta­nakul marked her release on bail by telling her Facebook followers that she had contracted the virus. She acknowledged that many inmates have infections.

Ms Panusaya was released on May 6 after being detained for 59 days at the Central Women's Correctional Institution.

Mr Aryut said mass testing on prison officials and inmates had found 1,795 prisoners at Bangkok Remand Prison and 1,040 at the Central Women's Correctional Institution to be infected with the coronavirus.

Most of them were being treated at the field hospitals set up outside the two prisons or at the Corrections Hospital, he said, while those in a more serious condition had been admitted to outside hospitals.

"The Corrections Department has ordered all correctional facilities to set up an area for quarantine and a field hospital, with doctors and nurses on duty to provide treatment for the infected inmates," Mr Aryut said. 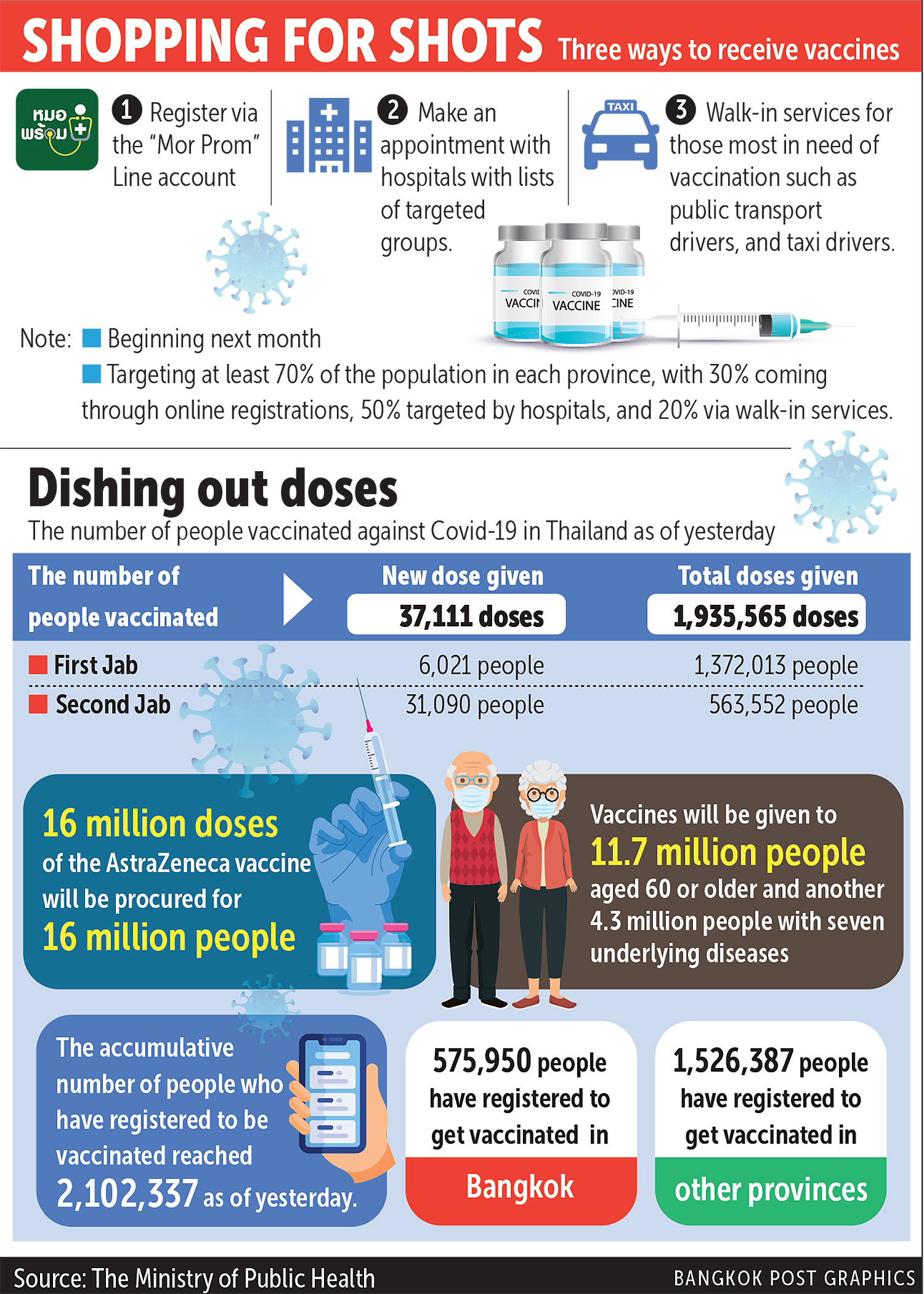 "We also plan to inoculate all detainees. We are just waiting for an allocation of vaccines from the relevant agencies."

New inmates were being placed in quarantine for at least 21 days and had to provide two negative tests before being moved to the usual wing, he said.

According to the Corrections Department, there were 3,238 prisoners at the Bangkok Remand Prison as of May 5 and 4,518 at the Central Women's Correctional Institution.

The prison studies.org website reports there were 307,910 people being held in Thai prisons as of April 1 this year, including pre-trial detainees.

Mathavee "May" Sithijirawattanakul posted on her Facebook page on Wednesday that she had contracted Covid-19 from her younger sister Panusaya, who has recently also been granted bail. She said she and her mother hugged Ms Panusya in front of the prison shortly after she had been released.

To prevent the further spread of Covid-19 across the country, Prime Minister Prayut Chan-o-cha and provincial governors have launched campaigns to persuade people to register for Covid-19 vaccine shots.

"While we are fighting against Covid-19, I'd like all Thais to receive the vaccines when they arrive -- for the sake of yourself, your families, your loved ones, and for the country," he said. "Everyone will then be able to resume their normal lives and the country can re-emerge stronger and move forward."

Pathum Thani governor Chaiwat Chuenkosum and Dr Surin Suebsueng, a provincial public health chief, have announced they are donating half their salaries to buy insurance policies that cover Covid-19 side-effects for the over 60s and those with seven underlying health problems.

In Udon Thani, provincial governor Sayam Sirimongkol on Wednesday chaired a meeting of various agencies to discuss a vaccination plan.

Later he said efforts were being made to administer vaccine doses to as many people as possible, with the booking process already accelerated. Officials have been told to develop a local version of the booking app "Mor Prom Udon Thani" for easy and quick registration for vaccine shots.