Americans plead for vaccines as top US diplomat visits

A group of prominent US citizens in Thailand has submitted an open letter to visiting US Deputy Secretary of State Wendy Sherman asking the US government to arrange Covid-19 vaccinations for its expatriate citizens.

“The US continues to have a growing vaccine surplus, yet many Americans abroad are still without access to vaccines and their lives are at risk,“ said the letter, written by Democrats Abroad Thailand chair Paul Risley, Republicans Overseas Asia VP Tony Rodriguez, Veterans of Foreign Wars commander Carl Manchester and American Women’s Club of Thailand president Ambreen Miraly.

With a third wave of coronavirus proving by far the most potent — Thailand has logged a daily average of nearly 3,800 new cases and 34 deaths per day over the past week — concerns have risen over the kingdom’s slow and chaotic vaccine rollout. While more than half the US population has now received at least one dose of the vaccine, that was true for just 3.58% in Thailand by the end of May, according to Oxford University-affiliated ourworldindata.org.

The letter noted that during her talks with Prime Minister Prayut Chan-o-cha and other senior officials, the senior diplomat is likely to discuss donating surplus coronavirus vaccines in the US to Thailand. “We urge that any agreement include enough donated vaccines to cover all American citizens residing in the Kingdom,” the letter said. “The Chinese government has agreed to a similar arrangement with Thailand for its citizens as part of its vaccine donation programme.”

The letter pointed out that unlike almost all other countries, the US required its citizens to pay taxes regardless of where they live. “Overseas Americans should be afforded the same taxpayer-funded vaccines that Americans in the US are receiving now, to fulfil President Biden’s commitment that every American is eligible for a vaccination provided by the US government.” 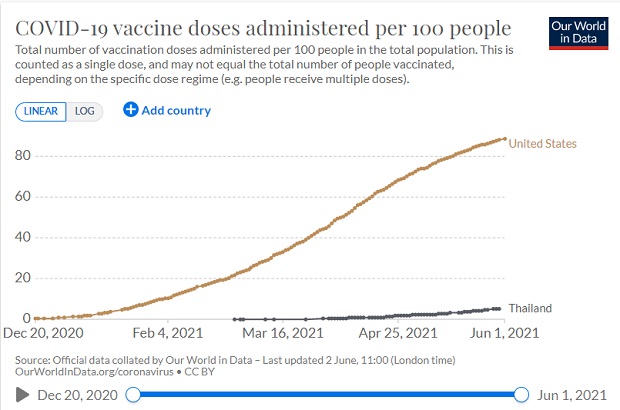