Seized rug may have come from poached clouded leopard

A rug seized in a crackdown last week might have come from one of two clouded leopards caught on camera in the wild at the Erawan National Park in Kanchanaburi's Sri Sawat district last December. 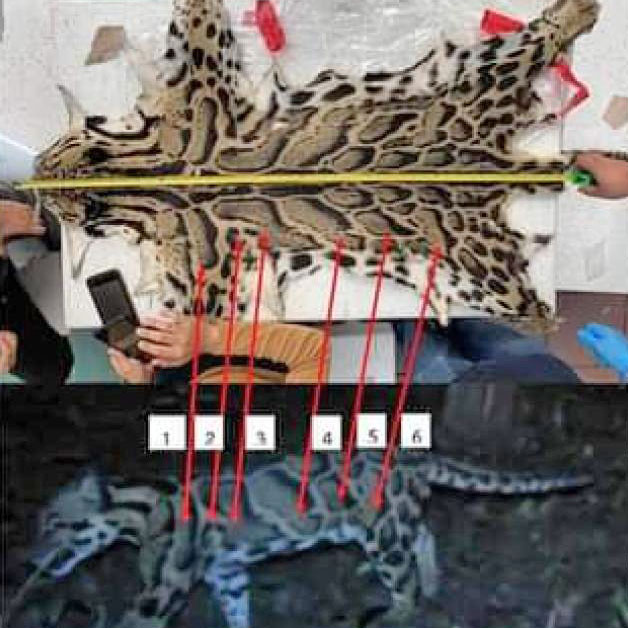 The Department of National Parks, Wildlife and Plant Conservation, in a recent Facebook post, said that up to 12 marks on the seized rug looked like those of a clouded leopard captured by a hidden camera in December last year.

The rug was seized in a sting operation carried out in Nakhon Pathom's Sam Phran district last Friday, in which Thirasak Chaiphuthongt, 40, was arrested, said a source.

The rug was posted on Facebook for sale at 7,500 baht.

Because two clouded leopards were caught on camera last December, police suspect both might have been poached.

A combined force of forest protection officers and police in Kanchanaburi on Wednesday searched a house in tambon Tha Sao in Sai Yok district, which is rented out to Prakop Chosanap, 74, whom police believe is a key member of an illegal wildlife trade ring.

He may have supplied the clouded leopard skin rug to Mr Thirasak, said the source.

Mr Prakop was not at the house during the raid.

The authorities found some equipment believed to have been used for carrying wildlife carcasses, said the source.

The force also asked the police to expand the investigation and catch members of the wider wildlife trade ring. It is unclear how big the gang is.

Clouded leopards are a protected species under both the 2019 Wildlife Conservation and Protection Act and the Convention on International Trade in Endangered Species of Wild Fauna and Flora (CITES).

The species is found in Nepal, Bangladesh, and Assam in eastern India and through Indochina to Sumatra and Borneo, as well as parts of southern China.

Because it has attractive patterns on its skin, the species is often hunted by poachers.