The government's nationwide Covid-19 vaccination rollout starts on Monday beginning with the first two groups of those who registered: the elderly, and those with seven underlying diseases.

Sathit Pitutecha, Deputy Minister of Public Health, said the Public Health Ministry had learned that many hospitals had postponed vaccinations booked for today as they were afraid they would not receive enough doses.

"We were aware of this problem, so we will try to ensure the elderly and those with the diseases who registered through the Mor Prom application get their jabs first.

''After that, the ministry will deliver the additional vaccines that we've received from the AstraZeneca company," he said.

The ministry has yet to receive clear information about when the company will deliver.

On June 3, the ministry received 1.8 million doses of AstraZeneca and it immediately distributed the vaccine the next day.

It had three three days left to ensure all vaccines were delivered to each province, he said.

Sinovac vaccines were added to this mix to ensure the amount of vaccines would be enough for the first seven days of the roll-out in small to mid-size provinces.

For provinces with many people registering such as in Lampang, the vaccine supply would be enough for only 2–3 days, Mr Sathit said. 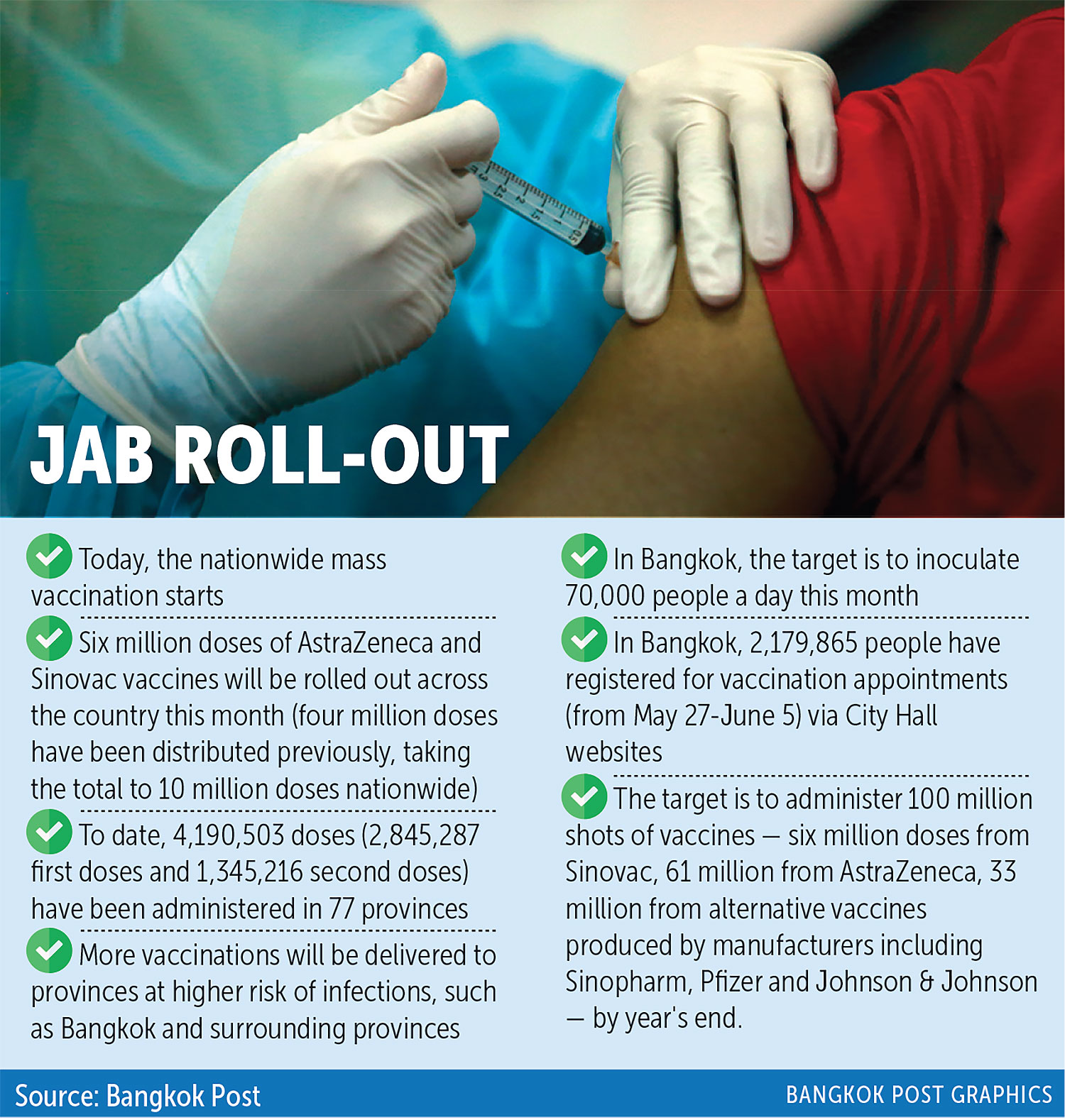 Asked about the postponements, Mr Anutin said he had asked provincial public health offices to tell hospitals in each province that they need to jab people from today onwards.

Many provinces were in a hurry to vaccine their citizens, and took bookings in excess of the amount of vaccines they received, with the result they ran out of vaccines before new lots arrived.

"I would like to emphasise that all Thais will get vaccinated according to the government's goal," he said.

Pol Gen Aswin Kwanmuang, the Bangkok governor, said the elderly and those with the underlying diseases who had missed registration via Mor Prom can register via the "Thai Ruam Jai" system.

He would ask for additional vaccines for them.

He also said that all 25 vaccine stations in Bangkok were ready to serve the people and registrations would be carried out via the "Thai Ruam Jai" application.

From today until June 14, if people come according to an SMS appointment, they would get AstraZeneca jabs.

City Hall expects to jab up to 70,000 people a day initially, levelling off to 38,000–50,000 people eventually. Progress would depend on the amount of vaccines received from the Public Health Ministry.