Senior police display over 500kg of crystal methamphetamine seized from four suspects in a major drug case during a media conference on Tuesday. The seizure of another 4.2 million speed pills and the arrest of seven suspects in two other drug cases are also announced. (Police photo via Wassayos Ngamkham)

Seized from the room were 516kg of crystal methamphetamine, a .38 gun with 12 rounds of ammunition, said police during a media conference on Tuesday.

Earlier, NSB police had seized about 20 million speed pills and 2,000kg of crystal methamphetamine and other types of narcotics and arrested suspects in seven major drug cases. The number of the arrested suspects was not provided.

The seized drugs had been smuggled from the Northeast and were stuffed in products for exporting to other countries. The investigators then extended the investigation that led to the arrest of the four suspects, said police. 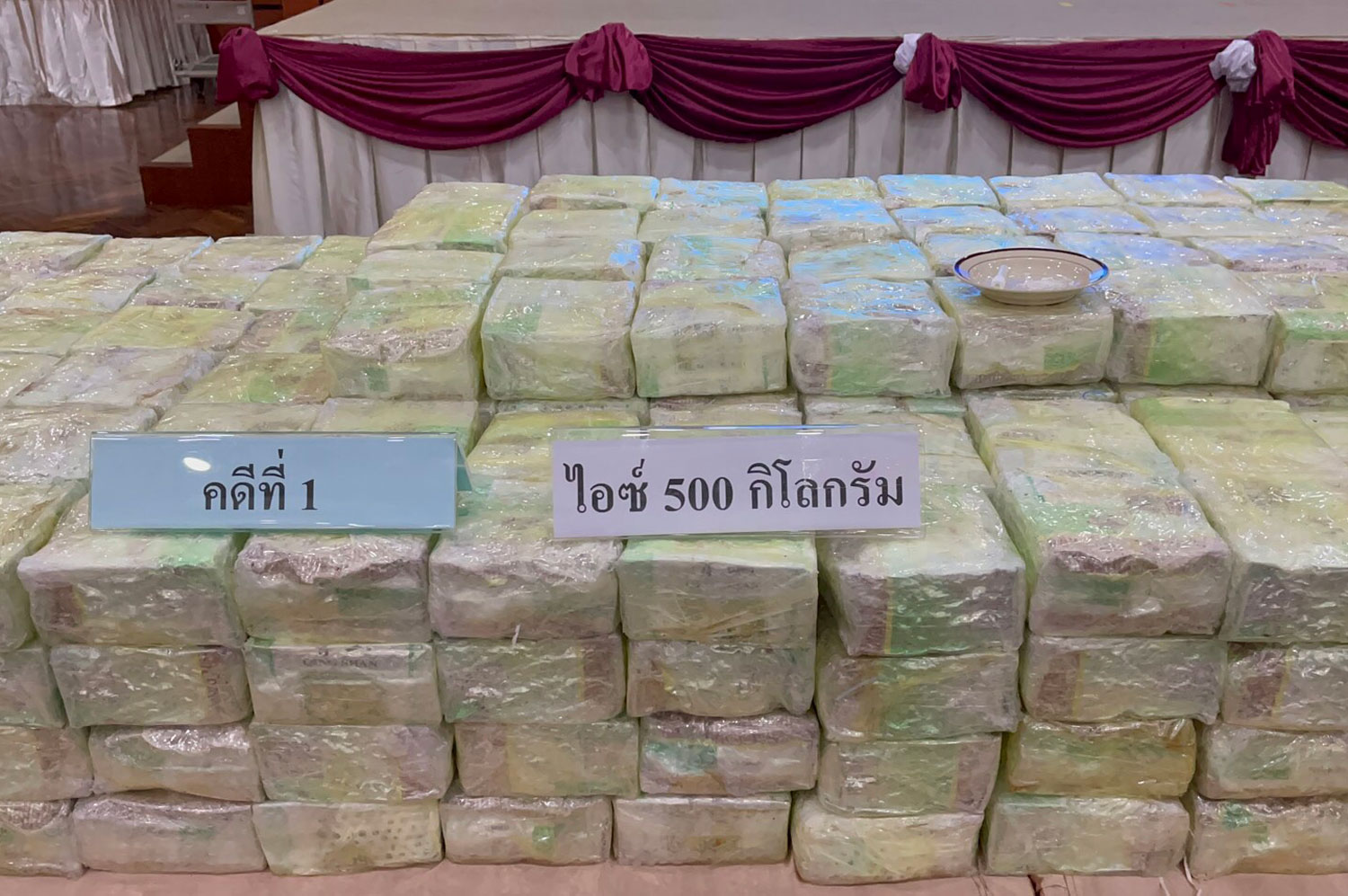 Packs of crystal methamphetamine, or "ya ice'', are displayed during a media briefing along with 4.2 million speed pills in two other drug cases. (Police photo via Wassayos Ngamkham)

In the second case, four suspects, one of whom was a woman, were apprehended with 200,000 speed pills. The gang had been caught after they smuggled the drugs from the North for delivering to an agent in the South, said police.

In the third case, three men were caught and 4 million speed pills seized from their car at a parking area at Talat Thai market in Khlong Luang district, Pathum Thani.

The trio — Supachok Suksud, 35, Wichai Inseewong, 40, and Pramuan Khankaew, 36 — confessed to have smuggled the speed pills from the North to deliver to an agent in Khlong Luang district.

Pol Maj Gen Manu said the investigation found that the four suspects involved in the smuggling of over 500kg of crystal methamphetamine were linked to a transnational drug network.

The suspects and other network members had previously smuggled drugs to Hong Kong, Australia and New Zealand, said the deputy national police chief.

Pol Lt Gen Montri said the United Nations had provided information that crystal methamphetamine smuggling was rampant during the Covid-19 pandemic and the drugs had been smuggled from five countries in Asia, including Thailand.

The NSB had worked closely with concerned agencies to crack down on those involved in drug trafficking and confiscate their assets Last year, police had managed to arrest a number of suspects in more than 200 drug cases, said the NSB chief.

Pol Lt Gen Montri added police had obtained information that showed links between those who made purchase of drugs from abroad and drug networks. Key evidence was money trails, said the NSB commissioner.

He added security agencies, the NSB and the Office of the Narcotics Control Board would charge them soon.