A diver shows part of the derelict fishing net that damaged the coral reef off Koh Losin in Pattani. (Photo: Royal Thai Navy)

Divers have removed a huge discarded fishing net that blanketed a large area of coral reef off the Pattani coast, and replanted the worst damaged area with young coral, the Royal Thai Navy announced on Monday.

Rear Admiral Pokkrong Monthatphalin, spokesman for the Thai Maritime Enforcement Command Centre, said divers reported the net covered 2.75 sq km of the reef off Koh Losin, and that 500 sq m of the reef was severely damaged.

Most of the damage was bleached reef, but there was also broken and scratched reef and damage to sea flowers and other marine life in the area, he said.

Koh Losin is an uninhabited islet about 70 kilometres offshore from Panare in Pattani.

A diver recently captured video of a massive fishing net caught in coral reefs off the north side of a small rocky island in the Gulf of Thailand. (Reuters video)

Forty-two divers from the Royal Thai Navy, Marine and Coastal Resources Department, and volunteer groups began a two-day mission to remove the net, assess and repair the damage on Saturday.

They left the islet on Sunday night and returned to Songkha naval base on Monday morning.

Department director-general Sopon Thongdee said 500 patches of reef had been replanted under the rehabilitation programme. A complaint would soon be filed with Pattani police, to identify the trawler that abandoned the derelict net. (continues below) 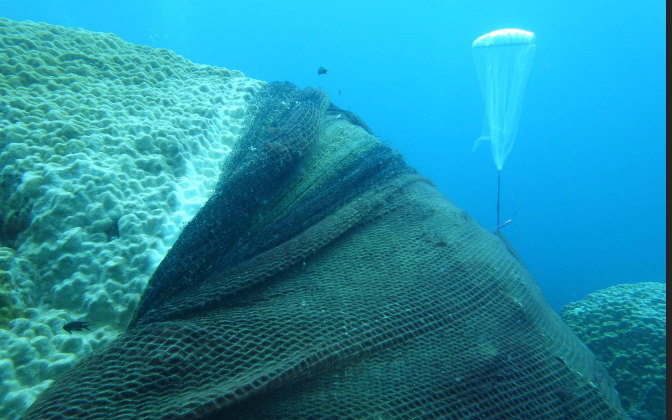 Adm Pokkrong said the net recovered from the reef would be examined for identifying  features, and all fishing boats that had passed Koh Losin since the beginning of the month could be subject to investigation.

Koh Losin is off-limits to boats using fishing nets. Violators are liable to fines of up to 100,000 baht and/or a year's  imprisonment under maritime fishing law. Causing damage to coral reefs also carries penalties of up 1 million baht and/or 10 years in prison under the Wildlife Conservation and Protection Act.

After some of the most dramatic declines in global financial markets since the Federal Reserve began lifting borrowing costs six months ago, authorities in Asia are stepping up efforts to prevent a downward spiral.