A total of 347 due to arrive on Thursday

A flight carrying first 23 passengers from Abu Dhabi is welcomed through the water tunnel as it touches down the Phuket airport on Thursday morning. (Phuket airport photo)

PHUKET: Twenty-three tourists arrived at Phuket airport on Thursday morning as the island reopened to vaccinated foreign tourists under the quarantine-free scheme.

Tourism makes up almost a fifth of the Thai economy, and the Covid-19 pandemic has led to its worst performance since the 1997 Asian financial crisis.

The country is pinning high hopes for a much-needed revival on the so-called "Phuket sandbox", a model that allows vaccinated travellers to visit without quarantine.

On Thursday, 347 passengers on flights from Israel, the United Arab Emirates, Qatar and Singapore landed on the island, where sandy beaches have been relatively deserted since the virus hit.

The EY430 flight on the Abu Dhabi-Phuket-Suvarnabhumi route arrived in the resort island at 10.20am with 44 passengers. Twenty-three disembarked in Phuket while the rest went on to Suvarnabhumi.

While on the island, the plane entered a "water tunnel" that authorities prepared to welcome the first group of tourists in a long while.

The first group of travellers then underwent screening procedures, which included fever and vaccination checks. All were required to download Thailand Plus and Mor Chana apps.

They later went through immigration and customs procedures before taking swab samples for RT-PCR testing.

Among them was Omar Ricalraeesi, 37, from the UAE who said he had previously been to the island 15 times and will spend eight days relaxing.

"After two years of not travelling, I've chosen the Phuket sandbox to change my mood," he told AFP.

Another British tourist said he would stay for a month and was looking forward to a family reunion.

"My children live here so I'm going to see my kids," he told AFP.

The other three flights to Phuket on Thursday were from Qatar with 136 passengers landing at 12.43pm, from Israel with 137 passengers at 1.52pm and from Singapore with 51 passengers at 4.14pm. All of them would stay in Phuket. 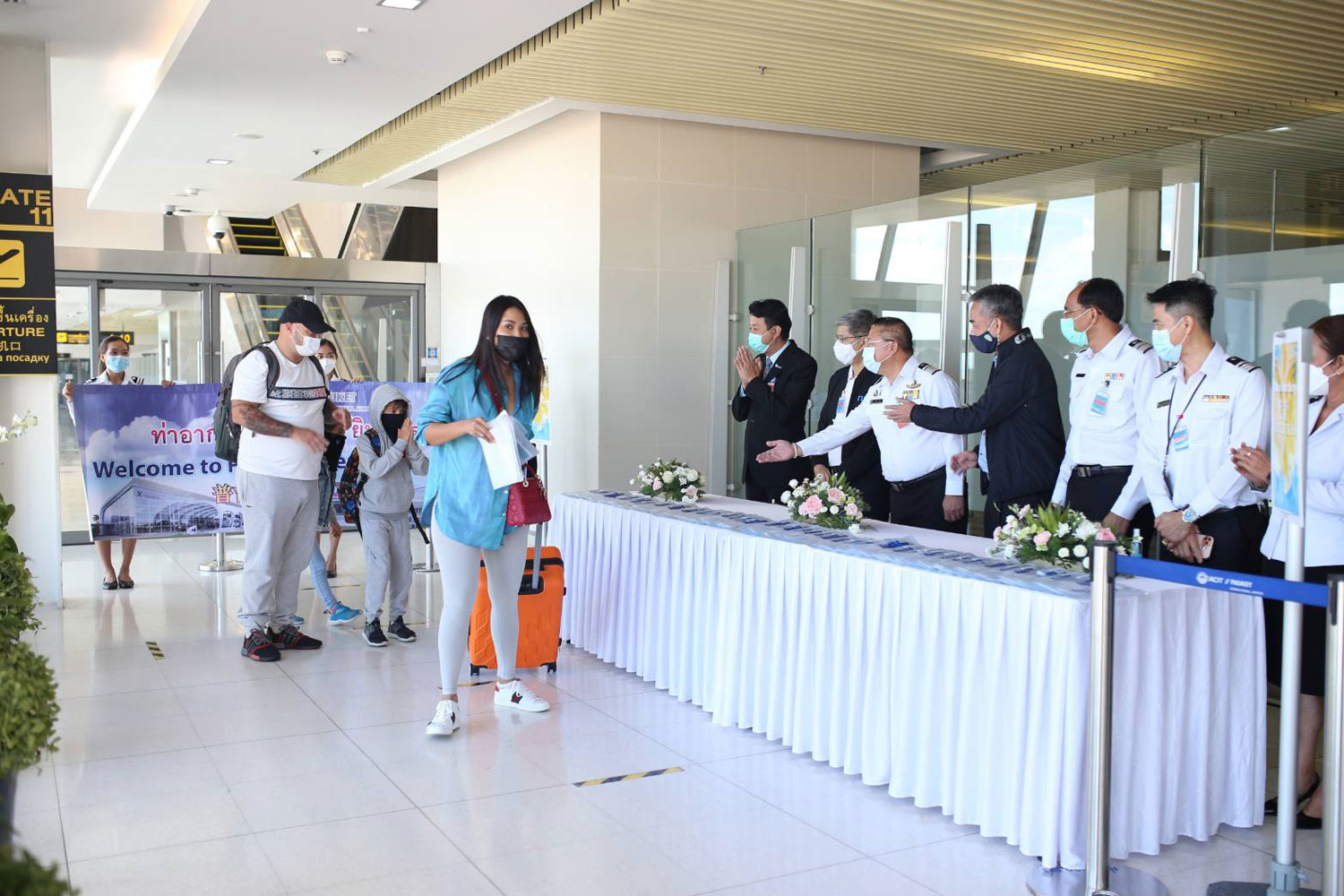 Passengers are welcomed at Phuket airport as they are among the first 23 tourists who arrived in the island province on the first day of the Phuket Tourism Sandbox scheme, which kicked off on Thursday. (Phuket airport photo)

Prime Minister Prayut Chan-o-cha, together with cabinet ministers and senior health officials, arrived to the resort island at 9.45am to meet officials and health volunteers there but he did not meet the tourists

"I'm very glad to meet you today. It’s a day we've been waiting for. As today is the starting day, everybody should support it. Everything depends on everyone. Many thanks for all officials for their hard work and sacrifice. Thank you all, doctors, nurses and health volunteers. You get what you do," Gen Prayut told them.

Gen Prayut then inspected the screening station at the airport before going to Royal Phuket City Hotel in Muang district to chair a follow-up meeting on the Phuket Sandbox scheme.

He was scheduled to meet the 51 tourists on the last flight from Singapore.

A total of 1,344 tourists have registered under the Phuket Sandbox scheme. The prime minister is due to welcome a group of tourists from Singapore this evening. He and his delegation will fly back to Bangkok at 6.40pm on Thursday.

The launch of the quarantine-free scheme comes as Thailand grapples with its worst-ever Covid-19 wave and the worrying detection of the Alpha and Delta coronavirus variants.

But Phuket remains relatively unscathed as Thai authorities have rolled out a mass vaccination campaign in preparation for the quarantine-free arrivals, with 70% of residents receiving at least one dose.

A command centre will track foreign visitors' movements via a mobile app, which tourists are required to install on arrival, and also monitor for potential outbreaks.

Despite the fanfare, tourism operators are lukewarm on the resuscitation of the island's economy, which has seen nearly 90% of hotels shutter.

Besides being fully vaccinated, tourists must remain in Phuket for a fortnight if they wish to travel to the rest of Thailand, and take three coronavirus tests during this period, a substantial expenditure for a family.

Mr Kongsak added that authorities had downgraded its sandbox entry forecast of 129,000 visitors in the third quarter to 100,000.

Delays in government approval for the scheme have caused headaches for scores of prospective travellers, who flocked online to air their grievances.

"It is disappointing the communication has been so poor and new requirements without any detail are being created after the fact," an American traveller told AFP.

She added she had spent hours calling consulates across the United States to get her paperwork processed, to no avail.

But even a trickle of visitors will be a lifeline for desperate vendors such as Thewan Phromyang, who rents out deck chairs at Phuket's Patong Beach.

"I barely have any income. We can only feed ourselves," the 49-year-old told AFP.

Before the pandemic, Thailand had expected 40 million visitors to arrive in 2020, a far cry from the 6.7 million who made it through strict border restrictions.

Another regional tourist hotspot, Bali, had been eyeing a July reopening but Indonesian authorities appeared to have backed down as virus cases surged to record levels.

While the Indonesian government has not announced an official cancellation, comments this week from the tourism minister suggested that any bid to welcome back tourists is likely to be delayed until infections are curbed.

Video by the Tourism Authority of Thailand