The ruins of the Ming Dih Chemical Co factory in Bang Phli district of Samut Prakan on Tuesday, after the fire was doused. (Rescue foundations photo)

SAMUT PRAKAN: The fire that had raged through a plastics factory in Bang Phli district since early Monday has been brought under control, but intermittent flare-ups continued through Tuesday morning. 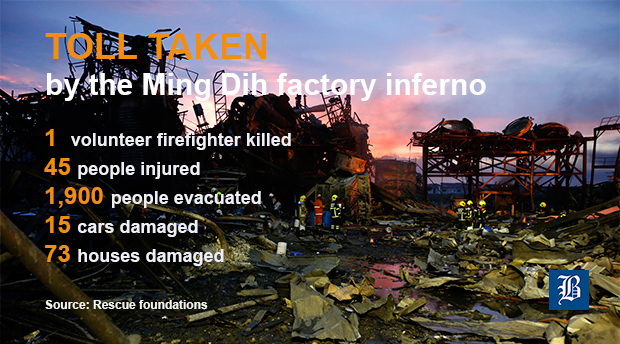 Rescures said on Tuesday the fire was declared under control about 5am, more than 24 hours after a huge explosion started the blaze at the factory in Soi King Kaew 21.

The inferno razed the factory. One firefighter was caught in a surge of flames from a store of chemicals and killed. Another 12 volunteer firefighters and 33 other people were injured. The explosion and fire also damaged 73 houses and 15 cars in the surrounding community.

About 1,900 residents of houses within a five-kilometre radius were evacuated on Monday to eight temporary shelters. They were warned the smoke and fumes were toxic. On Tuesday morning, officials said it was still not safe for them to return home.

They told reporters the fire was under control after specialist technicians from the PTT OR Plc facility in Si Racha, Chon Buri, were able to close the valves of three remaining tanks of chemicals in the factory complex.

However, about half an hour after midnight the simmering fire erupted again, and firemen resumed spray water and chemical foam on the burning wreckage.