Olympic gold medallist Panipak Wongpattanakit prostrates in front of her father in Phuket as she arrives home following her win in Tokyo. Left  Panipak shows off her gold medal as she waves from a Phuket bus.  Photos by Phuket public relations office

PHUKET: Olympic gold medalist Panipak Wongpattanakit, the first Thai to win gold at the Tokyo Games, returned home yesterday to a warm welcome plus the promise of almost 20 million baht for her victory.

Panipak arrived in Phuket from Tokyo on a Singapore Airlines flight under the province's sandbox programme along with national coach Choi Young-Seok and the Thai Taekwondo team.

After going through Covid-19 control protocols, the Taekwondo star emerged to be greeted by her father, Mr Sirichai. Among others there to congratulate her were Phuket governor Narong Wunsiew and Taekwondo Association of Thailand President Pimol Srivikorn.

The 23-year-old, who claimed the country's first gold medal in Taekwondo, bowed to thank her father and gave him the medal. She also paid respect to the coach, her team and the association president.

Panipak said she was overwhelmed by the support she had received, adding that it was the best day of her life. She and the team also received flowers and a message of support from Her Royal Highness Princess Sirivannavari Nariratana Rajakanya.

The Surat Thani native thanked the public in the southern dialect and said the gold medal was for everyone.

Panipak said her goal is to continue with the sport but she will take things step by step. She also has her eyes set on the Paris 2024 Olympic Games.

"I want to do the best in every competition. I want to be in the next Olympics in Paris, if I'm physically fit," she said. 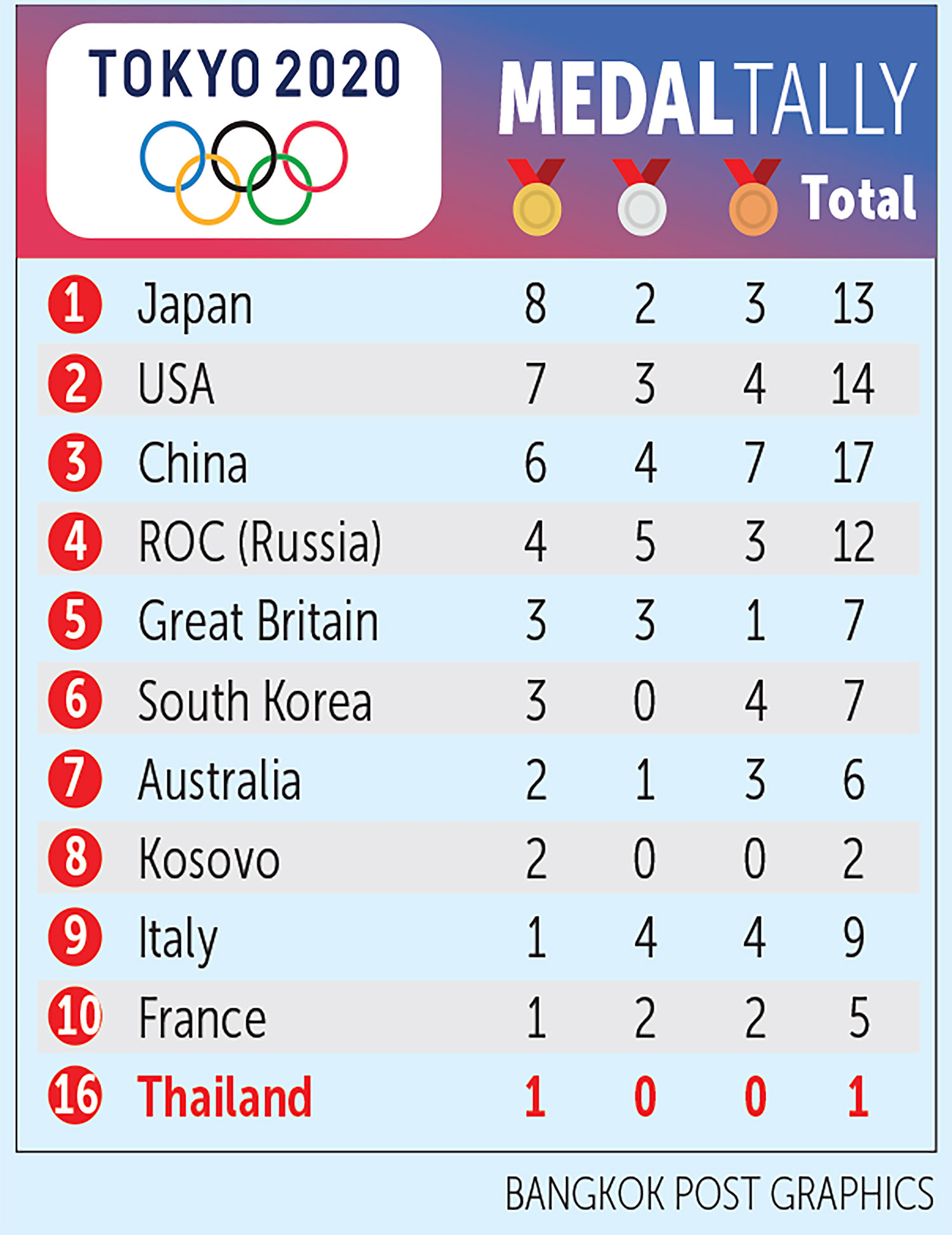 Panipak will have to spend at least 14 days in Phuket before she is allowed to travel to other provinces.

"The very first thing I want to do in Phuket is enjoy good food -- seafood, cookies, cake, grilled meat and a lot more," she said.

Mr Sirichai said he was grateful for the support given by Thai people and he was glad his daughter had brought them happiness. He said his daughter's victory was for all Thais.

National coach Choi Young-Seok said he had been in Thailand for almost 20 years and he felt great joy in helping Thailand win gold.

Tourism and Sports Minister Phiphat Ratchakitprakarn said Panipak and her companions were invited to Phuket so they could avoid quarantine in a hotel room.

Under the sandbox programme, those fully vaccinated who arrive in Phuket must remain in the province for at least 14 days before they can travel to other provinces.

Gongsak Yodmani, governor of Sports Authority of Thailand, said the National Sports Development Fund was ready to reward Panipak with 10 million baht if she wanted it outright, or 12 million baht if she preferred it in instalments. He said other organisations had also donated nearly 20 million baht to her and her team. 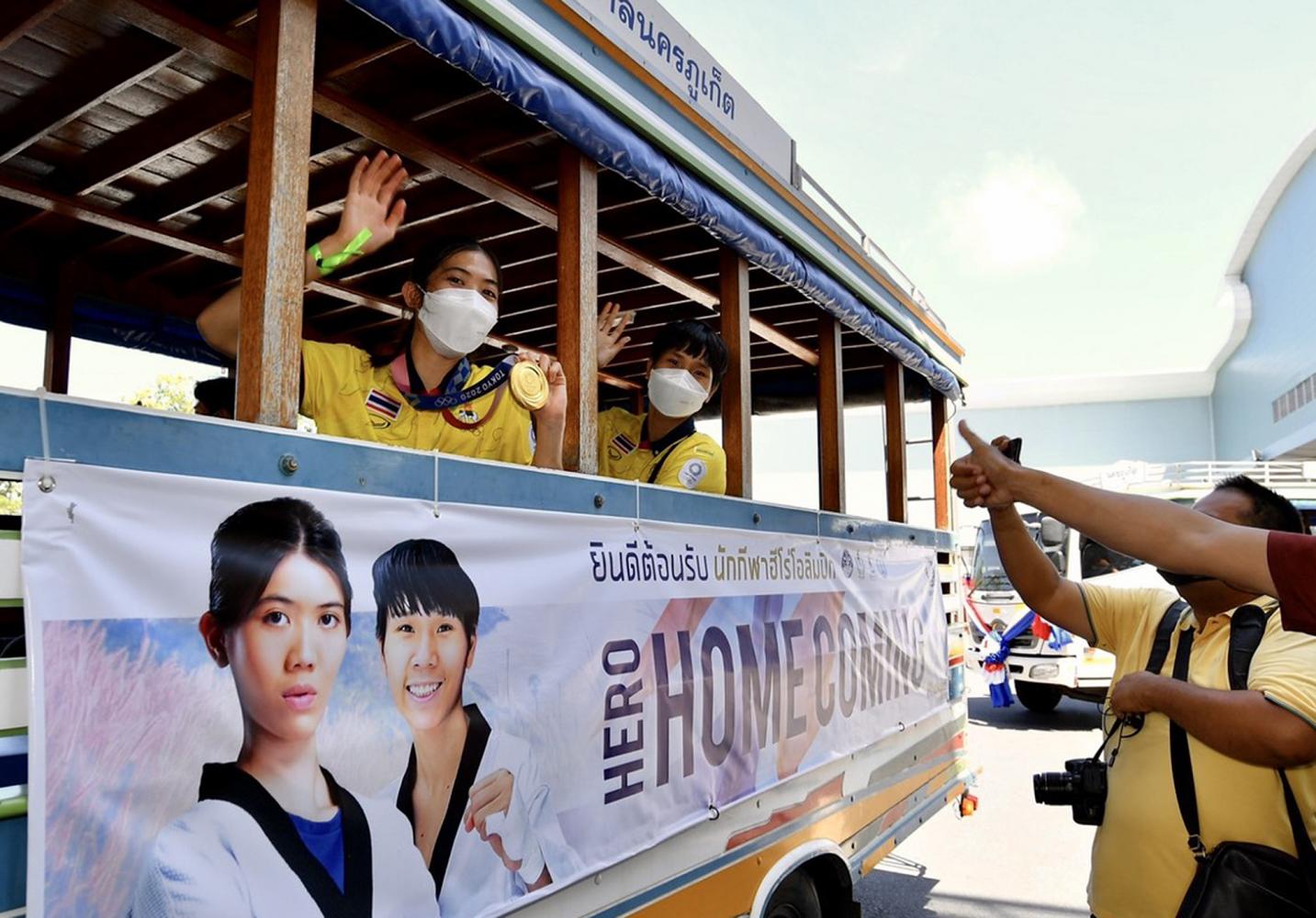 Olympic gold medallist Panipak Wongpattanakit prostrates in front of her father in Phuket as she arrives home following her win in Tokyo. Left  Panipak shows off her gold medal as she waves from a Phuket bus.  Photos by Phuket public relations office