Half of US Pfizer doses for frontliners
Thailand
General

A shipment of 1.54 million doses of Pfizer mRNA vaccines donated by the United States arrives at Suvarnabhumi airport yesterday morning in an AeroLogic cargo aircraft. The vaccines must be kept in ultracold storage to preserve their efficacy. (Photo by the US Embassy in Bangkok)

Almost half of the 1.54 million doses of Pfizer vaccines donated by the United States will be allocated as a booster for 700,000 frontline medical staff countrywide.

The vaccines, which arrived in Thailand yesterday, will be administered to health workers starting next week, either Thursday or Friday.

The jabs will also be provided for other target groups from Aug 9, according to the Department of Disease Control.

All of the 1.54 million doses arrived at Suvarnabhumi airport yesterday morning. Deputy Prime Minister and Public Health Minister Anutin Charnvirakul and senior health officials were at the airport to accept the delivery. 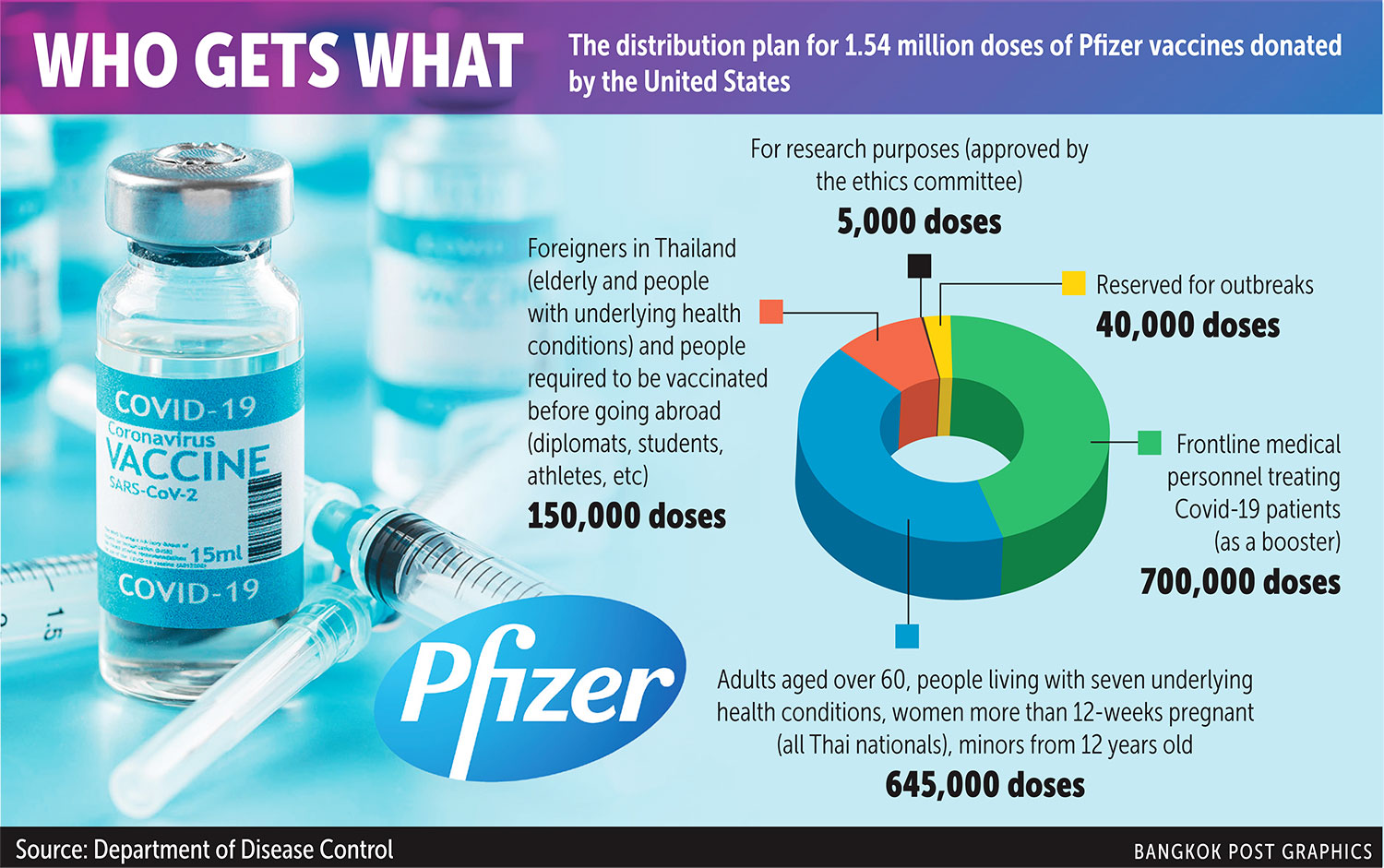 The shipment arrived on flight 3S530 of AeroLogic airlines in refrigerated containers.

Dr Opas Karnkawinpong, chief of the Department of Disease Control, said besides the 700,000 vaccine doses for the health workers, 645,000 doses will be allocated to the elderly and patients with seven underlying conditions, minors from 12 years old, and women who are 12 or more weeks pregnant.

Michael Heath, charge d'affaires at the US embassy, said the donation comes with no conditions attached, while adding the distribution of the vaccine is the responsibility of the Thai government.

He confirmed a recent statement made by Senator Tammy Duckworth who said that the US would donate an additional 1 million doses, which in total is 2.5 million vaccines from the US.

The brand and shipment date of those jabs have yet to be confirmed.

"I would like to support that the vaccine should be made available to all people in Thailand no matter what nationality," he said, adding that both Thais and foreign residents can transmit the virus.

Meanwhile, Dr Kiattiphum Wongrajit, permanent secretary of the Ministry of Public Health, said that the ministry has planned to allocate 10 million vaccine doses for next month.

He said that they will be able to put more focus on other provinces after Bangkok has achieved vaccination of 61.67% of its population.

Only 18.36% of Thailand's population has been vaccinated.

Liquor sales will be banned from 6pm on Saturday until 6pm on Sunday in Bangkok and Pattaya due to the Bangkok gubernatorial and Pattaya mayor elections.

Nation asks US to cut it from trade watch list

Thailand has asked the United States to remove the country from its trade watch list this year, a request made during bilateral talks on the sidelines of this year's Apec Ministers Responsible for Trade (MRT) meeting in Bangkok.