As Covid cases surge, some monks are donning PPE over their distinctive robes, delivering oxygen cylinders, taking nasal samples to help with testing, and even helping carry the dead to the crematoriums.

The country is struggling to contain its latest outbreak fuelled by the highly contagious Delta variant, leaving healthcare services stretched and further damaging a battered economy.

"There are a lot of Thais who are still ignored by the public health system," Phra Mahapromphong, 33, the deputy abbot of Suthi Wararam Temple in the Thai capital, told AFP.

"We take care of everyone we come across."

Since July 21 he has been working in Bangkok's poorer neighbourhoods, distributing oxygen tanks, food and medical supplies to the needy as well as taking samples for testing.

They were inundated with donations once word got out, he adds.

He learned how to do nasal swabs from the doctors and nurses working in his temple, which doubles as an isolation centre for those infected with the virus.

One man winced as Phra Mahapromphong removed the swab and deposited the sample in a plastic pot.

"It's better to be safe than sorry," the man said, his eyes watering.

"Monks are able to live because we rely on people's donations," Phra Mahapromphong told AFP.

"So it's time for us to give back to the people. At the very least, we could encourage them to keep fighting."

Phra Supornchaithammo, a monk at Chin Wararam Worawiharn Temple, helps with the grimmer task of taking the bodies to the crematorium.

"I'm willing to take the risk here," he said. "If I contract the virus then I'm ready to accept it without any regret." 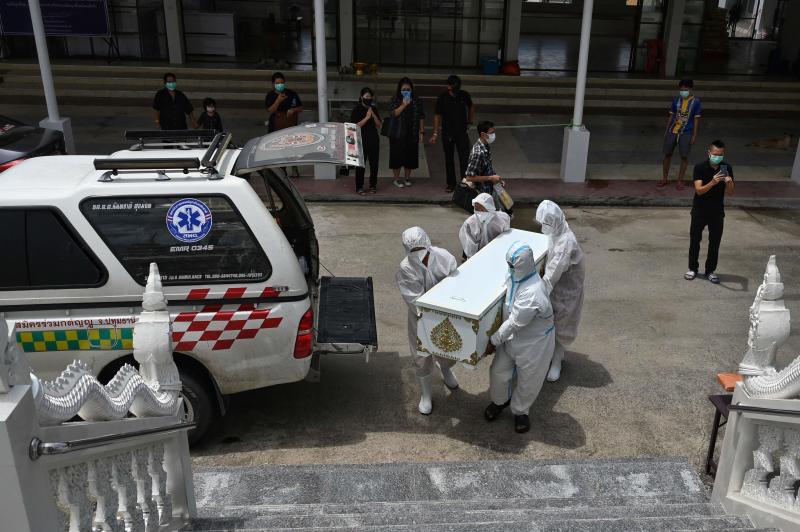 The family of Malee Manjeen, 79, who passed away earlier in the day due to Covid-19, watch from a distance as monks in personal protective equipment carry her coffin to the crematorium at Wat Chin Wararam Worawihan in Bangkok on Friday.

- 'Everybody needs a helping hand' -

Thailand has reported over 597,000 coronavirus cases and more than 4,800 deaths.

The bulk of the new infections were detected since April, when the latest wave was sparked by a cluster at an upscale Bangkok nightlife district frequented by the politically connected.

Premier Prayut Chan-o-cha's administration has been roundly criticised for its handling of the pandemic, from accusations of vaccine mismanagement to the lack of government compensation for affected sectors.

Phra Supornchaithammo says he never expected this to be his routine, but is happy to help.

"I didn't have it in my head that I would be doing something like this when I was ordained," he told AFP.

"But with a situation like this, everybody needs a helping hand and I'm proud to be here."