The government has expressed sorrow over the murder of a Swiss government official in Phuket as police investigators ramped up their efforts to catch her killer. 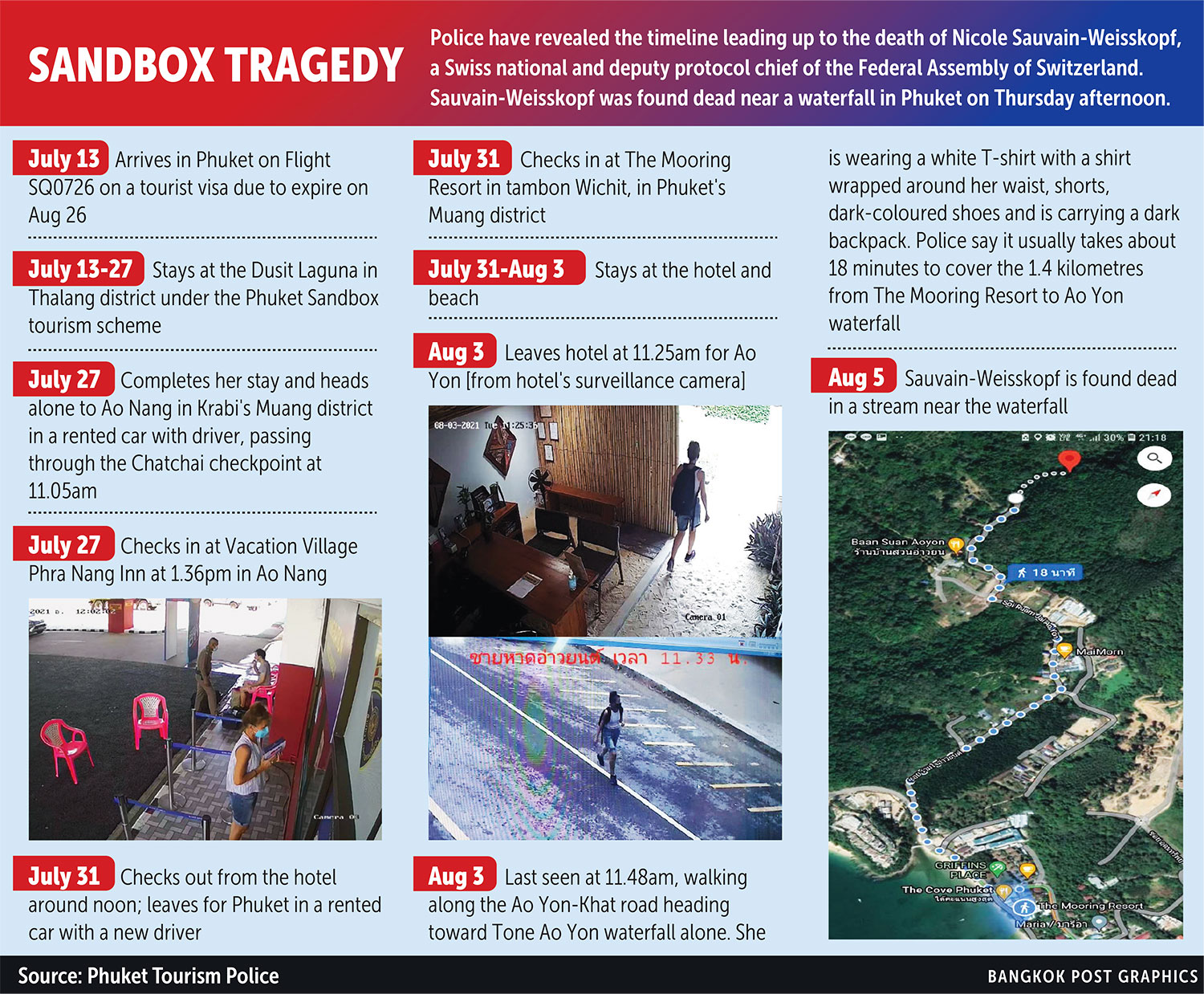 Nicole Sauvain-Weisskopf, the 57-year-old deputy protocol chief of the Federal Assembly of Switzerland, was found dead wearing only a T-shirt and jacket at Tone Ao Yon waterfall in tambon Vichit of Muang district in Phuket on Thursday afternoon.

The woman had arrived at Phuket airport on July 13 as a tourist under the Phuket Sandbox scheme, which began on July 1.

Andrea Kotas Tammathin, the Swiss Honorary Consul in Phuket, said she was shocked by the murder.

Foreigners normally visit Thailand on the understanding it was a safe country.

"I feel very sad and have great sympathy for the woman who arrived as a tourist and died because of the actions of a bad person. I call on police to arrest the culprit as soon as possible," Ms Tammathin said.

"The prime minister instructed agencies involved to investigate and arrest the culprit as quickly as possible," Mr Anucha said.

Mr Don phoned the Swiss ambassador to Thailand to express his sympathy directly, according to Tanee Sangrat, spokesman for the Foreign Ministry.

"On behalf of Phuket province and the people of Phuket, I would like to express deep and sincere condolences to the family and friends of Ms Nicole and to the Swiss Confederation," the governor said.

Meanwhile, Pol Lt Gen Kitrat Phanphet, commander of Provincial Police Region 8, said that some of the people police are looking at in their investigation are migrants and ex-prisoners in the island province.

Police are working to determine whether the Swiss woman was killed elsewhere and her body dumped, or whether she was killed at the crime scene.

National police chief Pol Gen Suwat Jangyodsuk flew to Phuket on Friday with a large team of experienced detectives and forensic experts from Bangkok to head the investigation.

"Based on an initial investigation, police believe it was murder," he said.

He was waiting for the official autopsy report to determine how she died.

However, the Institute of Forensic Medicine of the Royal Thai Police will do another autopsy.

"Many things have yet to be done. In a murder case, DNA, blood and bodily fluids must be sent to Bangkok to find the cause of death as soon as possible," the doctor said.

The death of the Swiss woman has shaken tourist confidence and affected the Phuket sandbox scheme, says the Tourism and Sports Ministry.

Tourism and Sports Minister Phiphat Ratchakitprakarn said that the ministry has a fund to compensate foreign visitors who have accidents or die in Thailand, with compensation of up to 1 million baht each.

Sauvain-Weisskopf was found dead among rocks about one kilometre from the entrance to the Ao Yon waterfall in tambon Vichit on Thursday afternoon by Natthapong Seedam, 31, a local resident.

The Swiss woman's body was found under the water covered with a black sheet, with her feet sticking out of the water.

Editorial: The shame of Thai tourism