Police crack down on protesters

Demonstrators react to tear gas during a clash with police in Bangkok's Din Daeng area on Saturday. (Photo by Wichan Charoenkiartpakun)

Police fired tear gas, rubber bullets and water cannon on anti-government protesters on Saturday, the culmination of a running battle in which demonstrators were forced to change their destination three times.

Redem demonstrators had arranged originally to meet at Democracy Monument at 2pm on Saturday, with a plan to march to the Grand Palace.

Redem (Restart Democracy) has no official leaders but still has guards. Created by the Free Youth group in February, it can consist of different pro-democracy groups that share common goals at any given time.

The group on Saturday was looking to push three demands — Gen Prayut Chan-o-cha must unconditionally resign as prime minister, the budgets for the palace and armed forces must be cut and allocated to Covid-19 relief efforts, and the "tycoon" Covid-19 vaccine must be changed to the mRNA type.

A few hundred people arrived at Democracy Monument around noon. Police closed the area to traffic at 12.20pm and told them to disperse. In front of the Grand Palace nearby, the usual wall of containers was seen, fortified this time with decommissioned tanker cars obtained from the State Railway of Thailand.

At 1pm, police started clearing the area. Rubber bullets were reportedly used and at least two people were arrested.

The demonstrators were pushed back to the Phan Fa Bridge. Some threw firecrackers and fired catapults at the police.

Free Youth then posted on Facebook that the destination was being changed to Government House. As container walls were also set up there, a loudspeaker truck announced another change of destination to Victory Monument, with a planned march to the 11th Infantry Regiment, where Prime Minister Prayut resides.

As the demonstrators arrived at Victory Monument and were heading for Vibhavadi Road, which leads to the army base, police blocked traffic using stacked containers and barbed wire, with crowd control police lining up behind the barriers.

Police told them to go back to Victory Monument.

As some of the protesters tried to remove the containers, several tear gas canisters were fired at them at Din Daeng intersection at 3.30pm.

Police said they would use rubber bullets if the protesters still tried to move forward.

At 5.30pm, police pushed them further back to Victory Monument using water cannon. Video taken at the scene also showed tear gas and muzzle flashes — possibly from firing of rubber bullets — being used by officers positioned on the skywalk overlooking the roundabout.

Free Youth called off the rally around 5.30 but sporadic clashes were continuing into the evening between small groups of protesters and police. The Victory Monument BTS station was temporarily closed as the police operation continued.

Dozens of protesters were seen being carried away on motorcycles and in ambulances. The Erawan Emergency Medical Centre said at least two civilians and three officers had been injured. 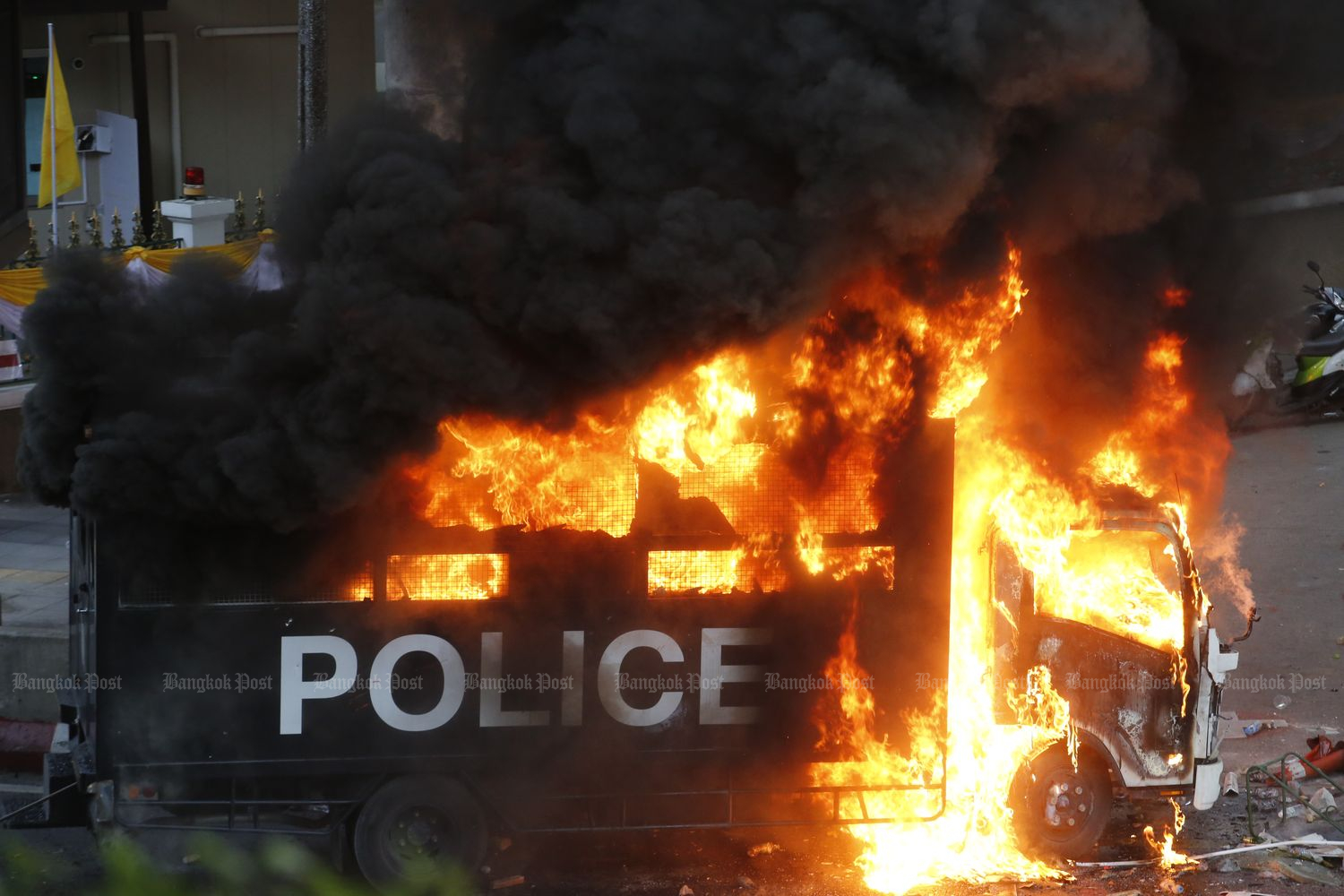 A police detention van is burned at the Din Daeng clash site. (Photo by Wichan Charoenkiartpakun)