Lockdown to last until Aug 31

Tests to be ramped up to flatten curve

The government has decided to extend lockdown measures until the end of the month in the face of rising Covid-19 infections, but banks and financial institutions located in department stores will be allowed to reopen, said government spokesman Anucha Burapachaisri on Monday. 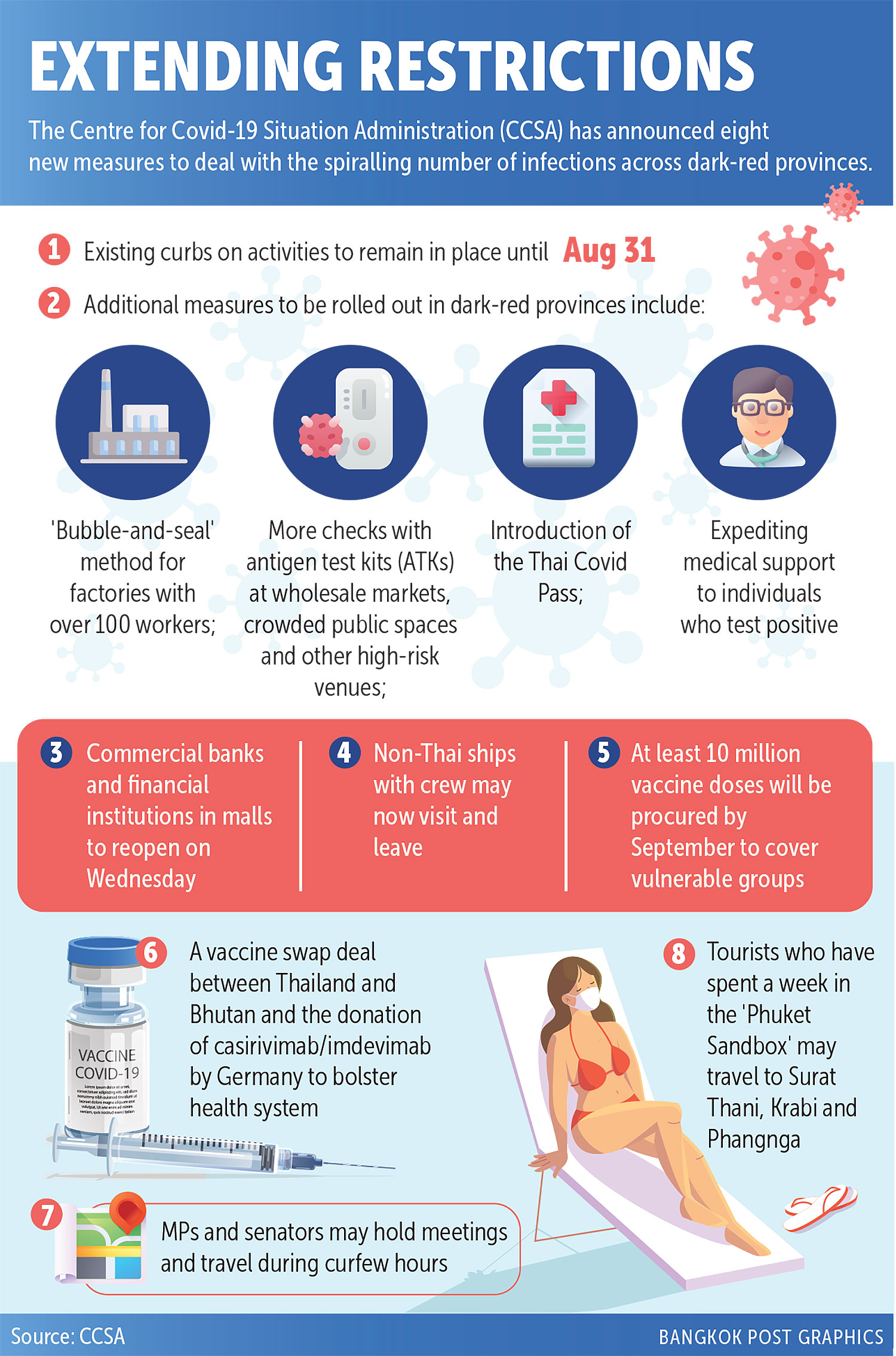 Restrictions that were put in place to contain the spread of Covid-19 Bangkok and 28 other "dark-red" provinces last month were going to expire tomorrow. With the extension, everyone living in high-risk provinces will be required to abide by the 9pm and 4am curfew until the end of the month, Mr Anucha said.

Starting tomorrow, however, banks and financial institutions in malls will be allowed allowed to resume operations, he said.

In order to help flatten the infection curve, the government will also ramp up public testing, especially at businesses which employ more than 50 workers.

"While most state and private employees will still be required to work from home whenever possible, workplaces whose workers still need to physically show up are encouraged to ramp up testing," Mr Anucha said.

He went on to say that wider use of antigen test kits (ATK) among the public will be promoted and relevant agencies will begin work on the "Thai Covid Pass" in preparation for the country's reopening.

The CCSA also approved the "7+7" tourism scheme, in which tourists who have already spent seven days in under the "Phuket Sandbox" programme will be allowed to travel to Surat Thani, Krabi and Phangnga.

According to Mr Anucha, the CCSA has inked a vaccine swap deal with Bhutan and agreed to accept monoclonal antibody medications from Germany to treating critically-ill Covid-19 patients.

"The government remains committed to vaccinating as many people in vulnerable groups as possible -- at least 80% in Bangkok, 70% in 12 high-risk provinces, and at least 50% in other areas," he said.

"Gen Prayut said all patients must be provided with proper medical care, so the home isolation and community isolation programme should expanded to cover all areas."

The "bubble-and-seal" method will also be implemented at more factories, he said.

The premier also set up a communication centre to improve information flow during the pandemic, Mr Anucha said. The centre will be headed by Anucha Nakasai, PM's Office Minister, with communication experts Seree Wongmontha and Kasemsan Veerakul on board as strategists.

There were 20,499 infections found in the general population, while 658 were found among prisoners -- marking the sixth consecutive day in which new cases exceeded 21,000.

That said, 20,984 Covid-19 patients were discharged from hospitals on Sunday, almost matching the number of new infections.