Saiyok Floatel on the Kwai Noi River in Sai Yok district before it is removed due to encroachment on Sai Yok National Park. (Photo: Saiyok Floatel Facebook page)

KANCHANABURI: A popular and highly rated hotel built on a scenic river is removing all floating structures after they were found to be encroaching on a national park - a move that will sink the business.

Saiyok Floatel is on a forested curve of the Kwae Noi River in Sai Yok district.

The management is hauling away its floating rooms, piers and other structures to an undisclosed location, after it was ordered by Sai Yok National Park to remove them within 30 days.

The clock began ticking down on Aug 6, when park officials posted a demolition order at the resort.

The park ordered the 20-million-baht resort's removal after winning a ruling by the Central Administrative Court that it trespassed on the national park. Resort owner Wasant Sodsai did not appeal the judgement.

The resort has been a drawcard for foreign and local holidaymakers alike since its opening in 1995, with its rooms and other facilities floating on the river.

Mr Wasant said at his resort on Thursday that almost all the structures would be removed before the deadline and the site returned to the park.

The floatel has a message on Facebook announcing its closure since Aug 6 and thanking all former guests. (continues below) 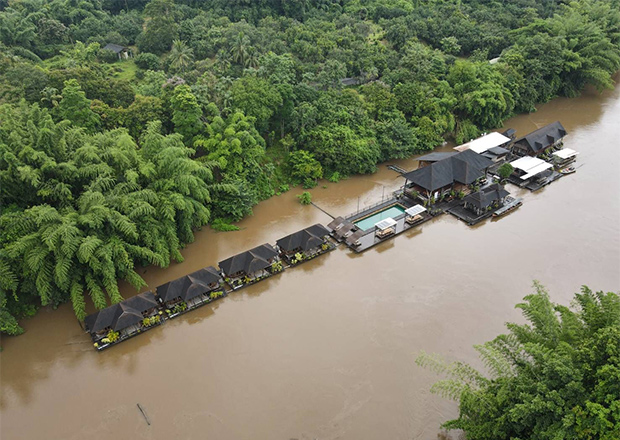 An aerial view of Saiyok Floatel before it was dismantled. (Photo: Piyarat Chongcharoen)

He warned that other resorts encroaching on and damaging Sai Yok and other national parks would also be targetted, although prosecutors had decided not to take them to court.

That was the case with Saiyok Floatel.

The park had earlier filed criminal charges against Mr Wasant with police, but prosecutors in Kanchanaburi decided in August 2018 not to indict him. They accepted that he not intended  to encroach on public land.