The former police chief of Muang district in Nakhon Sawan and six other suspects in the fatal torture of a drug suspect were transferred from Phitsanulok prison to Bangkok's Klong Prem Prison on Friday.

Pol Col Thitisan Utthanaphon, the prime suspect, and the six other detained police officers  left Phitsanulok at 5am in a convoy heavily guarded by commandos of the Crime Suppression Division (CSD) and reached Klong Prem shortly before 10am.

The move to the Bangkok prison completed the transfer request made on Wednesday to facilitate the investigation, which has been transferred to the CSD, taking it out of the hands of police in Nakhon Sawan, where the crime occurred.

The Corrections Department had planned to detain them at Bangkok Remand Prison, but an outbreak of Covid-19 there led to them being sent to Klong Prem.

Pol Maj Gen Jirabhop Bhuridej, deputy commissioner of Central Investigation Bureau, said the seven men were interrogated again on Thursday night at the Phitsanulok prison via video conference from Bangkok. They confirmed their denials of the accusations.

Pol Col Thitisan, 39, and his subordinates in the drug-busting team at Muang police station in Nakhon Sawan are accused of the murder of drug suspect Jeerapong Thanapat and multiple other related charges.

Jeerapong and his wife were arrested by the team on Aug 4 and his head was covered with six plastic bags during interrogation by Pol Col Thitisan and his men. He was declared dead of suffocation by Sawanpracharak Hospital on Aug 6. (continues below)

The cruel torment of Jeerapong stirred a public outcry after video from a surveillance camera  went viral on social media.

Pol Maj Gen Jirabhop said the CSD would apply to the Criminal Court for Corruption and Misconduct Cases on Monday to detain the suspects for another 12 days while the  investigation continued.

Deputy national police chief Pol Gen Suchart Teerasawat, the chief investigator in the case, is due to meet with detectives on Monday, and then submit the case to the National Anti-Corruption Commission on Tuesday.

The anti-graft office will decide whether the suspects abused their authority, and also look into the source of the sacked police station chief's obvious wealth, based on documents filed by the police. 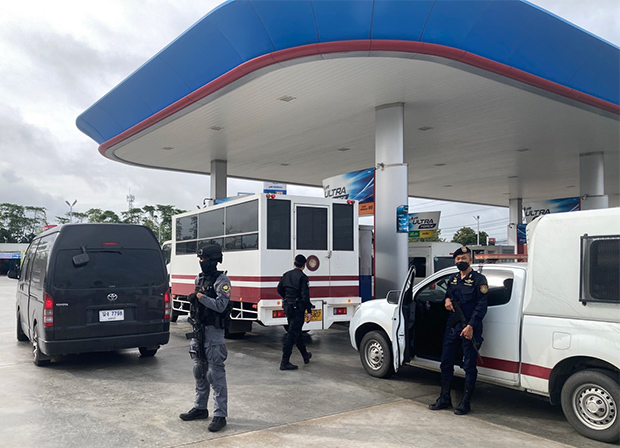