A monk paddled a small boat through water that ranged from thigh deep to neck level at Wat Satue in Ayutthaya on Wednesday. (Reuters photo)

Tropical storms Lionrock and Kompasu are expected to hit Thailand between Monday and Wednesday, which may affect the Northeast and Central regions, according to the National Water Command Centre.

Surasee Kittimonthon, secretary-general of the Office of the National Water Resources, said the Thai Meteorological Department (TMD) found the first round of a low-pressure area has the tendency to become a tropical storm because of the influence of high air pressure. The second round of a storm may be worse.

Mr Surasee, who is also deputy director of the National Water Command Centre, said the centre will closely monitor the situation as the storms might cause heavy showers in the Northeast and Central regions. 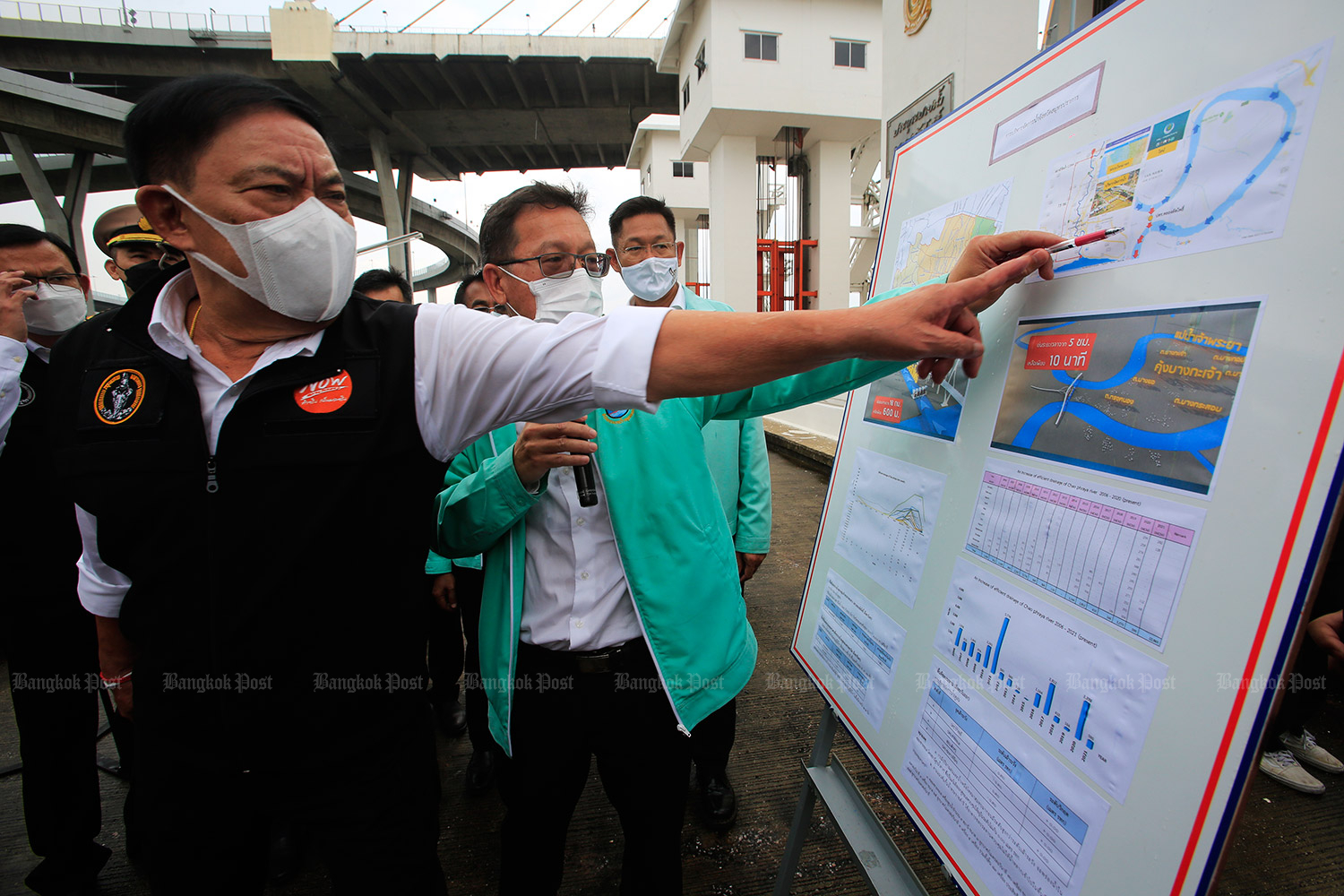 Man with a plan: Bangkok governor Pol Gen Aswin Kwanmuang inspects flood drainage preparations at the Khlong Lat Pho floodgate in Samut Prakan as the navy prepares to supply water-propelling boats to speed up drainage of water into the sea. (Photo: Pornprom Satrabhaya)

Sutat Weesakul, director of the Hydro-Informatics Institute, said the weather predictions of the Weather Research and Forecasting (WRF) and Regional Ocean Modelling System showed the first storm is in the South China Sea, while the second one is in the Pacific Ocean near the Philippines.

Although the storms will not hit Thailand directly, more rain is expected in the western and upper part of the South and lower Central regions, the upper Northeast and upper North. On the other hand, they would also help to replenish water in the Bhumibol and Sirikit dams.

The worst-hit provinces may be Ranong, Phangnga and Phuket, Mr Sutat added.

Meanwhile, the Department of Disaster Prevention and Mitigation has warned 14 Central region provinces, the East and the South to brace for flash floods and landslides due to excess water released from dams until Sunday.

The disaster prevention department also warned about water overflow risks around the Phetchaburi River in Phetchaburi province, the Tapi River in Surat Thani, the Lamtaphoen and Phu Takhian dams in Kanchanaburi, the Huai Mahat Dam in Ratchaburi, the Huai Sai Ngam Dam in Prachuap Khiri Khan and the Khlong Ya and Khlong Haeng dams in Krabi.

Bangkok governor Aswin Kwanmuang said the Bangkok Metropolitan Administration is working with the water resource management subcommittee to push more water from the Chao Phraya River into the Gulf of Thailand as the flow rate of the water would be reduced because of inflows of seawater until Sunday.