Explosive Ordnance Disposal Unit police collect a homemade bomb at the Din Daeng flats after the clash on Wednesday night.

A riot police officer is in critical condition after he was found shot in the head on Wednesday night following a protest near the Din Daeng flats in Bangkok.

His Majesty the King has accepted the officer as a patient under royal patronage.

The officer was identified as Pol L/Cpl Detwit Ledtenson. He was shot at about 10.43pm behind Din Daeng Flat 1 on Chaturathit Road, also known as Soi Saeng Uthaithip, and rushed to Police General Hospital.

On Wednesday night, pro-democracy protesters rallied near the Din Daeng expressway and threw firecrackers at riot police before the officers moved in to disperse them. A total of 28 people were arrested during the clash.

Police suspect that some pro-democracy protesters in the area at the time might have been involved in the shooting of Pol L/Cpl Detwit. 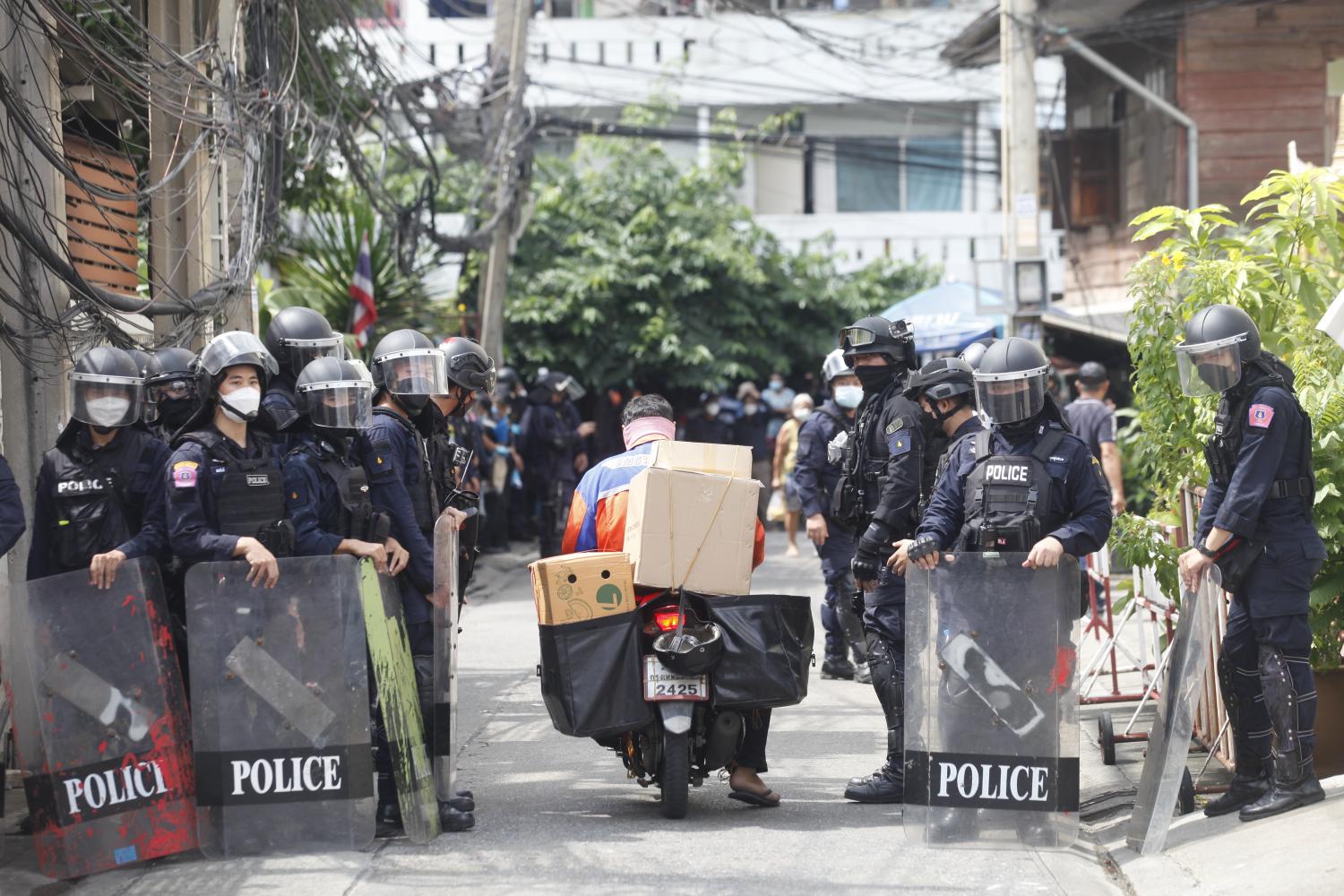 Pol Maj Gen Jirasan said national police chief Gen Suwat Jangyodsuk was concerned about the safety of residents and passersby because protesters used real firearms, and some were found disguised as nurses while attacking police officers.

The rally was not a peaceful gathering but a crime, he said.

Pol Lt Gen Samran Nuanma, commissioner of the MPB, ordered the police to hunt for suspects at the flats. A total of 13 more people were arrested, including minors and a journalist. They were taken to Phahonyothin police station.

Police were also searching for suspects inside the flats.

Pol Col Sirikul Kritpitayaboon, deputy spokeswoman for the national police, said the wounded officer was operated on but had not yet regained consciousness, noting he needed a ventilator to breathe.

Move Forward Party MPs Rangsiman Rome, Wiroj Lakkhanaadisorn, and Chaithawat Tulathon have spoken with the arrested minors, noting they are aged 11 and 13. The MPs said their parents were allowed to pick them up.

A witness who lives close to the expressway said protesters should avoid gathering and causing unrest in the community because they frighten residents.

Mr Thanakorn said the rally was not a peaceful one but an event aimed at destroying state property by using weapons.