All is quiet in Bangkok’s Soi Cowboy ahead of the Nov 1 reopening. Bangkok is now designated a new tourist-oriented area with few Covid-19 restrictions along with Krabi, Phangnga and Phuket, starting Monday. (Photo: Pornprom Satrabhaya)

Alcoholic drinks will be allowed to be served in restaurants and eateries in Bangkok, Krabi, Phangnga, and Phuket when the country reopens on Monday.

However, more than 300 restaurant operators want the government to lift the alcohol ban in 17 tourism provinces.

They also asked Prime Minister Prayut Chan-o-cha to allow night entertainment venues such as pubs, bars and karaokes nationwide to resume their businesses on Dec 1. 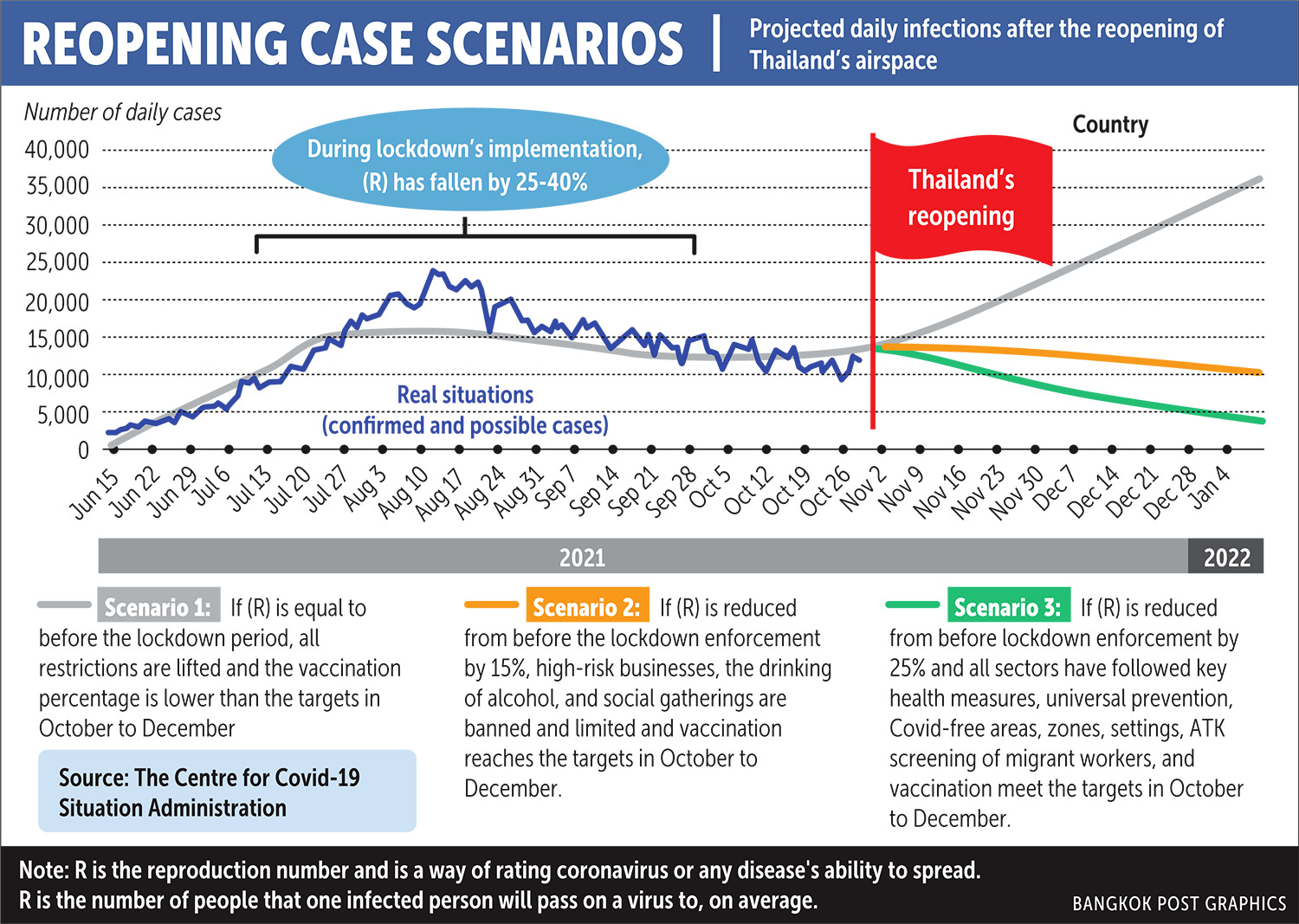 This comes as Taweesilp Visanuyothin, spokesman for the Centre for Covid-19 Situation Administration (CCSA), on Friday said that the CCSA approved key changes to the zoning, which also included a drastic cut in the number of dark-red provinces for maximum and strict controls from 23 to seven.

The seven provinces that will continue to be the dark-red zones are Chanthaburi, Tak, Nakhon Si Thammarat, Narathiwat, Pattani, Yala and Songkhla, Dr Taweesilp added.

Bangkok, Krabi, Phangnga and Phuket have been designated as "blue zones'', new tourist-oriented areas with no restrictions on alcohol consumption, starting Monday, he said.

Five provinces will be designated yellow, those under high surveillance: Nakhon Phanom, Nan, Bueng Kan, Mukdahan and Sakon Nakhon which are in the northern and northeastern border areas, Dr Taweesilp said.

Starting Monday, the 11pm-3am curfew will apply only in the dark-red provinces.

Working from home in the dark-red zones will apply to at least 70% of the government workforce and the private sector can go beyond that.

Elsewhere, the rates will be flexible, except for Greater Bangkok, where at least 70% of the workforce will be required to work from home.

There will be no gathering restrictions in the blue zones.

There will be no restriction in the blue zones.

The closing hour was set at 11pm in the red zones.

Alcohol sales and consumption will be banned in the dark-red, red and orange zones and allowed in yellow and blue zones.

Speaking after chairing a CCSA meeting, Gen Prayut said he needed the cooperation of all parties to ensure the country's reopening on Monday is a success.

The government would gradually reopen checkpoints for border trade. Buyers and sellers will not meet in person but deliver goods via no-contact areas.

He had instructed medical personnel to be ready to respond, including having field hospitals and quarantine areas ready, in the event of any Covid-19 outbreaks after the country reopens.

The government has already placed an order for the anti-viral Covid treatment drug molnupiravir so that the country would have a supply for quick administration if needed.

The government was also buying favipiravir and had ordered the local development of herbal medicines for initial treatment of Covid-19 patients.

He assured the people that the government would prevent an excessive influx of foreign visitors.

The "sandbox" reopening model introduced in Phuket in July proved to be effective, drawing more than 40,000 tourists, he said.

At the same time, he asked demonstrators to cooperate by protecting the national image and to avoid any action that would discourage visitors.